Trending Now
You are at:Home»Featured»Occupiers, Wayseers, and the Catholic Church
By Marc Barnes on November 15, 2011 Featured, Government & Politics 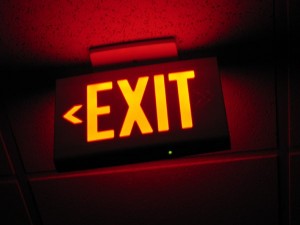 G.K. Chesterton, in his noble goal to make the life of a Catholic blogger unbearably easy, said that “the Catholic Church is the only thing that frees a man from the degrading slavery of being a child of his age.” You might think I cannot possibly add to such a perfectly rounded statement of truth. And in one sense you’d be right — I can’t — but dead wrong in another, for I have a bad habit of trying.

For if there is anything that can be said about the modern world, it is that stupidity abounds. Truly, there have been all sorts of cultures with all sorts of whack ideas, but we currently live with an absolutely unprecedented level of facepalm-I’m-moving-to-Hungaryism. Why? Because the current philosophy of our times is an inherent contradiction. The truth is that there is no truth. There is no right and wrong, and thus it’d be terribly wrong — and certainly not right — to force morality on another.

Relativism, baby. It’s what drives the modern world. Pro-abortion laws are drawn up under the philosophy that it is morally wrong to impose a moral standard. I sat in a high-school classroom where we all wrote down our personal definitions of truth and then voted for the best one. Catholic hospitals cannot force their views on others, so they are forced to provide contraception. Depressed yet? Don’t be.

So what can one expect of the movements and actions of a culture standing upon the foundation of relativism? What is the childhood of this age from which our Church saves us? Don’t expect frightful evil. Don’t expect exciting, daring rebellion against the system. Stupidity is utterly incapable of producing greatness, evil or good. Expect therefore awkward, embarrassing movements; short-lived and incoherent.

You don’t have to watch the whole thing. Well, you can; it gets pretty funny. I’m not saying the Wayseers are a legitimate movement — they are the manipulated followers of some one making a crap ton of money. No, it’s the existence of a following that makes me despair. (Chuckle first, despair later). Or take the Occupy movements. Legitimate complaints taken into account, they are movement largely united by their lack of anything to unite about. I have a friend who headed off to Occupy Wall Street because that’s where people “are doing stuff.” Yup. They certainly are doing stuff, no doubt about that. It’s a wonderful party of libertarians, illuminati conspiracy theorists, flaming liberals, communists, crazies, socialists, anarchists, conservatives, hippies, all there to tell Wall Street to…uh…

A philosophy as weak as Relativism cannot motivate a coherent movement. So what a fantastic, saving position the Catholic Church is in! She is one of the few forces in the world proclaiming absolutes. Her followers are free from the degrading slavery of the age, free from the chains of that bitter mandate — choose-your-own-truth. We have absolute economic and political answers to the issues of the Occupy movements. We have the ability to reject falsehood and embrace truth, for we have admitted Truth’s existence. The movements She supports are absolute movements, and they are winning.

Take for example, the pro-life movement. In the face of the pro-choice movement’s aging, vague and desperate cry, “don’t impose your belief on me!” the pro-life movement speaks in absolutes, free from the age. “This is a human being. Embryological science proves this. It is wrong to kill an innocent human being. Good philosophy proves this. Therefore, and please, stop killing human beings. What? We don’t speak like that these days? It’s not fashionable to speak in bold, absolute statements? Deal with it.” Have you ever noticed that the pro-choice response to absolutes is to go spinning off into vagueness? Into “but what if’s?” That is the slavery of this age that we are free from. That is the degradation we resist.

And now the majority of America is pro-life. Why? Because the resistance of the stupidity of relativism is fiercely attractive. When the house is burning and everyone is milling about, mumbling about the relative effects of fire, people are going to hearken to the man who stands up and says, “I know the way out! Follow me!”

It is the position the Catholic Church claims. Free from this age, she listens patiently to the world’s complaints that “you cannot know truth, there is no objective morality, life is what we make it, heaven can be here on earth, beauty is in the eye of the beholder,” etcetera ad infinitum, then firmly says, “Never mind all that. I know the way out.” In chant.

The point is this: My Dear Catholics, do not be afraid to proclaim the Gospel with confidence. There existed an age that demanded incredible subtlety, an age when heresies made actual claims and a time for delicate evangelization. This, the Age of Stupidity, is not it. This is an age that requires us to boldly claim absolutes, for no one else is doing so.

To the rest of you: I know the way out! Follow me!