Trending Now
You are at:Home»Featured»Occupy the Republic?
By Robert Struble, Jr. on October 16, 2011 Featured, Government & Politics 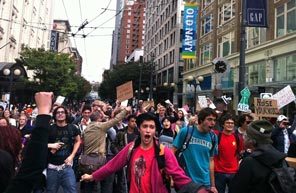 A memorable moment in the Occupy Wall Street movement this month took place in Atlanta, when Congressman John Lewis (D, GA) showed up and expressed a desire to address the assembly.  Rep. Lewis has a busy schedule, and when asked to wait his turn he walked out.  Elitist types on both ends of the political spectrum took it as rude, or insufficiently deferential, that the agenda was not altered to make way for the important man to speak immediately.

For a revolutionary situation, however, a snub may be contextually appropriate.  The overriding consideration is that the 99% (or the activist portion thereof) are trying to respond to the royal mess made by important people — “the 1%.”  In that context it is right and just that we the people move on our own to reorder the world, and that we rise up to address our own needs, rather than bowing to a system which caters mainly to the wants and preferences of the few.

“Occupation” in 2011, and the Tea Party some months before, may or may not exercise significant contemporary impact on the USA.  Or perhaps these movements will serve only as “seed plots of history,” like the revolutions of 1848, which have been described as apprenticeships for Europe in republican democracy.

The same uncertain forecast can be applied to the “Arab Spring.” The rebellions began with popular uprisings in Tunisia, resulting in the downfall of the President (January 2011).  Then, in one country after another populist insurgents rose against autocratic dictators, notably in Egypt, Libya, Yemen, and Syria.

A basic populist instinct common to the uprisings of recent months — Occupy Wall Street, the Tea Party movement and the Arab Spring — is the desire for genuine progress.  In varying degrees this desire is universal.  But in the so called advanced nations, or First World, real progress is difficult to distinguish from dross.  The bewildering complexities of bureaucratized society, as well as the separation of powers, make it challenging and time-consuming for citizens to distinguish gold from iron pyrite, tonic from toxin.

Thus the criticism being leveled at the Occupy movement — that they have, so far, advocated no particular reform agenda — is an invalid critique.  It is like choosing a surgeon before examining the patient.  You don’t propose cures before you identify the maladies.

The Occupy movement is still in the process of forming a consensus on which problems to prioritize.  Its “Declaration” in New York City sets forth a long list of grievances, using much the same literary format as America’s Declaration of Independence.  And the similarity extends beyond literature to substance, in that the document penned in Philadelphia during the American Revolution was likewise a list of grievances, not proposals.  For the particulars of reform, the Declaration (1776) awaited the Articles of Confederation (1781) succeeded by the US Constitution (1787).

As the old French Resistance leader, Stéphane Hessel, puts it in his Indignez-Vous (2010):

[T]he reasons to be indignant can seem today less clearly related, or the world too complex. Who’s doing the ordering, who decides? It is not always easy to differentiate between all the currents that govern us. We are not dealing any more with a small elite whose joint activities can clearly be seen.

Unlike the polity and the economy, however, the domain of culture is quite explicit.  Also it is at once the most depressing for Christians to contemplate, and the most promising.

First consider the pessimistic side of the cultural sphere:  Postmodern society in America is like Saturn who devours his own children, reminiscent of the worst years of the French Revolution – La révolution dévore ses enfants” (Danton).  The postmodernist revolutionary regime of today kills babies in the womb by the millions, while by the tens of millions it destroys religion and morality among America’s youth.  In place of the Holy Trinity, kids are taught to worship at the altar of a secular trinity — tolerance, diversity and choice.

More optimistically, however, the culture still has many citizens of good will, young and old.  Such people are increasingly outraged by the drift away from our country’s spiritual and ethical heritage.  Recent polling indicates that large majorities are not only angry, but perceptive enough to recognize that the nation is like a train which has jumped the track.

This feeling of intense concern is a good cultural indicator.  Indeed, if complacency was the prevalent feeling, and Americans exhibited no anger, we would be quite justified in pessimism:

He who is not angry where he has cause to be, sins.  For unreasonable patience is the hotbed of many vices; it fosters negligence, and incites not only the wicked but even the good to do wrong.  [Thomas Aquinas, Summa Theologica, quoting the attribution to St. John Chrysostom]

But to the extent that anger and outrage have given rise to the Tea Party and Occupy Wall Street, let us take heart.  We can be optimistic also about the extensive sympathy among Americans for the Arab Spring.  Furthermore there is hope abroad in many nations that someday we the people of the world’s greatest military and cultural superpower will rekindle the spirit of 1776.

After accepting my congratulations on his “Arab Spring,” a Middle Eastern acquaintance replied recently, “now we’re wondering when you Americans will have yours.”

Could it be that America is currently in the process?  If so I believe that Catholics have the duty to join and help set the direction.  If moral conservatives — maybe also some Tea Party advocates — enter into the Occupy movement, then the combination would be both more potent and more likely to produce something good.