Trending Now
You are at:Home»Learn & Live the Faith»Catechesis»On Eucharistic Existence
By Philip Primeau on January 21, 2014 Catechesis, Featured, Live in Christ 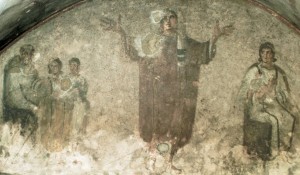 The death of Jesus Christ—the liturgy par excellence, the supreme oblation and fulfillment of Israel’s sacrificial system—occurred outside the holy precincts of the temple, thus demolishing the rigid dichotomy between the sacred and the profane. The Christian knows no “temple” but his body, wherein the Spirit dwells individually; and the church, wherein the Spirit dwells collectively.

By “church” I do not mean a sanctified structure, but the sanctified society of the men and angels on earth and in heaven. The early Christians met not in consecrated structures, like the pagans or the Jews, but in ordinary households. “Aquila and Prisca, together with the church in their house, send you hearty greetings in the Lord” (1 Corinthians 16:19). “Give my greetings to the brothers at Laodicea, and to Nympha and the church in her house” (Colossians 4:15). An echo of this primitive practice can be heard in the Liturgy of St. John Chrysostom, at the end of the Great Litany: “Lord, look upon us and upon this holy house in Your compassion.” Even today, Christian life—and in particular the mystery of holy communion—remains at heart something of a domestic affair: a mystical banquet wherein we recline, and dine, upon the “life-giving spirit” (1 Corinthians 15:45).

Christians’ ambivalence about temples was no doubt partially the product of persecution. However, it was also the result of their keen awareness of God’s transcendence, the cosmic significance of Christ’s sacrifice, and the radical newness of life in the Spirit. These realities impelled Christians to reject the crude materialism of ancient paganism and Judaism, while at the same time treasuring the reality of the body as God’s image, and the chief instrument whereby he is worshiped. As Minucius Felix wrote, “But do you think that we conceal what we worship, if we have not temples and altars? And yet what image of God shall I make, since, if you think rightly, man himself is the image of God? What temple shall I build to Him, when this whole world fashioned by His work cannot receive Him? And when I, a man, dwell far and wide, shall I shut up the might of so great majesty within one little building? Were it not better that He should be dedicated in our mind, consecrated in our inmost heart” (Octavius, XXXII).

With the tolerance and subsequent ascendancy of Christianity in the Roman Empire, the church adapted itself to freedom and growth, which included celebrating the mysteries in public structures designed specifically for that purpose. There was nothing sinister about this transition: in fact it was fitting and appropriate, especially insofar as churches were understood as symbols of the kingdom, icons in stone. But we must always bear in mind that churches are ultimately dispensable. There is in reality but one church: the assembly of the faithful in the Spirit, founded upon the prophets and the apostles, led by the shepherds of Christ, fed by Word and sacrament. The eucharist offered in a prison camp is as sweet and true as the eucharist offered in a grand cathedral—perhaps sweeter, perhaps truer.

The Christian does not need a temple because God does not demand sacrifice—at least not in the traditional sense—and he is not an idol of gold or stone, to be pampered and protected like a creature. As Athenagoras wrote, “The Framer and Father of this universe does not need blood, nor the odor of burnt-offerings, nor the fragrance of flowers and incense…though indeed it does behoove us to offer a bloodless sacrifice and ‘the service of our reason’” (A Plea for the Christians, XIII). Athenagoras derived this notion from St. Paul, who urged, “I beseech you therefore, brethren, by the mercies of God, that you present your bodies a living sacrifice, holy, acceptable unto God, which is your reasonable service” (Romans 12:1).

“Reasonable service” is not simply worship that is rational (for instance, offering God prayers rather than burnt animals). It is also— literally— “Logos-like worship,” worship after the likeness of Jesus Christ, the embodied Word, whose life and death were defined by loving obedience to the Father. From the condescension of the incarnation to the humiliation of the cross, Jesus could say, “I seek not my own will, but the will of my Father who sent me” (John 5:30).

The Christian sacrifice is the sacrifice of Christ, who “offered himself to God through the eternal Spirit” (Hebrews 9:14). This oblation is ephapax, “once for all” (Hebrews 7:27), although it is re-presented in mystery to this day. What was the nature of this sacrifice? Some Christians mistakenly view the cross as a blood offering that appeased the wrath of God. This is not only unbiblical but anti-biblical. The sacrifice of the cross was not an offering of blood, but of the will:

“When Christ came into the world, he said, ‘Sacrifices and offerings you have not desired, but a body have you prepared for me; in burnt offerings and sin offerings you have taken no pleasure. Then I said, Behold, I have come to do your will, O God, as it is written of me in the scroll of the book.’ When he said above, ‘You have neither desired nor taken pleasure in sacrifices and offerings and burnt offerings and sin offerings’ (these are offered according to the law), then he added, ‘Behold, I have come to do your will.’ He does away with the first in order to establish the second. And by that will we have been sanctified through the offering of the body of Jesus Christ once for all’ (Hebrews 10:5-10).

Christ’s entire existence was one of loving submission and self-offering to his Father. It was an existence of “eucharist”: thanksgiving. He gave himself perfectly to the Father in life—and in death—with praise aplenty. He is God’s “Yes” to man, and man’s “Amen” to God. Through his obedience in life he sanctified life, and through his obedience in death he destroyed death, by meriting the resurrection. “Christ is risen from the dead, trampling down death by death!” By the Spirit we are “inserted” into Christ: his unfailing love becomes our unfailing love; his total obedience becomes our total obedience; his perfect humanity becomes our perfect humanity. In short, we give him our lives, and we receive his life in return. We are given the glorious fruits of his “love until the end” (John 13:1).

This life in Christ—this life of self-offering to the Father through the Spirit—is the substance of our “reasonable service.” The Christian is truly a “living sacrifice.” His entire existence is one great eucharist: a sacrifice of thanksgiving through, with, and in Jesus Christ. The church is not merely a cult, like so many other religions, which are built around the perpetuation of a set of rituals, but a “spiritual house … a holy priesthood [which]offers spiritual sacrifices acceptable to God through Jesus Christ” (1 Peter 2:5). We are for God, toward God, and in God. “We are the true adorers and the true priests, who, praying in spirit, sacrifice, in spirit, prayer—a victim proper and acceptable to God, which assuredly He has required, which He has looked forward to for Himself! This victim, devoted from the whole heart, fed on faith, tended by truth, entire in innocence, pure in chastity, garlanded with love, we ought to escort with the pomp of good works, amid psalms and hymns, unto God’s altar, to obtain for us all things from God” (Tertullian, On the Lord’s Prayer, Chapter XXVIII).

It is not that nothing is sacred to the Christian. Rather, everything is sacred. The liturgy is no longer an isolated cultic ritual distinct from ordinary life, for “the Most High does not dwell in houses made by hands” (Acts 7:48). It is not simply that the liturgy is the center of life. Rather, life itself is “liturgized.” As St. Peter Chrysologus wrote, “Each of us is called to be both a sacrifice to God and his priest. Keep burning continually the sweet smelling incense of prayer. Let your heart be an altar. Then, with full confidence in God, present your body for sacrifice. God desires not death, but faith; God thirsts not for blood, but for self-surrender. God is appeased not by slaughter, but by the offering of your free will.”

Christian existence is eucharistic existence. “We do well always and everywhere to give you thanks!” Everything is eucharist, because everything is offered to God in Christ with abundant thanksgiving. “All that is created by God is good, and nothing is to be rejected if it is received with thanksgiving, for it is made holy by the Word of God and prayer” (1 Timothy 4:4-5). This offering is manifested in a special and singular way during the Mass, wherein the whole Christ, Head and Body, are united and offered as one to the Father through the Spirit. As St. Augustine writes, “This is the sacrifice of Christians:  we, being many, are one body in Christ.  And this also is the sacrifice which the Church continually celebrates in the sacrament of the altar, known to the faithful, in which she teaches that she herself is offered in the offering she makes to God.” In the eucharistic oblation, the passion of the Christian is united to the passion of the Christ,

The bread and wine of this tremendous mystery symbolize not only the body and blood of the Lord, but also the entirety of creation, which Christ offers through and with his people. As St. Irenaeus explained, “As we are His members, we are also nourished by means of the creation (and He Himself grants the creation to us, for He causes His sun to rise, and sends rain when He wills). He has acknowledged the cup (which is a part of the creation) as His own blood, from which He bedews our blood; and the bread (also a part of the creation) He has established as His own body, from which He gives increase to our bodies” (Against Heresies, Book V, Chapter 2).

Despite the singular importance of the Mass, we must be on guard against an artificial separation of life and liturgy. We cannot allow the sacrament of the altar to be “objectified.” It must be understood as the “source and summit” of an existence of loving self-sacrifice in and through Jesus Christ.  “Rejoice always, pray without ceasing, give thanks in all circumstances; for this is the will of God in Christ Jesus for you” (1 Thessalonians 5:16-18). Tertullian wrote that true sacrifice is the “costly and noble sacrifice of prayer dispatched from the chaste body, an unstained soul, a sanctified spirit, not the few grains of incense a farthing buys” (Apology, XXX).

Was not Christ’s work a sort of living, fleshly “prayer” from a chaste body, an unstained soul, a sanctified spirit? This is therefore the essence of the life in Christ: to give ourselves to the Father chaste, unstained, and sanctified through his Son and Spirit. The eucharist we offer at Mass is the wellspring and climax of our “eucharistic existence.” Through our Lord Jesus Christ, by the working of the Holy Spirit, we offer spiritual sacrifices of thanksgiving moment to moment, day to day, season to season. We do not simply imitate the mysteries which we celebrate: we live them in full. “I am crucified with Christ: nevertheless I live; yet not I, but Christ lives in me: and the life which I now live in the flesh I live by the faith of the Son of God, who loved me, and gave Himself for me” (Galatians 2:20).