Trending Now
You are at:Home»Featured»On Precedence and Authority: A Reply to Donal Anthony Foley
By Kevin Symonds on May 26, 2011 Featured, Vocations

The other day, I learned that British author Donal Foley has written on the subject of “The Lady of All Nations.”[i]  Foley is the original English translator of the Vatican document Normae Congregationis (NC), on the norms for discernment of apparitions.  Knowing Foley’s work in private revelation, I was interested to read his remarks on the “All Nations” case.

Foley offers a very sobering look at “difficulties” with the Amsterdam claims.  In essence, he effectively issues a challenge to its supporters to provide an explanation, especially given that these difficulties were once shared not only by the then local Ordinary, but also the Holy See and never publicly explained.[ii]

There is just one tiny matter for discussion: the Bishop of van Haarlem, Josef Marianus Punt, is one of those supporters.  He declared in 2002 the claims to consist of a supernatural origin.[iii]

Of course, I am being sarcastic when I say the above is a “tiny” matter.  It is in fact quite significant as one of the most earnest and a stressed issue in the Church’s theology of private revelation is obedience to the local Ordinary.

Now, here is a local Ordinary who has approved claims of private revelation and people are still questioning the matter.  This creates a difficulty.  NC clearly upholds the right of a qualified group of the faithful to request intervention (cf. NC II:2, III:3 and IV:1a), however this is in the context of before a judgment has been reached.[iv]  NC has no protocol for what happens after a judgment has been made and promulgated.[v]

This endeavor to question Bishop Punt’s positive judgment leads into unchartered waters with respect to important areas of the Church’s theology of private revelation.

In the above theology, there is a little known — and thus little stressed — doctrine: Local Ordinaries, even Popes, can err in such matters.  There is no question of infallibility as this charism extends to Divine, not private, Revelation.

Furthermore, and on a practical level, Rome has never overturned the judgment of a local Ordinary in contemporary times.  I don’t know of any case in 2000 years in which Rome has ever done such a thing.[vi]  It is also highly unlikely that a positive judgment has ever been re-thought and later made into a negative judgment.

It is highly unlikely as well that Rome would break with either precedent unless there was a grave matter affecting a large part of the Church (to borrow from NCs phrase). There would also have to be a significant event to raise the matter to the Holy See’s attention and require immediate action.  Short of proving (and beyond any shadow of doubt) gross negligence on the part of Bishop Punt, and demonstrating to the Holy See that grave injustice to faith and morals has, is and will be done, one will be hard-pressed to petition Rome to overturn Punt’s decision.

It is with great sobriety that I say given the above, one false step and a very delicate theological and temperamental political balance could become agitated. The result would be the endeavor backfiring and damage inflicted upon the unity of the Church.  This is a grave moral responsibility.

Foley’s impressive work with private revelation deserves much respect.  It is because of this respect that I wish to state that if “All Nations” apologists are to be called to the table of discussion, it must be borne in mind that they enjoy the full support of the local Ordinary and thus, by extension, Rome. 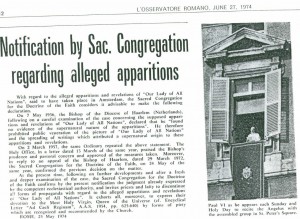 With regard to the alleged apparitions and revelations of “Our Lady of All Nations”, said to have taken place in Amsterdam, the Sacred Congregation for the Doctrine of the Faith considers it advisable to make the following declaration.

On 7 May 1956, the Bishop of the Diocese of Haarlem (Netherlands), following on a careful examination of the case concerning the supposed apparitions and revelations of “Our Lady of All Nations”, declared that he “found no evidence of the supernatural nature of the apparitions”.  He therefore prohibited public veneration of the picture of “Our Lady of All Nations” and the spreading of writings which attributed a supernatural origin to these apparitions and revelations.

On 2 March 1957, the same Ordinary repeated the above statement.  The Holy Office, in a letter dated 13 March of the same year, praised the Bishop’s prudence and pastoral concern and approved of the measures taken.  Moreover, in reply to an appeal of the Bishop of Haarlem, dated 29 March 1972, the Sacred Congregation for the Doctrine of the Faith, on 24 May of the same year, confirmed the previous decision on the matter.

At the present time, following on further developments and after a fresh and deeper examination of the case, the Sacred Congregation for the Doctrine of the Faith confirms by the present notification the judgment already expressed by the competent ecclesiastical authority, and invites priests and laity to discontinue all forms of propaganda with regard to the alleged apparitions and revelations of “Our Lady of All Nations”.  It exhorts all, moreover, to express their devotion to the Most Holy Virgin, Queen of the Universe (cf. Encyclical Letter “Ad Caeli Reginam”, A.A.S. 1954, pp. 625-640) by forms of piety which are recognized and recommended by the Church.

[v] The 1983 Code of Canon Law states that the Christian faithful have the right to make known their needs and desires to their Pastors (canon 212 §2-3) and this right can be invoked.  The question, however, is how does one go about the matter in an appropriate and fitting manner?

[vi] This is not to say Rome never has, rather I simply have not encountered such a thing at this time.  If anyone can produce a citation for a case, I would greatly appreciate your charity.