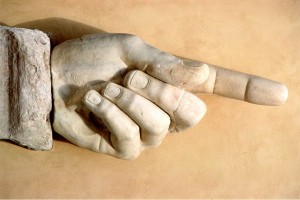 When I converted, I was overjoyed to be part of the One Body, but soon after discovering Catholic media, I was shocked by the criticisms — even condemnations — of some of the bishops. To a newcomer, that looks about as smart as poking your finger in your eye. Usually the justifications are that we need to keep the bishops in line, and I admit that in my kitchen I’ve expressed concern over some decisions.

With time, however, things started to make more sense, and without fail I sensed that the cause of my concern was the shallowness of my own knowledge, not the bishop’s. That’s the whole point of obeying and respecting an authority. Bishops are hierarchical authorities.

Lumen Gentium, among documents referenced therein, explains that if a bishop is “teaching in communion with the Roman Pontiff,” he is “to be respected as a witness to divine and Catholic truth.” (25) The bishop speaks in the name of Christ, and in matters of faith and morals we are to accept his teaching and “adhere to it with a religious assent.”

But what about difficult or controversial public or political decisions in an individual diocese? Well, the way I see it, it is impossible for a lay person to know all that goes into his decision-making process, and it just seems backwards to mistrust a man who authoritatively speaks in the name of Christ. Why would we, the faithful, have so little faith in a man of God? It seems better to withhold public criticism and instead offer prayers, trusting him as a loving father who only wants what is best for his family.

As many wives know, public questioning of a man’s familial and fatherly aptitude only hinders him from fulfilling his duties with effectiveness and dignity; he needs his family’s praise and loving support. If there is disagreement, we know too that within families, private discussions held in charity can go far to solving misunderstandings. Publicly broadcasted criticisms only make things worse.

Remember that saying? “If you point a finger, there are three pointing back at you.” It’s a good saying to remember before making any public criticism of any other person, ever. Truly, life is much easier when we free ourselves to focus on our own faults, for we have the power to change those. We also have the obligation to fulfill our own role in the Church. After all, even fingers can play a vital role in the functioning of the body, but not if they are stuck in the eye.