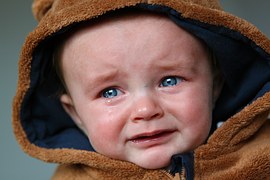 A boy falls and skins his knees. A boy wrestles in the living room and bonks his head on the coffee table. A boy tries to field a ground ball at shortstop, only to take a bad hop that bloodies his nose, or gets plowed by a much bigger boy on the football field.

“Boys will be boys,” someone will tell the parents.

A boy with a wandering mind gets several poor grades on some math tests, prompting the teacher to send a note home. A boy crushes on a girl, then sees her holding hands with another boy. A boy is left out from the invitation list for a sleepover at a classmate’s house.

“Big boys don’t cry,” the boy will hear from the ER nurse or the teacher or mom and dad or the coach. Is that what we truly want from “big boys?”

Most men heard that cliché during boyhood. The tears might be welling in the corners of the lad’s eyes when someone says, “Where does it hurt? Just rub it and get back on the field.” A tear might be tracing a wet line down the little guy’s cheek when someone says, “You’re grounded until you get those grades up.” The boy buries his face in his arm to hide the tears when someone says, “There’s always going to be another girl who comes along. Besides, you’re too young for a girlfriend.”

Big boys don’t cry? That’s a lie. Big girls also cry. So do grown women and men. It’s human to hurt and to be sad, to fear and mourn, as well as to shed tears of wonder and jubilation. Weeping is healthy, even biblical.

In the Book of Revelation, we learn that God will wipe away every tear as He will abolish death and mourning and pain. In the First Book of Samuel, we read that David and the Hebrew people “wept until there was no strength in them to weep.” Job said his face was “flushed from weeping.” The writer of Psalm 39 asked the Lord to “give ear to my cry” and to “not be silent at my tears.” The writer of Psalm 42 bemoaned that “my tears have been my food day and night while they say … Where is your God?”

In his farewell speech to the Ephesian elders, Paul said he had served the Lord with tears and trials. When Peter denied knowing Jesus the third time and then heard the rooster crow, “he went out and wept bitterly.” Jesus cried over the fate of His beloved Jerusalem. And our Lord showed the sincerity and depth of His full humanity when friends Mary and Martha greeted Him on the way to the tomb of his friend Lazarus, as related in John’s Gospel.

The ability to cry is a blessing. Displaying such emotion reminds us that we are connected to other people in a way mere words can’t express. Tears are a gift. They reveal what is really important to us when we try to hide such feelings. Instead of shortcoming, they unveil a warm vulnerability and greater fulfillment of what it means to be a Christian man or woman — hand-crafted by God with so many features: compassion, mercy, love, wonder, delight.

When suffering through my darkest times of depression, I have sobbed in isolation from the rest of the world. No, I don’t want anyone to see that. But I have encountered the alternative; taking medication to subdue the energy-sapping, inexplicable wailing, I have agonized through times of sadness, grief and desolation without shedding one tear. That dryness on the outside when my soul is convulsing on the inside is so much more excruciating.

Yes, I can cry watching a rerun of “The Waltons” or a well-acted movie. I also cry when seeing my children or grandchildren display love, on Holy Thursday and Easter, when missing a dear friend, in prayers of gratitude.

Yes, God has cried. The Son of God and Son of Man does not have a stony heart, but rather a heart of flesh, a feeling heart, an emotional heart.

And we are made in his image and likeness.