The original copy of NC comprised a total of four pages in Latin.  It was signed by Francis Cardinal Seper, then Prefect of the CDF.  It was undersigned by Fr. Jerome Hamer, O.P., then Secretary of the CDF.

The document as a whole provides general Norms Ordinaries are expected to use if a claim of private revelation arises in their jurisdiction.  Because these are general Norms, there is a greater history and theological context behind them that must be borne in mind as each step and process outlined in NC is performed.

One of the most important keys to understanding NC can be found in the opening paragraph of Cardinal Levada’s Preface.  He says, “…the Norms were sent to Bishops for their information, without, however, being officially published, as the norms were given for the direct aid of the Pastors of the Church.”  In other words, NC was considered by the CDF to be an “in-house” document and written accordingly. 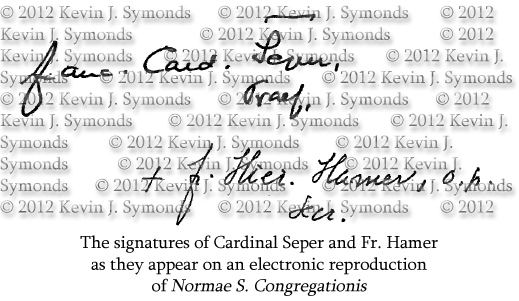 The Pastors of the Church are presumed to know and understand the inner life of the Church.  This includes not only her theology, but also her laws and legislation.  NC is deeply affected by this presumption as not a few terms and concepts are embedded within the text, requiring a trained eye.  Their theological and pastoral formation affords that training to the Pastors of the Church.  Anyone who lacks this training may find it difficult to read the document, leading to possible misinterpretations or at least have an unbalanced approach to it.

Concerning the text itself, NC begins with a Prefatory Note followed by four sections, each with its own focus.  The Prefatory Note itself outlines the reasons for the composition of the document.  It also gives a skeletal outline of the process by which the competent ecclesiastical authority is to judge a claim of private revelation.

The first section lists “positive” and “negative” criteria by which the ecclesiastical authority is to judge an alleged private revelation.  These include criteria such as the mental health and stability of the one claiming the alleged revelation, his or her sincerity and docility to ecclesiastical authority, etc.  These criteria are not “peremptory,” as the Vatican says within the section, but are “indicative,” meaning they are not exhaustive.

The second section provides four ways the competent ecclesiastical authority is to act with respect to a claim of private revelation.  The authority can or must:

The third section states who is the “competent authority” spoken of above to intervene in a claim.  In accordance with the tradition, emphasis is placed upon the local Ordinary who is expected to fulfill the duties and obligations that fall to him.  If the case requires it, the claim can be examined by the local Conference of Bishops.  If the case requires still further examination, the Holy See can conduct its own.

The fourth and final section is on the intervention of the CDF.  This intervention can occur if requested by the local Ordinary after his own labors, or by a qualified group of the faithful that is not “motivated by suspect reasons.”  The CDF also upholds its right to intervene of its own authority in graver cases, especially those that affect a “larger part of the Church.”  The section ends by saying the CDF judges the manner in which the local Ordinary conducted his examination of the facts and to initiate a new examination if necessary.

The document ends with a short note on Paul VI’s approval of the document and its promulgation by the CDF.

Overall, NC provides a very balanced presentation.  It reflects the larger theological and pastoral tradition of the Church and has greater meaning in that context.  The document clearly explains various criteria for discerning a claim to private revelation as well as the various levels of authority and the role of each.  One level does not give undue weight to the other, which reflects the unity of the Church and the Episcopate.

For a document on general Norms, the Church has presented her faithful with a beautiful text. To borrow from Cardinal Levada’s Preface (4), may this text,

… aid the Pastors of the Catholic Church in their difficult task of discerning presumed apparitions, revelations, messages or, more generally, extraordinary phenomena of presumed supernatural origin….[may it also]be useful to theologians and experts in this field of the lived experience of the Church, whose delicacy requires an ever-more thorough consideration.