Trending Now
You are at:Home»Featured»On the Wisdom of God
By Philip Primeau on November 14, 2011 Featured, Live in Christ 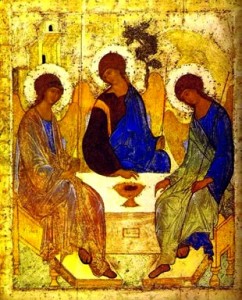 We testify that Jesus of Nazareth is the Incarnate Word, the very Self-expression of the Deity. This Word is the Father’s all-encompassing Articulation, the Idea in which all ideas subsist. It is in and of the Father, yet somehow distinct.

In the Old Testament, this Being typically bears the name Wisdom. Wisdom is described as the Godhead’s majestic manifestation: “So She is the exhalation of the power of God and the emanation of the pure glory of the Almighty … The Image of His goodness” (Book of Solomon 7:25-26). In the New Testament, Saint Paul similarly calls Christ “the Image of the invisible God” (Colossians 1:15).

That same chapter of the Book of Solomon proclaims Wisdom the “Artisan of all things” (v. 21) and “holy, only-begotten … all-powerful, all-surveying (vv. 22-23). Likewise, the Beloved Apostle writes of the Son: “All things were made by Him; and without Him was not anything made that was made” (John 1:3).

The union between Father and Wisdom, that is, his Son, is intimate:  “I was He in Whom He rejoiced; daily and continually I was gladdened by His face” (Proverbs 8:30). This love is confirmed by Jesus during His earthly ministry: “The Father loves the Son” (John 3:35). Wisdom “comes from the Lord” yet is simultaneously “with Him forever” (Sirach 1:1). This relationship exceeds human categories; its richness is beyond measure. The two are distinct but not separable: “Those who serve Her will minister to the Holy One; the Lord loves those who love Her” (Sirach 4:14).

Indeed, the Father is only known through Wisdom: “Who has known Your counsel unless You have given him Wisdom and sent him Your Holy Spirit” (Solomon 9:17). This striking line, written in the first century before Christ, actually alludes to the Trinity in its fullness!

Wisdom is restorative as well as creative. Hers is the power of salvation: “When a righteous man was sold, Wisdom did not abandon him, but delivered him from sin” (Solomon 10:13). She is righteousness: “Whoever holds Her fast will obtain glory” (Sirach 4:13).

By Wisdom man was created and by Wisdom he is redeemed. It was written, in prophesy of the saving Cross: “She is a tree of life for all who cleave to Her” (Proverbs 3:20). She also “steers the righteous man by a paltry piece of wood” (Solomon 10:4).

God as Being-in-communion was not created by Christianity, just clarified. Around the time of Christ, the Jewish writer Philo declared, in his commentary on Abraham’s meeting with the three angels, that though God is One, He is also triadic. The first and greatest angel is “the Father of the universe, Who in the sacred scripture is called by His proper name, ‘I Am That I Am’; and the Beings on each side are those most ancient Powers which are always close to the Living God, One of Which is called His Creative Power, and the Other His Royal Power. And the Creative Power is God, for it is by this that He made and arranged the universe; and the Royal Power is the Lord, for it is fitting that the Creator should lord it over and govern the creature.”

Contemporary Judaism’s strict monotheism is a medieval innovation spurred by Islamic influence. It is not surprising that rabbinical Judaism rejects the wisdom texts of Solomon and Sirach, both of which are brimming with references to the Trinity, and especially the activity of the Wisdom (=Word/Son). The rabbis, not the apostles and church fathers, broke continuity with historic Israel in their narrow-minded insistence of a monadic deity. Ironically, rather than protecting the unique dynamism of the God of Abraham, Isaac, and Jacob, this decision nixed any possibility of genuine fellowship with the Living Lord by relegating and restricting His intervention in space-time to a book, after the style of Islam. This is why it is so important for Christians, especially Catholics, to resist the label of “People of the Book.” We are, rather, People of the Living God.

Anyway, Christ reveals Himself clearly as the incarnation of Wisdom, this wonderful Divine hypostasis, a Being both dynamic and redemptive: “Wisdom is vindicated by all Her children” (Luke 7:35). As Wisdom, He is bound inextricably with the Father: “Believe you not that I am in the Father, and the Father in Me … The Father dwells in Me” (John 14:10).

When He told the disciples, “Take My yoke upon you, and learn of Me; for I am meek and lowly in heart: and you will find rest unto your souls” (Matthew 11:29), He was only repeating the age-old truth:

“Put your feet into Her fetters,
and your neck into Her collar.
Put your shoulder under Her and carry her,
and do not fret under Her bonds.
Come to Her with all your soul,
and keep Her ways with all your might.
Search out and seek, and She will become known to you;
and when you get hold of Her, do not let Her go.
For at last you will find the rest She gives,
and She will be changed into joy for you.”
–Sirach 6:24-28

The Living God, it may be said, is one by union rather than unity; by highly personal love rather than some impersonal force or necessity. So speculates Pope Benedict XVI, then Joseph Cardinal Ratzinger, in his classic Introduction to Christianity (1990). The mystery of God’s inner wealth, His simultaneous existence as One and Several, is first witnessed in the pages of the Old Testament. It is not the product of Greco-Roman paganism or Hellenistic philosophy (though humanity’s natural affinity for polytheism may be misdirected hunger for the Triune Godhead). The Trinity — whereby God transcends the dualism to which man’s mind is conceptually enslaved — is the enduring testimony of Israel, the People of God, prophets and pilgrims and priests of the Lord scattered among the rebellious nations.

Glory be to the Father, and to the Son, and to the Holy Spirit, One God forever and ever, amen!