Trending Now
You are at:Home»Learn & Live the Faith»Apologetics»On the Zavala Affair
By Louie Verrecchio on January 13, 2012 Apologetics, Columnists, Featured 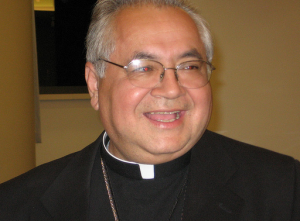 The Archdiocese of Los Angeles, the largest in the United States, rang in the New Year with some disturbing news: Auxiliary Bishop Gabino Zavala had resigned in shame after publicly admitting to having sired two children with the same woman more than a decade ago. (I use the word “sire” intentionally, as “fathering” is something altogether different.)

In an official statement released on January 4, Archbishop José Gomez reported, “Bishop Gabino Zavala, auxiliary bishop for the San Gabriel Pastoral Region, informed me in early December that he is the father of two minor teenage children, who live with their mother in another state.”

“Bishop Zavala also told me that he submitted his resignation to the Holy Father in Rome, which was accepted. Since that time,” the statement continues, “he has not been in ministry and will be living privately.”

Archbishop Gomez described the news as “sad and difficult,” and it most certainly is.

Any time a clergyman violates his vows (even if the details are never made public), the entire Body of Christ is wounded in a particularly profound way. When indiscretions such as these do become public knowledge, however, the faithful are necessarily scandalized and the reputation of the Church is sullied.

The way in which the aftermath of the Zavala affair is handled is therefore very important: like it or not, with the eyes of the world watching, it’s going to be a “teaching moment,” one way or the other.

So, how did the Archdiocese of Los Angeles decide to seize the opportunity?

According to Archbishop Gomez’s statement, “The Archdiocese has reached out to the mother and children to provide spiritual care as well as funding to assist the children with college costs. The family’s identity is not known to the public, and I wish to respect their right to privacy.”

“Funding to assist the children with college costs…” Did you catch that? In other words, the Archdiocese has chosen to address this scandal, not so much as a teaching moment, but as a “public relations” moment.

Now, don’t misunderstand me. I don’t envy Archbishop Gomez in the least. He had his hands full in Los Angeles well before the Zavala scandal came along.

I also want to make it clear that I genuinely feel for the children, who are clearly innocent victims.

As sinners each and every one, we should also feel true empathy for their mother and for Bishop Zavala too. God knows that all of us will one day stand before the judgment seat in desperate need of His mercy.

So, by all means, let us offer “spiritual care” and prayers on behalf of all concerned, but tuition assistance?

How do us parents-in-the-pews apply for help with funding our children’s college costs?

Let me guess – this particular benefit is being made available only to the offspring of serially unfaithful clergymen while we just get to underwrite the whole thing.  Am I the only one who finds this preposterous?

According to an article in the National Catholic Reporter, “it appears that one of the factors that brought this story to light was the complaint by the mother that Zavala was not providing for the education of their children, including their future college education.”

Until I read this, I had simply assumed that Bishop Zavala had finally decided that living the lie was just too much to bear. Now, I wonder. Maybe it wasn’t so much the voice of his conscience that brought this matter to a head, but rather the threats of the mother.

In any event, if the Reporter story is true, it would seem that the Archdiocese is operating under the mistaken impression that it needs to go into “full damage control” mode. This, I can only assume, is a knee-jerk reaction fueled by the memory of “clergy sex scandals” past that almost always meant the homosexual molestation of minors and a pending lawsuit.

My guess as to how things progressed? Call me crazy, but I imagine it went something like this:

The brilliant idea to voluntarily subsidize the kids’ college tuition was initially drawn up by the Archdiocesan P.R. Department in consultation with the Legal Affairs Sexual Scandal Subcommittee, at which point the proposal was then submitted to the Office of the Archbishop who, acting on the advice of the Office of the General Counsel, provided his official “get ‘er done.”

So, what have we learned?

In addition to whatever insight we gained into the episcopal priorities of Bishop Zavala, who was hailed in the Reporter as “a highly progressive liberationist,” we also discovered why so many people tend to view the Catholic Church as just another corporate enterprise.