Trending Now
You are at:Home»Featured»One Story Leads to Another in Kenya
By Luke Armstrong on February 21, 2013 Featured, Those in Need 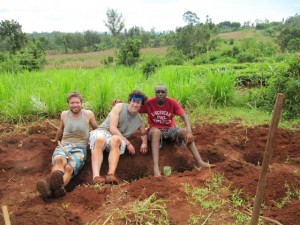 In January, Catholic Lane shared the story of two young men from Bismarck, ND visiting Kenya for the first time with their adopted AIDS orphan brother.  It was a story that had come full-circle, of an AIDS orphan growing up and returning home to help other orphans. Here is part II.

We wake up early on the first day of construction to a brief breakfast of fry bread and coffee just as the sun throws hints of its rise on the horizon. No winter comes here in Kisii, Kenya and in every direction are miles of green hills kept lush by frequent rains.

On the way to the building site, Calvin signals a row of trees reaching 50 feet into the air. “I planted those,” he says, “just before I came to the U.S.” 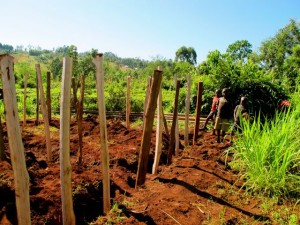 These are the physical markers of passing time. Other markers, less materially dramatic, paint the rest of the story. These include Calvin and Joash’s diploma from Saint Mary’s Central High School, in Bismarck, ND; Calvin’s four-year college degree from The University of Mary; Joash’s NCAA track and cross country trophies, and countless other markers stretching a decade into the past.

Our presence on a building site mark’s Calvin’s return to his childhood home and his dream to help another family of three young boys who also lost their parents to AIDS.

When I was in high school, my parents took in Calvin and then two years later, his brother Joash, orphans from Kenya. My parents were not seeking to adopt, but were not closed to it when Evan Beauchamp, the missionary leading the Bismarck Diocesan Mission, asked them if they would.

After reading a book, which planted the seed of a dream in Calvin, he’d spent the last year petitioning Evan to take him to the United States, where he wanted to study to become a doctor—a pipe dream for an orphan in a poor village in rural Kenya.

Initially, Evan told Calvin this was not possible. But if Calvin can be characterized as anything, it is persistent. After a year of pleading, Evan relented and said he’d see what he could do. He knocked on a lot of doors that didn’t open. Finally, he thought of my family, his thinking being, well the Armstrongs already have eight kids, what’s one more?

A New Home in Kenya 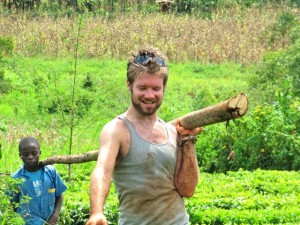 It wasn’t our original impetus for coming to Kenya, but after we read an email from Calvin, it became our reason for being here. Calvin had just finished medical school in The Caribbean and was back in Kenya to get a visa for his clinical rotations in the US. While back in his native village, he met two AIDS orphans, Samuel (15) and Simon (13) a half-kilometer from where he and his brothers had been orphaned by the same cause. (Another older brother, age 18,  had dropped out of school and was working in a mill in another town.)

These two brothers were being looked after by their grandparents, who gave them all they could, which amounted to a place to sleep and a meal a day—but not enough not keep them in school. 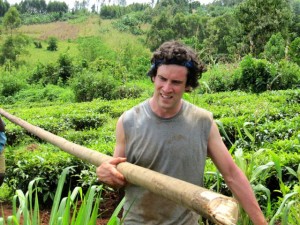 Calvin sent an email to rally the troops. Everyone in our family got on the fundraising horn. My dad on the radio, my mom writing, me blogging, even my brother John, who is Simon’s age, helped by donating some of his Christmas money for the boys to buy books. Enough was directed to the Diocesan Mission to build the orphans a house and put them in a good school. My brother Tyler and I left for Kenya to meet Calvin, ready to assist in the construction in a home for Samuel and Simon. 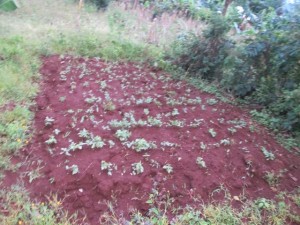 We met Samuel and Simon the evening after the first day of construction. “My father is buried here,” Samuel pointed to a vegetable garden where beans had just sprouted. A few yards away, he pointed to a patch of nepi grass, the kind they feed to cows, “my mother is buried there.”

He signaled the graves without emotion, like he was pointing out the plants above and not the final resting place of both his parents below. His father died in 2005; his mother in 2010. Both were victims of AIDS. 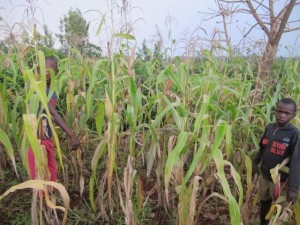 Tyler, Calvin ,and I followed the two boys down a narrow, muddy trail to their grandparent’s house. Their grandfather is a graying man who supports himself with a cane. Their grandmother is a trembling woman with a strained gait. Both carry solemn expressions and seem to know that they won’t be around much longer to look after their parentless grandchildren.

We arrived at their grandparent’s home as the sun was setting, and sat around a battered table in their mud hut. The cicadas began their song, one that would grow in volume as the darkness increased.  When night fell fully, we were left in darkness. There were no streetlights outside, no artificial illuminations—complete and utter darkness broken only by our voices and the cicada’s song.

“You see,” Calvin said, “They don’t have a way to do their homework after dark. They can’t even afford candles.”

Calvin turned to me to indicate I begin the meeting. It was as solemn as an occasion as I’d ever been part of. On both sides of the table, promises made would extend for years.

With Calvin translating, I explained to the two boys that Calvin’s parents had also died of AIDs. “Joash and Calvin,” I said, “Are my brothers who grew up in this village. Now Joash is studying to be a nurse and Calvin a doctor.”

“What do you want to be when you grow up?” I asked them. Samuel, the oldest said he wanted to be a doctor. Simon wanted to be a pilot. Life’s deck is stacked considerably against either profession. But the same could have been said of Calvin and Joash’s plans a decade ago. 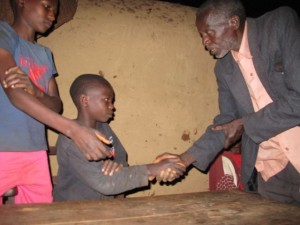 “You have to get the best grades,” Calvin interjected, “number one and number one.”

These were not the whimsical bargains of children, but the solemn promises of men who understood what their vow entailed. 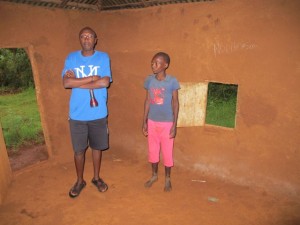 With our agreement  made, the boys told us what they remembered about their parents. In the African culture, the dead and the living walk together. Those living carry the spirit of those who have passed on.

Both boys remember what their mother told them before she died. “I am sick,” she told them, “But you are well. If you walk humbly, stay away from bad influences, and get an education, you will be okay.”

Then the boy’s uncle told Calvin a story about his mother that he’d never heard. After their father died Calvin and Joash sometimes stayed with relatives and their mother would have to stay home alone. She was afraid of the dark, as many here are, worried of witches and other dangers, real and imagined that lurk in the African night. Someone from Simon and Samuel’s family used to come and stay with her, so that she would not be afraid.

Calvin smiled, and let out a hearty chuckle, “I never knew that. Wow.” For an orphan, any new story about a parent is held dear.

Today we don’t know how Samuel and Simon’s story ends. But we know that now they have a home, and enough support to attend school. We believe they are serious in their promise to work hard towards a life free of the disparaging poverty common in this region. We hold the hope that ten years from now, when trees planted today tower 50 feet above the earth, Simon and Samuel will be where they dream to be.

Luke Maguire Armstrong (LukeSpartacus.com) was a baby, who became a boy, who became a man. Once he fought a bear and almost died. Haters later claimed it was “only a raccoon” and he was “acting like a little girl.” Between 2008-2012 Luke directed the educational development NGO Nuestros Ahijados in Guatemala. This work was featured on ABC news 20/20 with Christiane Amanpour and in The Huffington Post. He is the author of How We Are Human and iPoems for the Dolphins to Click Home About. Visit him at LukeSpartacus.com and follow him @LukeSpartacus.