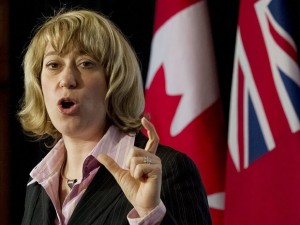 Last Wednesday’s startling remarks from the Ontario Liberal Government’s Minister of Education Laurel Broten prohibiting teaching against abortion in Catholic schools have caused an outpouring of calls for the Minister’s resignation and for the scrapping of the recently-passed “anti-bullying” law which she cited as necessitating the prohibition.

Broten has been rebuked the Cardinal Archbishop of Toronto, and faces a petition of 5,000 and counting demanding she step down.

So we shouldn’t be surprised that she and her spokespeople are in full spin mode in their latest comments to the National Post. Alarmingly however, they are still claiming the law prohibits teaching against abortion.

Rather than simply apologizing for a gaffe and reaffirming the right of Catholic schools to teach according to their denominational beliefs as protected in the Constitution, Broten’s follow-up statement presented outright falsehoods.

Last Wednesday, Broten specifically stated that Bill 13 (the “Accepting Schools Act”) forbids teaching against abortion. That would be “misogyny,” she says.

But in her statement to the National Post on Monday sheclaims “the discussions of the last week were not about what is taught or is not taught in our Catholic schools.”

Compare that with this statement in the official transcript, oddly left out of the National Post’s article:

“We do not allow and we’re very clear with the passage of Bill 13 that Catholic teachings cannot be taught in our schools that violates human rights and which brings a lack of acceptance to participation in schools,” she said.  “Bill 13 is about tackling misogyny, taking away a woman’s right to choose could arguably be one of the most misogynistic actions that one could take.”

Click here for a full transcript of her remarks.

In addition to affirming Broten’s previous remarks, the spokeswoman demonstrates extreme ignorance of both the pro-life position and Catholic teaching on abortion.

Everyone recognizes that the slogan “a woman’s right to choose” means the ‘right’ to choose abortion – to have a physician kill the child in a woman’s womb. Since the pro-life position recognizes the right to life of all human beings, there is no possibility of approving any ‘right’ to kill a human being regardless of the age, size, or level of dependency of that person.

Moreover with regard to the Catholic faith, the Catechism of the Catholic Church is very clear that pro-life teaching necessitates taking away the so-called ‘woman’s right to choose’.

In the section on ‘abortion’ the Catechism indicates, “Human life must be respected and protected absolutely from the moment of conception.” (2270) The next paragraph notes the “moral evil of every procured abortion,” adding that abortions are “abominable crimes.”  It adds: “this teaching has not changed and remains unchangeable.”

In terms of ‘taking away a woman’s right to choose,’ the Catechism is also specific about the need for legal penalties for abortion.

In addition to leveling the most extreme Church penalty on those who commit abortion—excommunication (2272) –  the Catechism also calls for legal penalties for those who commit abortion:  “As a consequence of the respect and protection which must be ensured for the unborn child from the moment of conception, the law must provide appropriate penal sanctions for every deliberate violation of the child’s rights.” (2273)

In the end it is alarming that despite the public outcry from thousands of Canadians and the public reactions of two Ontario bishops, Minister Broten has nevertheless maintained her extreme restriction on teaching the Catholic faith on abortion in Catholic schools.

It should thus be seen as a course she intends to pursue. Her follow-up is a warning to all Catholics, Christians, and non-Christians who hold to pro-life beliefs that this government intends to restrict them – by law – from transmitting those beliefs to their children.