Trending Now
You are at:Home»Featured»“Ordinations Give Life to the Church”
By Genevieve Kineke on June 24, 2012 Featured, MyChurchParish.com, Vocations 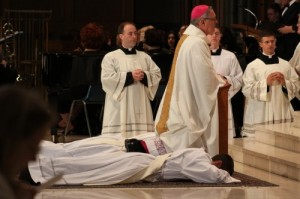 On June 23rd, the Saints Peter and Paul Cathedral of Providence, RI opened her arms to embrace three new priests, who were ordained in a marvelous ceremony that showed the Church at her finest. Bishop Thomas Tobin was supported by five fellow bishops, scores of priests, numerous joyful Religious, and delighted lay faithful—all of whom soaked in the inspiring setting: the creative floral sprays, the magnificent orchestral ensemble, the full-throated choir and a liturgy that bespoke our rich tradition.

One of the deepest paradoxes of our faith is that its simple truths motivate artists to create magnificent and often complex works, and the humility of our scourged Redeemer gives life to such triumphant illustrations of fidelity and hope. Each is meant to be a signpost of the transcendent truths that give meaning to our lives—that show us the surest path in an uncertain world. These three young men have discovered that path and heeded the Voice that called them to minister to their fellow pilgrims. For that we rejoice.

As deeply moving as the Mass of Ordination was on this fine Summer day, I couldn’t help but wonder about other ordinations that have taken place over the centuries, and in particular I wondered about the circumstances in the 16th century seminary begun at Douay, France—later shuffled about, suppressed, reopened, and shuffled some more—forming priests amidst the religious chaos of Europe. English men came to them, and were ordained and sent back in cognito to offer the sacraments to their countrymen whose Catholic faith at that time was a capital offense.

What were those ordinations like? Were there flowers and pomp? Crowds of well-wishers or lavish receptions afterwards? Probably not, but I can imagine that the prayers were intense, of the caliber that few attain without persecution to distill the thoughts. Moreover, we might include many ordinations in this light—those behind the Iron Curtain, in concentration camps and gulags, and anywhere that Christ’s words are unwelcome. Even Karol Wojtyla—who became John Paul II—knew what it was to study in secret and take Holy Orders in the quietest of settings.

As Bishop Tobin remarked concerning these young men: this is the day for which they were born. From all eternity, they were chosen to be configured to Christ, so that they might strengthen the flock and guide them safely. Young Fr. Wojtyla had his challenges, and these men will have theirs. The world is no different, only the trials have taken new shape. These men embark on their mission in a time as trying as any, with political and cultural complexities threatening the flock using deft new slogans that mask ancient and exhausted lies.

And thus we return to the simple truth. There is a God, we are his, and his Son came to claim us. From the outset, the divine plan of redemption includes a Church that would nourish, inspire, and exhort—giving witness all the while by her fidelity. In a homily just days prior, our assistant bishop commemorated the deaths of John Fisher and Thomas More who gave their lives for this simple truth. He stressed that they didn’t die only for God, but in defense of the very Church instituted to continue his presence among us.

The Church for which they died was resplendent this beautiful day, and will remain so whether decked in splendor or hidden in catacombs. Our love casts diadems about her regal neck, but our faith in Christ would honor her wherever she is found. Pray for these young men, for priests everywhere, and for ample vocations in the coming years.

Mary, Mother of Priests is a wonderful apostolate through which women can support the priesthood.