Trending Now
You are at:Home»Featured»Orphan’s New Year’s Resolution: Build a House for Other Orphans
By Patti Maguire Armstrong on January 2, 2013 Featured, Parenting, Those in Need

Calvin (far right) with his brothers, Rogers and Joash

Imagine a Kenyan AIDS orphan living in a mud hut with his two brothers and walking several miles to school on an empty stomach. After the devastating loss of both of his parents, facing daily grinding poverty, would he have any energy left to dream of a better future?  This boy is not imaginary; his name is Calvin and I know him well because during his adolescence, he read a novel about a Kenyan boy who went to school in the United States. Even though the story was fiction, it planted a dream in Calvin. It seemed an impossible dream for a boy with only two pants to his name and suffering from malnutrition, but faith is a wonderful thing.  Calvin prayed that one day he would go to school in the United States.  When his brother and aunt laughed and suggested praying for something more realistic, Calvin was undaunted. 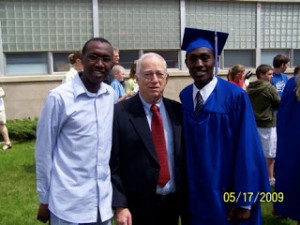 Never mind that he had never met an American and had no money, God could do anything, could he not?  Our family friend Evan Beauchamp became a missionary with our Bismarck, ND diocesan Kenyan mission, a charitable cause begun in 1992. He came to teach English at the school Calvin attended. Calvin brightened; could this be his chance?  He asked Evan to take him back to the U.S. with him, but Evan was 68, too old for such a commitment. Besides, Evan stayed in Kenya for another 9 years. (He passed away from cancer in 2011 at the age of 78.) 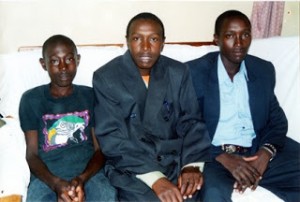 Joash, Calvin, Rogers in Kenya before Calvin came to the US

After much pleading and prayers, Evan agreed to ask his friends in Bismarck. To make a long story short, after many seemingly insurmountable odds were overcome, Calvin joined our family, nine years ago. Two other families helped make that possible by helping with his support. His younger brother Joash joined us two years later. Joash now attends a university on a full athletic (track) scholarship.

Calvin had another dream. He wanted to become a doctor and return to Kenya to help the poor. Initially, it seemed so impossible and even arrogant to tell people of this hope. But he prayed. This month, Calvin completed the basic sciences part of medical school. He is visiting his older brother and family in Kenya before beginning an internship in the United States in February.  While there, another dream was born in Calvin’s heart: to build a house for some abandoned AIDS orphans. Here is an excerpt from Calvin’s Christmas email, which explains everything.

As we approach the end of another wonderful year and celebrate the birth of our Lord Jesus Christ, I would like to take this opportunity to thank you all for all the prayers and support you gave me this year.

I am in Kenya visiting family and renewing my visa to enable me to start my clinical rotations in the US in February.  Initially I was going to do clinical rotation in Aga Khan Hospital in Nairobi, one of the best hospitals in Africa. However, the school refused to allow me to do that rotation because I had not had any clinical rotations yet.  So, last week I started volunteering at an AIDS clinic in Oyugis (a town 15 KM from my home).  It is very sad working with this patient population.  Most of them are younger than 25.  There are a lot of kids who contracted this deadly disease from their mothers, and due to their mother’s ignorance, they did not receive medication (Nevirapine) early enough to help decrease the chances of them seroconverting.  The brighter side of this whole situation is the fact that most of these patients have a positive attitude.  Unlike back in the day when my parents had AIDS, the treatment of AIDS is now readily available.

A few days ago I met 2 orphans near our house in Raganga.  Their story is pretty similar to my family’s. The parents passed away from AIDS, the relatives promised to take care of them but after a little while, they kicked them out.  The oldest sibling recently dropped out of school in 7th grade and left home to go herd cattle to make money to support his little siblings.  The two younger ones, (5th and 3rd grade)  that I met are still living at home, getting some help from grandparents and also depending on other people to help them with food, clothing, etc.. Rogers [Calvin’s older brother] has also been doing what he can to help. They are not within the region where the Bismarck Diocese operates and thus do not receive help from them.  The house they are living in should, in fact, not be considered a house.  The roof is leaky, thus letting water in the house.  This is a big problem in this region of Kisii, where we receive a lot of rain.  As far as school is concerned, they are attending a public school that I did attend for a year after my parents passed.  My brother Joash did most of his primary schooling there.  I can attribute most of the struggles that Joash had when he first moved to the US to the poor education offered at this school.

The main reason I am writing about these three orphans is that they need a chance in life.  A 7th grader dropping out of school to go herd cattle so his little siblings can go to school is not ok.  Yet, in Kenya and all over Africa, older siblings are making this decision daily.  The older sisters are choosing prostitution, and the older brothers are choosing herding cattle and gang life to make sure their little siblings have a better life.  Through your prayers and contributions, we can help just this one family.  Building a tin roofed house for them will cost $500 and tuition in a good school for an entire year is $500.  I know a $1000 is a lot of money.  But I think we should focus on the house first.

Sorry for the long email.  Have a Merry Christmas and a blessed New Year.

We all know that this family is just one of so many others that need help in Kenya, and even in our world. But I know the blessings that came from accepting Calvin and Joash into our family, and we want to continue this journey of love. God does not ask us to save the whole world, but he does ask us to do something: “The king will answer them, ‘I tell all of you with certainty, since you did it for one of the least important of these brothers of mine, you did it for me.’ “ (Matthew 25:40). 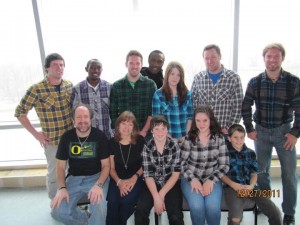 Our family. Tyler, far left, and Luke, far right, will be going to Kenya next month.

Two of my other sons will be vising Calvin in Kenya for the first time in January.  They have caught Calvin’s dream and want to help their beloved brother build a house for this family of AIDs orphans who remind Calvin so much of the plight he and his own brothers were in not many years ago.

Listen Live: To hear Calvin, Luke, Tyler, and Joash talk about the project, their upcoming trip to Kenya, and general family fun, tune in to  KFYR Radio, Friday, Dec. 28 from 3-4 Central time  at www.KFYR.com for live streaming.   It can be heard worldwide on the I-Heart App and downloaded for all smartphones.

Can you help my three boys with their New Year’s resolution?  It would only cost $500 to build a home, but in Kisii, Kenya, that is a veritable fortune. Then, there is the second goal of another $500 for school tuition.

If you want to help get the house built and enroll those kids in school, we welcome your donations, however small. Calvin is asking for the school to grant one scholarship while he works at raising money for the other one. Any amount will be gratefully accepted. If we should have the happy situation of more than needed, it will all go for the care of AIDS orphans through the Bismarck Diocesan Mission.

Please send your tax-deductible donations to: Bismarck African Mission; 520 North Washington Street; Bismarck, ND 58502-1137 or donate securely online at the diocesan website (click general donation where it asks for parish info). ***Be sure to include a note with your mailed donations, or use the comment box online to specify that the donation is for the AIDS Orphan House Project.***

Donors and Catholic Lane readers who would like to be updated on the progress of this project should send an email to pattiarmstrong(at)mac(dot)com with the subject line “AIDS Orphan House”. I will personally let you know when updates about this project, with new photos, are posted.

Thank you and Happy New Year to you and your family.