Rich Donnelly has a baseball story that is out of this world. 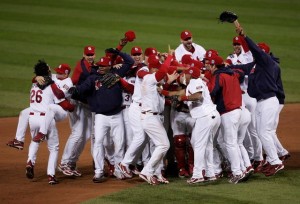 Donnelly’s daughter Amy had passed away four years before his trip to the World Series in 1997 with the Florida Marlins, but her presence was felt keenly at the end of the seventh game. The coach has recounted the story to thousands of people around the country every year.

His story has a special impact on other parents whose children are struggling with terminal illnesses or have already died. Because only they can know what it’s like to lose a child, Donnelly says he has a soft spot in his heart for such families.

It was family that brought Donnelly back from his own wayward path earlier in his career. The loving example of his wife and the early death of his daughter persuaded him to become more committed to his Catholic faith.

The 65-year-old Ohio native, who is manager of the minor league Brooklyn Cyclones of the New York Mets organization, took time out after a game in the middle of August to talk with Register correspondent Trent Beattie about his career, family and faith.

What are some of your career highlights that stand out?

Anytime you get to put on a uniform and hit the field is a highlight, but signing my first professional contract in 1968 with the Minnesota Twins was a specific one for me. Then, in four years of minor-league ball, we won four league championships. I retired myself at the ripe old age of 25 to become a coach, and I’ve been doing that ever since.

I’ve been able to coach in the major leagues for 25 years. I served as third-base coach for manager Jim Leyland on three different teams: the Pittsburgh Pirates, the Florida Marlins and the Colorado Rockies.

In our years at Pittsburgh, we won three pennants, and then at Florida we won the World Series in 1997. That was great. I remember as a boy watching the Brooklyn Dodgers and New York Yankees playing in the World Series, and then going out in the backyard, thinking that maybe one day I would do that.

What do you remember about the 1997 World Series against the Cleveland Indians?

What’s interesting is that the games themselves I didn’t see differently than any other series of games. You just go out and play as you normally would. It was only after we won that I really noticed the big difference with all the hoopla that surrounds it.

The main thing I remember about the 1997 World Series is the story regarding my daughter, Amy. She had seen me at a game in the early 1990s talking to players when they were on third base. I would cover my mouth so the opposing team couldn’t read my lips. After the game, Amy asked me, “Dad, what do you say to the players when they’re on third base? ‘The chicken runs at midnight’ or something like that?”

It was just a silly thing, but it became a catchphrase for our family after Amy was diagnosed with brain cancer. In many tough months of treatment, it was something we said to each other as a family in order to lighten things up a bit. Amy ended up passing away in 1993 at the age of 17, but the story didn’t end there.

In 1997, Craig Counsell was on our Florida Marlins team that won the World Series. My sons Tim and Mike had nicknamed him “Chicken Wing” because of his unusual batting stance, in which one of his arms would flop around. Well, I was at my post at third base during Game 7 of the World Series. It was a long game, going into extra innings. In the 11th inning, Edgar Renteria hit a single, and I waved Counsell (“Chicken Wing”) into home.

My sons had been batboys for the game, and, after we won, they ran up to me to celebrate. Tim pointed to the clock, which read “12:00.” It was exactly midnight, and Tim said, “Look, Dad, the chicken runs at midnight.”

I think it was Amy talking to us from heaven. It was the highlight of my professional career, but, more importantly, it was a faith-and-family highlight, reminding me of eternity. The things of this world, no matter how flashy, will all pass away. What matters is where we spend eternity.

That’s something it took you a while to learn, right?

When I was younger, I actually did have that type of focus, but lost it later in life. The happiest time of my life was when I was a kid. I was a daily communicant, and my faith was my whole life. In high school, I was probably one of the last people to actually build a May altar in my bedroom.

Then, after I left home and my career progressed, the values of the world gradually got a hold of me. I’m ashamed to say it now, but in my 30s, I became embarrassed to be known as a Catholic. I wanted to be seen as a tough guy, a winner, a great baseball man. I was full of myself, very egotistical, and that kind of attitude only leads to misery.

I’ve known many millionaires in my life, even some billionaires, and they’re always looking for something else. There’s no contentment — just that restlessness St. Augustine refers to in his well-known prayer: “Our hearts are restless, O Lord, until they rest in thee.”

Let me tell you: Nothing in the world can make you happy like Jesus Christ can. Nothing. It took me a while to relearn that.

I would lie in bed at night wondering why I was so miserable and finally asked the Lord what was wrong with my situation. What came back to me was the thought of the happiest time of my life — my youth. I would serve at the altar, on the doorstep of heaven, and was just filled with the Lord. I wasn’t rich or famous, but I was content. That realization, along with the loving example of my wife, Roberta, helped to bring me back to participating more fully in the Church.

Then what really capped it off was Amy’s death. Nothing will get you to turn your life around like the death of a loved one. It really makes you think of your own weakness and need for God’s grace and mercy. We’re all going to die one day, but we don’t like to think of that. We’d better think of it, though, if we truly want what’s good for us. At the point of death, what a consolation it will be for devout Christians to have lived according to the teachings of Jesus Christ.

How does your family play in your overall view of life?

I have eight kids and seven grandkids so far, and we’re very religious. We do things together as a family, and I enjoy being around them a lot. My wife is a great example of someone who really lives the faith. Of course, it’s necessary to pray and go to Mass and confession, but we also have to take the grace we obtain and use it in our interactions with others.

That’s what we learn in the parable of the talents: You’ve got to invest what you’ve been given. My wife does just this, treating people respectfully, giving of herself, and putting herself last. Then, after death, the last shall be first, right?

Mother Teresa would sometimes give speeches, and what made them so powerful was her own life. She didn’t just go up there and tell people what to do in words; she had already given her own example in deeds. That’s why something she said would get a greater response than the same thing coming from someone else. That’s the power the saints have, which comes from their inner conversion and living the faith from the inside out.

Do you have a favorite saint?

As a kid I looked up to my older brother Romey, who played in the Cincinnati Reds organization. I admired him a lot; he was my mentor and tutor, and I wanted to be just like him. Unfortunately, he was diagnosed with Hodgkin’s disease, so I prayed a novena to St. Jude, the patron of hopeless cases, for his cure. I was 14 at the time, and my brother was 28, the age at which he died. Even though my request wasn’t granted, I still continue to have a devotion to St. Jude.

You know, I was an impossible case with my bad attitude mentioned earlier, and I did get out of that situation.

How does your faith affect your coaching?

Coaching is like being a father. There’s a time to kid around, a time to discipline, and a time to realize that you and your player (or your child) just don’t see things the same way. What’s most important is to be honest and fair. The worst thing in the world is for your players or your children to lose trust in you, so you have to be upfront with them.

What you see with children or players or anyone else is that the good ones are always disciplined. They know their limits, are respectful of others, and they contribute to the family, team or group they’re in. Those are some things to look for and encourage.

I love to study people, so one of the things I’ve done in coaching is to study other coaches. I remember years ago reading about Miami Dolphins coach Don Shula, whom my father admired, not for his football accomplishments, but because he would go to Mass every day.

I also encountered Catholic coaches in my own career, like Jack McKeon of the Florida Marlins, and looked into what they do that works, and then take that into my own coaching.

There are also people like [former NFL player and coach]Danny Abramowicz, whom I’ve known since childhood back in Ohio. We’ve had similar stories, in that we grew up very devout and happy, then went wayward following our success in sports, but we finally got back on course.

Baseball is so similar to life in general. There’s a base-running analogy that matches up quite well. You start out at home, get a little older (first base), then in early adulthood (second base), you’re the furthest away from home you’ll ever be. (Second base is 120 feet and six inches from home plate.) You get a little older and wiser (third base), and you see home plate. Then you realize that where you want to be is where you already were.

In my case, when I rounded second base, I fell off the base path altogether and went off into left field, but did eventually get back on the right path. Contrary to what some people think, you can go home again.