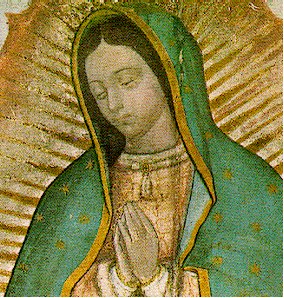 Mesoamerica, the New World, 1521: The capital city of the Aztec empire falls under the Spanish forces. Less than 20 years later, 9 million of the inhabitants of the land, who professed for centuries a polytheistic and human sacrificing religion, have converted to Christianity. What happened during the interval that produced such an incredible and historically unprecedented conversion?

In 1531 a “Lady from Heaven” appeared to a humble Native American at Tepeyac, a hill northwest of what is now Mexico City.  She identified herself as the ever virgin Holy Mary, Mother of the True God for whom we live, of the Creator of all things, Lord of heaven and the earth.

She made a request for a church to be built on the site, and submitted her wish to the local Bishop. When the Bishop hesitated, and requested a sign, the Mother of God responded without delay or question, and sent her native messenger to the top of the hill in mid-December to gather an assortment of roses to show the Bishop.

Also, our Lady left for us an image of herself imprinted miraculously on the native’s tilma, a poor quality cactus-cloth, which should have deteriorated in 20 years but shows no sign of decay 479 years later; it still defies all scientific explanations.  Apparently there is even discernible a reflection in Her eyes of the scene and the people in front of her when the roses spilled out of the tilma.

Her message of love and compassion, and her universal promise of help and protection to all mankind, as well as the story of the apparitions, are described in the “Nican Mopohua,” a 16th century document written in the native Nahuatl language.  There is reason to believe that at Tepeyac Mary came in her glorified body, and her actual physical hands rearranged the roses in Juan Diego’s tilma, which makes this apparition very special.

An incredible list of miracles, cures and interventions are attributed to Her. Yearly, between 18 – 20 million pilgrims visit the Basilica, making it Christianity’s most visited sanctuary.

Altogether 25 popes have officially honored Our Lady of Guadalupe. St. John Paul II visited her Sanctuary four times: on his first apostolic trip outside Rome as Pope in 1979, and again in 1990, 1999 and 2002.

During the same visit Pope John Paul entrusted the cause of life to her loving protection, and placed under her motherly care the innocent lives of children, especially those who are in danger of not being born.