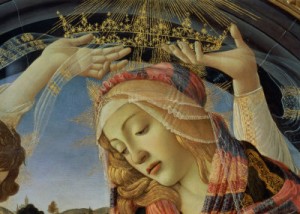 With the entire Mediterranean at the mercy of Ottoman fleets, Muslim slave-traders had been ravaging coastal towns in 16th century Europe, and carrying whole villages to the slave markets.  Pope Pius V helped organize a coalition of Christian fleets, notably Spanish, Venetian and that of the Papal States.  The Pope asked the Churches of Catholic Europe to solicit the interposition of Divine Providence by praying the rosary, and that our Lady might intercede on behalf of the Christian navy.

On Oct 7, 1571 a great sea battle took place off the West coast of Greece, at Lepanto.  Though outnumbered, the Christian fleet under the command of Admiral Don John of Austria inflicted a decisive defeat on the Ottoman Empire.  The Turks lost 80 ships sunk and 130 captured by the Allies, and 30,000 men killed (not including 12,000 Christian galley slaves who were freed) while allied losses were 7,500 men and 17 galleys.

In gratitude Pope Pius declared Oct. 7 to be the feast of Our Lady of the Rosary, which it remains today.

REFLECTION:  By the grace of God all things are possible.  Pray that our Lady may help us in the culture wars of today, and that the Gospel may be restored once again to its rightful place of preeminence in society.