Trending Now
You are at:Home»Featured»Our Lady’s Three Rosaries
By Fr. Edward Looney on May 13, 2015 Featured, Live in Christ, MyChurchParish.com 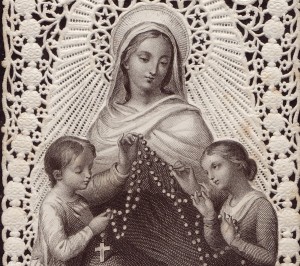 In her apparitions to the shepherd children at Fatima, Mary revealed herself as the Queen of the Holy Rosary and encouraged the daily recitation of the rosary. This devotion to the Mother of God has been recommended to the faithful for centuries.

In fact, when one is attached to habitual sin, oftentimes in the confessional the sinner will be encouraged to develop a devotion to Mary. It was St. Bernard who once in his homily In Praise of the Virgin Mother said that in the midst of trial or temptation, one should look up to Mary. Fr. Donald Calloway, MIC, in his latest book, Under the Mantle, states when a person undergoes temptation, it typically lasts 15 minutes. The same amount of time it takes to pray the rosary.

The rosary in many ways is the Marian devotion par excellence. John XXIII stated as much when he said “As an exercise of Christian devotion among the faithful of the Latin Rite who constitute a noble portion of the Catholic family, the Rosary ranks after Holy Mass and the Breviary for ecclesiastics [priests], and for the laity after participation in the sacraments. It is a devout form of union with God and lifts souls to a high supernatural plane.” The rosary has been the beloved Marian prayer for centuries and has received the endorsement of the Magisterium through many papal writings.

In his twelve rosary encyclicals, Leo XIII exhorted the Catholic faithful throughout the world to observe October as a month dedicated to Mary through the rosary. He acknowledged that the rosary had, in the past, defeated heresy, and at that time more than ever, they needed to implore the intercession of Mary.

In Rosarium Virginis Mariae, Pope John Paul II reiterates the rosary as a school of prayer and contemplation in addition to being a way to obtain peace in the world. In Fatima, Our Lady said that the rosary would obtain world peace. Suffice it to say, the rosary is a powerful prayer that can avert wars and establish lasting peace.

In speaking of the rosary devotion, it is necessary to acknowledge that there are three prominent rosary devotions. They include: the Dominican rosary (the most popular), the Servite Rosary, and the Seraphic Rosary. Let’s briefly look at each.

The most common form of the rosary is the Dominican Rosary, known for its three sets of mysteries, the Joyful, Sorrowful, and Glorious mysteries. In Rosarium Virginis Mariae, John Paul II added a fourth set of mysteries, the Luminous Mysteries or Mysteries of Light, which focus on the public ministry of Jesus.

One of the reasons for the rosary was illiteracy. Priests and religious were required to pray 150 psalms over the course of a day or three days. For the laity, the rosary with its three sets of mysteries, totaling 150 Hail Marys, became an alternate to the daily recitation of the psalter.

The rosary as we know it today has been attributed to St. Dominic, but this fact has been disputed by scholars. Reportedly St. Dominic received the rosary in a vision and began to preach the devotion as a means to overcome the Albigensian heresy. St. Dominic and Blessed Alan de la Roche received specific promises for those who are devoted to the rosary.  To this day, the Dominican order promotes the Confraternity casino jameshallison of the Holy Rosary. For more information, go here or here for more information.

The Church highlights the importance of the rosary with a special feast on October 7. Formerly known as the feast of Our Lady of Victory, the October 7th commemoration celebrates the victory of the Christian people over the Moslems at the Battle of Lepanto on October 7, 1571.

The Servite Rosary, more commonly known as the Seven Sorrows (Dolours) Rosary, differs from the traditional Dominican rosary in number of mysteries and Hail Marys. The rosary consists of seven mysteries with seven Hail Marys to each mystery. The seven mysteries are:  The Prophecy of Simeon, The Flight into Egypt, The Loss of Jesus in the Temple, Mary Meets Jesus on the Way to Calvary, Mary Stands at the Foot of the Cross, Mary receives the dead body of Jesus in her arms, and Jesus is placed in the tomb.

The Seven Sorrows rosary has gained popularity in recent years because Our Lady requested its recitation on Tuesdays in her apparitions in Kibeho, Africa. Learn how to pray this rosary here.

The Franciscan Crown dates back to the year 1422. Wadding tells us that a young novice who had that year been received into the Franciscan Order had, previous to his reception, been accustomed to adorn a statue of the Blessed Virgin with a wreath of fresh and beautiful flowers as a mark of his piety and devotion. Not being able to continue this practice in the novitiate, he decided to return to the world. The Blessed Virgin appeared to him and prevented him from carrying out his purpose. She then instructed him how, by reciting daily a rosary of seven decades in honour of her seven joys, he might weave a crown that would be more pleasing to her than the material wreath of flowers he had been wont to place on her statue. From that time the practice of reciting the crown of the seven joys became general in the order.

The mysteries of the Franciscan Crown include:  The Annunciation, Visitation, Nativity, Adoration of the Magi, the Finding of Jesus in the Temple, the Resurrection, the Assumption, and the Coronation of Mary.

Many people say they have a difficult time praying the rosary because it is repetitive. The repetition of ten Hail Marys should be viewed as an opportunity to get lost in the mystery—to enter into the events of Christ’s life.

There are many recommendations to delve deeper into the rosary prayer. One example would be inserting a phrase after the word Jesus. For example, during the first mystery pray, “thy womb Jesus incarnate” “thy womb Jesus, announced by the Angel.” Doing this keeps the contemplated mystery at the forefront.

Whether one prays the Dominican, Servite, or Seraphic rosary, what remains the same is that these rosaries are based on scripture and invite the devotee to meditation on the mysteries of Christ. The rosary has been a favorite prayer of many for centuries.

There are countless stories describing the power of the rosary. St. Louis de Montfort in The Secret of the Rosary provides one such example. King Alphonsus, King of Leon and Galicia declared, “Blessed be the rosary of the Most Blessed Virgin Mary by which I have been delivered from eternal damnation” (29).

Consider heeding Our Lady’s request at Fatima, to pray the rosary daily. When you start to pray the rosary every day, you will notice a considerable difference in your life—peace, love, and joy will abound through Mary’s mediation.

St. Louis de Montfort, The Secret of the Rosary