Trending Now
You are at:Home»Featured»Overreaching in Plain English
By Tom Purcell on March 5, 2015 Featured, Humor 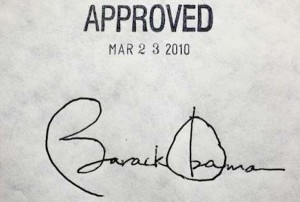 Get this: The federal government is trying to explain things to citizens in plain English.

In 2010, you see, President Obama signed the Plain Writing Act into law. It requires that all federal agencies use “clear government communication that the public can understand and use.”

In 2011, Obama took the plain-language initiative a step further. He issued an executive order (No. 13563) that demands that government “regulations are accessible, consistent, written in plain language, and easy to understand.”

Too bad these actions came after ObamaCare, which Nancy Pelosi said Congress had to pass so we could find out what was in it.

Of course, bills written by lobbyists, who are paying off members of Congress to make laws that enrich them, are poorly written on purpose. Don’t ask me — ask ObamaCare consultant Jonathan Gruber.

“This bill was written in a tortured way to make sure (the Congressional Budget Office) did not score the mandate as taxes,” said Gruber. “If CBO scored the mandate as taxes, the bill dies. … Lack of transparency is a huge political advantage. And basically, you know, call it the stupidity of the American voter or whatever, but basically that was really, really critical to get the thing to pass.”

These are the most powerful people in Washington, D.C. They work in more than 50 different regulatory agencies and each is empowered to create and enforce rules and regulations that are backed by the might of federal law. Individuals and organizations can be fined or thrown in jail for violating them.

Being somewhat fearful of being fined or thrown in jail, I prefer that we have fewer rules, not more of them. Consider the complex rules and regulations that pertain to the IRS. The IRS itself doesn’t understand half of them. Call two different agents with a tax question and you’ll likely get two different answers!

The Heritage Foundation says a major federal regulation is defined as “any rule that the Administrator of the Office of Information and Regulatory Affairs of the Office of Management and Budget finds has resulted in or is likely to result in: (A) an annual effect on the economy of $100,000,000 or more; (B) a major increase in costs or prices for consumers, individual industries, Federal, State, or local government agencies, or geographic regions; or (C) significant adverse effects on competition, employment, investment, productivity, innovation, or on the ability of the United States-based enterprises to compete with foreign-based enterprises in domestic and export markets.”