Trending Now
You are at:Home»Featured»Parenting Problems: What’s Wrong with Changing Thomas into “Tammy”?
By Steve Pokorny on October 29, 2011 Featured, Parenting 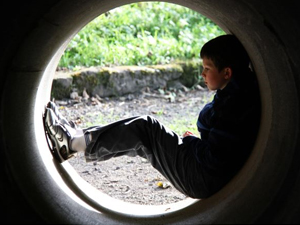 What comes to mind when you hear the word “parenting?” Perhaps being attentive, nurturing, caring, loving and wanting what’s best for a child. But what happens when parents’ good intentions go awry?

Take the case of Thomas Lobel: Thomas was adopted by same-sex couple Pauline Moreno and Debra Lobel when he was 2 years old.[1] Through sign language (because of a speech impediment), he told the couple, “I am a girl.”

According to the article, after Thomas threatened genital mutilation upon himself at age 7, psychiatrists diagnosed him with gender identity disorder. At age 8 Moreno and Lobel began allowing him to pick out his own clothes, which included headbands, bras, and dresses. This past summer, he began taking hormone-blocking drugs in order to stop experiencing the onset of puberty.

When interviewed, Moreno and Lobel said they were not forcing Thomas, now called Tammy, to do this. They plan to keep him “as a pre-pubescent boy until she decides and we feel that she can make this decision about surgery.” Their belief about treatment comes from the Youth Suicide Prevention Program, which claims that “more than 50 percent of [people who consider themselves to be]transgender commit at least one suicide attempt by their 20th birthday.” They want to prevent this from happening, as well as “help him have a less conflicted adulthood.”

Arguably, at the root of this situation is the belief that a child should be able to make his or her own choices in life. Yet is this good parenting?

As a relatively new father, I am beginning to see that certain things my daughter wants to do are probably not the best for her. She’s one now and is walking with a vengeance. She likes to visit the inside of cabinets, explore the neighborhood, climb the stairs and reach up to grab things off countertops and tables.

If I were to just sit by and let her explore, she could get into serious trouble. She might cut herself on a blade or fall out of a cupboard onto the tile floor. She might stumble into the path of a car in the street. She might pull a pot of boiling water off of the stove or drop a glass. My job as her father is not to merely watch these things happen, but to ensure a safe environment and intervene if I know that what she’s doing could cause her harm.

Any number of child development teachers will tell you that children simply do not have the same capacity to make decisions that adults do. This is even true throughout teenage years. Our brains develop and we learn from experience. Children not only need adults to guide them — they have a right to be guided in truth.

“Yeah, but you can’t limit your daughter’s freedom of expression. You can’t impose your morality on her.” Dang right, I can. For I am duty-bound by God to make sure that she grows up in a healthy and holy way. Establishing boundaries now is going to radically help her later when she has to make much more difficult choices.

In our culture, we’ve infused the term “freedom” with the idea that we can do whatever we want. Following this logic, “freedom” means that I can go into the gas station with a loaded .44 and blow away everyone there, simply because I want to do so. In reality, this isn’t freedom at all; it’s license.

We have freedom not for indifference and to choose whatever, but freedom to choose excellence, to choose what is going to help make us into the best version of ourselves. As parents, it’s our responsibility to help our sons and daughters see what the best choices are and to understand that there are consequences to their choices — some of them severe. Consequences exist not just because of arbitrary “rules” decided by society (though these types of consequences exist as well) but because there is an order to things that exists outside of our own determination. As Christians, furthermore, we are duty-bound to bring up our children according to the truth that Christ has revealed to us.

This brings us back to the case of Thomas Lobel and his adoptive “parents.” Just as we don’t choose when we are born, the color of our skin, or the language we speak in childhood, we don’t get to decide what sex we are. We are either male or female, down to the core of our spiritual AND physical being. God doesn’t make “mistakes.”

Because there has been a radical misunderstanding of the sexes since at least the 1960s, we’ve been sold the lie that differences between the sexes don’t matter. But they really do. The way in which I perceive the world is always through the lens of being a male. If I don’t understand this, or see myself as less than male, then I will have trouble living an integrated life. Many people, confused by their feelings about being male or female try to change what’s between their legs, rather then heal misunderstandings they have between their ears. Understanding the truth about sexuality — the importance of being created male and female — is crucial to our self-understanding in the world. If we don’t put this major piece of the life puzzle in the correct place, we’re going to experience major heartache.

Moreno and Lobel may think they are acting upon good intentions by trying to keep Thomas from inflicting harm upon himself, but they seem to be at a loss to help Thomas understand what it means to be male. In fact, in the way they have handled the situation so far, they seem to be confused about what exactly makes one a male or a female. This confusion is widespread in our culture — it’s the culmination of thousands of years of wrestling with the effects of the fall.

The truth is, in all of our pursuit of “equality” and “freedom of choice,” we’ve forgotten about the rights of children. A child ultimately has the right to be conceived in the loving embrace of his or her father and mother and to be nurtured and raised within the context of his biological family. To quote Pope Benedict, “Children have the right to be born and to grow in the midst of a family founded on matrimony, where the parents are the first educators of children in the faith and where they can grow to full human and spiritual maturity (Dec. 3, 2005). Now certainly, there are many cases where this is simply not possible, due to death or abandonment or any number of other factors. But we ought to strive for the next best thing even for children who are placed for adoption. I’m not going to argue whether same-sex couples should or should not adopt here, but I am going to insist that children deserve nothing less than the opportunity to be brought up in an environment that values both authentic masculinity and femininity. This should be the gold standard when it comes to parenthood.

When we neglect of our responsibilities toward children — or worse, when we force upon them some sort of social experiment in the name of “equality” — we do violence to the very children we are called to protect.

This is not to say that our children need to be trained in the equally false, culturally conditioned “boys-must-be-athletes and girls-must-be-prom-queens” stereotypes. Essentially, every girl needs examples of authentic femininity and every boy needs examples of authentic masculinity. While there are elements of truth about the sexes in society, who needs to be held up above all to our children as the chief models for healthy sexuality are Jesus and Mary. These are the two greatest examples of how we are to live out our bodies as a gift and to experience a life worth living. And unlike untouchable superstars, relationships with them are just a prayer away.

Evil is the absence of good. When God created man, male and female, he said “It is very good.” When we try to take what God has created and recreate it according to our own design, we are rejecting his gift. We are cooperating with evil. Thus, what is being inflicted upon Thomas is evil.

Our goal as parents is not to be our children’s friends, but their father or mother. Thus it is vitally important that we as parents take up our crosses and impart the true meaning of sexuality to our children, no matter how awkward those conversations may be. And this is not to be done merely in one conversation, but with the whole of our lives. We ourselves must have our understanding of masculinity and femininity purified by Christ’s love and strives to live this as a response to his grace. If we don’t know these truths and/or how to articulate them, then now is a good time to start learning (for example, our Office has fantastic Father-Son, Mother-Daughter Programs)! It is only then that we will be empowered to educate our own Thomases who aren’t comfortable in their own skin about the truth of their bodies, that they shouldn’t try to discard or mutilate themselves, but instead have their minds renewed (cf. Romans 12:2) and their hearts healed.

[1] “The little boy who started a sex change aged eight because he (and his lesbian parents) knew he always wanted to be a girl,” September 30, 2011 http://www.dailymail.co.uk/news/article-2043345/The-California-boy-11-undergoing-hormone-blocking-treatment.html#ixzz1a1Jt0Y7j