Trending Now
You are at:Home»Columnists»Parenting Teens: Where to Draw the Line
By Marybeth Hicks on March 15, 2013 Columnists, Featured, Parenting, The Catholic Family 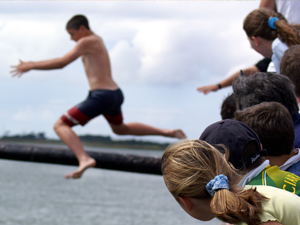 Mom-blogger Ursula Hennessey, writing last week at OnTheCulture.com, questioned the lax supervision provided by too many parents of teens. A recent story in her local paper recapped an alarming incident in which nine high school students were found in one of the teen’s garage, drinking beer and setting up for an evening of drinking games.

They were caught thanks to neighbors who complained about the loud music emanating from the property. Here’s the kicker: The homeowners (read: parents) were inside their house, just across the driveway.

“What gives?” Mrs. Hennessey wonders. “How is it possible for parents to be so clueless about their children’s behavior?”

“I need help! I admit it! All I could think was, ‘How can these parents be so dumb?’” Mrs. Hennessey wrote. “Set me straight, Marybeth.”

To make things even more interesting, Mrs. Hennessey included a “bonus” question for this advice column:

Let’s say it was your 16-year-old daughter who was escorted home by the police after getting busted at her friend’s house taking part in an underage drinking party. In the coming weeks, your daughter asks to go over to that boy’s house again: “We won’t do anything stupid again, Mom, I promise.” Would you let her go? Would you call the parents and confront them about their lax supervision? Would you (as I probably would, the chicken that I am) simply avoid this family and keep coming up with excuses for your daughter never to be around them again? Shape up my parenting, Marybeth. Give me something to go on when this happens to our family.

First off, I predict you’ll never confront this sort of situation because your eldest child is only 8 years old and you’re already working hard to avoid it. As I’ve said in the past, good parenting is no guarantee that great children won’t make dopey decisions, but it’s a reasonable hedge against a home visit from the police.

It just so happens that last night I had a conversation with my youngest, a 15-year-old sophomore, about my reticence regarding house parties, and by reticence I mean my hell-bent objection to them in most cases. Why? Because as my sage, my 83-year-old dad, said when I was a teen, “Nothing good happens at a house party.”

The story from your hometown paper is a great example of that, but also of need to apply the parenting axiom “Always be suspicious of teenagers.” Parents such as those in the story whose sense of responsibility is so nominal, or whose capacity to be hoodwinked by teens is so incredible, are not your best allies in the fight against stupid mistakes. The fact that they weren’t as bothered as their neighbors by the loud music indicates they are either too lazy to trek across the driveway or, worse, they’re attempting to be the “cool parents” who look the other way.

Back to your dilemma. The short answer to your scenario is: none of the above.

If my daughter ever were in a situation that included free transportation from law enforcement, I would wrap the host family’s home in a figurative roll of evidence tape and call it off limits. It is, after all, a crime scene.

Confronting other parents is always a dicey option. In circumstances like these, you’d hope that the parents would reach out to you and apologize that such behavior took place at their home. That’s pretty old school, though, and doesn’t happen much these days.

So yes, avoidance is smart, but this situation also would call for a strong and consistent response on your part to the one person who matters most: your daughter.

Behaviors have consequences, after all, and the erosion of parental responsibility takes time to repair. It can be rebuilt, but only with a Reagan-esque strategy: trust but verify. A teen who trips up must have chances to demonstrate that she has learned her lesson, but that means accepting a level of parental supervision that permits ease of mind for Mom and Dad.