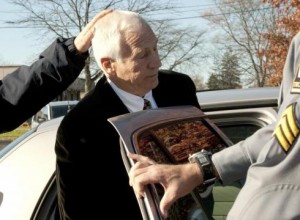 Coach Jerry Sandusky, the now notorious pedophile, and his boss, coach Joe Paterno, have some Catholic background.  Paterno played football for a Catholic high school in New York.  The New York Times states that Paterno is a “practicing Catholic.”  The most I could ascertain about Sandusky is that his paternal grandparents emigrated from Poland.

To what extent either of these men were faithful to Catholic faith and morals is unclear.  On the day after Paterno was fired, I was unable to get more insight into their Catholic character despite calling both parishes in State College PA, as well as the Penn State Catholic Campus Ministry.  None of the three were answering their phones during business hours.  I’m guessing they were hunkered down in a state of shock.  At the diocesan level the family life director of the diocese, Mrs. Susan Stith, gave me the standard bureaucratic answer, “I’m sorry but I’m not authorized to give out any information.”  I’m afraid I lost my temper on the telephone and called Susan a coward.  Mea Culpa.

Most of the attention in the media in this latest sexual crisis has been on sins of commission by Sandusky, and on Paterno’s failure to report transgressions against minors to the government.  Speaking of the government, I’m tempted to go into the complicity of the U.S. government itself, especially the Federal Courts, in constructing the moral cesspool in which our country currently wallows.  Instead let me focus here on Catholics and their particular sins of omission – not the well known sins of commission.

Scripture tells us to fight the good fight with the wisdom of a serpent.  Instead we have gone tiptoeing around the militant homosexuality movement, confusing timidity with the virtue of being guileless as doves.

At last, hopefully, things are changing.  Much to the chagrin and outrage of influential people in the so-called advanced nations (like the French Foreign Ministry), the Vatican’s Secretary of State, Cardinal Tarcisio Bertone, decided last year to call a spade a spade, or rather to identify abusers of adolescent boys as homosexuals – a common sense association unmentionable in polite society.*

So much for polite society.  As Admiral David Farragut put it at Mobile Bay, “damn the torpedoes, full speed ahead.”  Bertone’s is exactly the correct contradiction to infiltration, especially infiltrators into the priesthood or into coaching or into anyplace where children are particularly vulnerable.  The Boy Scouts have got it right in standing firm against homosexual den masters.

Webster’s unabridged dictionary defines the word, infiltrate, as follows:  “To move into an organization… surreptitiously and gradually, esp. with hostile intent.”  Surely we have the right and duty to defend the high ground in the adolescent and college age subcultures against the entry of practicing sodomites.  Relevant here is St. Paul’s admonition (1 Corinthians 5:13), “expel the evil man from your midst.”

St. Paul had no qualms about calling out seducers who infiltrate households, to “capture silly women” (2 Timothy 3:6).  Or as Matthew 23:14 quotes Jesus, “Woe to you, scribes and Pharisees, hypocrites!  For you devour widows’ houses, and for a pretense you make long prayers.”

The influx of practicing homosexuals into positions of authority should be of particular concern to any Catholic.  The scandals have made us objects of ridicule.  The joke now making the rounds is, “I didn’t know that Penn State was a Catholic school.”

Since the scandals broke a few years ago, Catholic Bishops, including the Bishop of Rome, are reviled for being too slow in defrocking pedophiles after the fact.  But the critics of the Catholic Church say little about our guarding the gates with vigilance beforehand.  Much as the Boy Scouts prevent homosexual rakes from infiltrating their ranks, so Pope Benedict has, to his credit, demanded that men with homosexual proclivities be excluded from seminaries.  Even the candidates who claim to be celibate represent a danger if they have disordered sexual inclinations.  God bless the Holy Father for his prudence and firmness.

By far the guiltiest of committing abominations against adults and children are the infiltrators themselves.  To them the principal blame is due.  Humanly speaking, they are the chief culprits.  And yet whenever the Church applies just discrimination against practicing homosexuals (in adoptions, for example), it gets labeled “bigotry.”

Cultural commissars in the West urge citizens to worship at the altar of a much-touted triune ethic – tolerance, diversity and choice. This secular trinity militates against the influence of righteous indignation.  It demands that people who express disgust at sexual sins be reprogrammed.  Teach them to reconsider their negative attitudes.  Show them that a tendency to look down on homosexual sex is wrong in itself.  Brow beat them with the notion that such a critical attitude is condescending and judgmental.

Of those who would thus revamp our spiritual instincts, the Sermon on the Mount warns: “Beware of false prophets, who come to you in sheep’s clothing, but inwardly are ravenous wolves” (Matthew 7:15).   In the spirit of St. Paul (Titus 2:15), let us “speak, exhort and rebuke with all authority.”

The late Bishop of the airwaves, Fulton J. Sheen, was no devotee of today’s postmodern shibboleths. On the contrary, in a prophetic essay 80 years ago, Sheen wrote:

America, it is said, is suffering from intolerance – it is not. It is suffering from tolerance…. Our country is not nearly so overrun with the bigoted as it is overrun with the broadminded…. Tolerance is an attitude of reasoned patience toward evil…, a forbearance that restrains us from showing anger or inflicting punishment…. Architects are as intolerant about sand as foundations for skyscrapers as doctors are intolerant about germs in the laboratory. Tolerance does not apply to truth or principles. About these things we must be intolerant, and for this kind of intolerance, so much needed to rouse us from sentimental gush, I make a plea. Intolerance of this kind is the foundation of all stability.**

Let cowardice cease.  Down with the prevailing idolatry about inclusiveness.  We need, rather, to exhibit the militancy and intolerance that Jesus modeled when he cleansed the temple.

____
* In 2004 the Catholic League reported the following re priestly abuse: “Almost all the priests who abuse children are homosexuals. Dr. Thomas Plante, a psychologist at Santa Clara University, found that “80 to 90% of all priests who in fact abuse minors have sexually engaged with adolescent boys, not prepubescent children.

According to the Boston Globe, “Of the clergy sex abuse cases referred to prosecutors in Eastern Massachusetts, more than 90 percent involve male victims. And the most prominent Boston lawyers for alleged victims of clergy sexual abuse have said that about 95 percent of their clients are male.

“In a database analysis of reports on more than 1,200 alleged victims of priests identified by USA Today, 85 percent were males. In another study by USA Today, it was determined that of the 234 priests who have been accused of sexual abuse of a minor while serving in the nation’s 10 largest dioceses and archdioceses, 91 percent of their victims were males.”