Trending Now
You are at:Home»Featured»Peace Be With You
By Stu Walker on May 10, 2011 Featured, Live in Christ 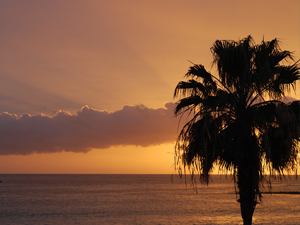 In last Sunday’s Gospel we were told that the disciples had locked themselves in a room for fear of retaliation by the Jews. “Jesus came and stood in their midst and said to them, ‘Peace be with you.'”

We are familiar with the story of Thomas and how he doubted his friends, so I do not wish to address that issue this week, except to say, Thomas doubted the report of the disciples.

I find no fault with Thomas doubting the words of his friends. He was not in the room when Jesus appeared, so we are not privileged to how he would have reacted if he had been at the first visit. We do know how he reacted at the second visit, he fell on his knees and said, “My Lord, and my God.” This seems to give a pretty good explanation of how he would have reacted originally.

Sunday, May 1, 2011 will be remembered in history as a very special day. No, not because of Thomas, but for three other reasons.

One, It was Divine Mercy Sunday. As Christians, we are told to go to all nations and spread the Good News of Jesus Christ; his death and resurrection. At his death on Golgotha, Matthew records that the curtain in the Temple that partitioned the Holy of Holies from the rest of the congregation was torn, from top to bottom. It was the symbol of where Almighty God presided, much as the Tabernacle is the symbol of where Christ, in the presence of the Holy Eucharist presides on the Altars of Catholic Churches around the world.

It is fitting that the Beatification of John Paul II would be celebrated on Divine Mercy Sunday as Catholics around the world convened in their parishes to celebrate the two events. Beatification is the step before the actual proclamation of a person as a saint.

Another man died that same day. He died a sudden, bloody, and violent death.  In the Garden of Gethsemane, as we recalled in the Passion narratives, Peter gallantly tried to defend Jesus against his eventual death. Jesus admonished him, “Put your sword back into its sheath, for all who take the sword will perish by the sword. Do you think that I cannot call upon my Father and he will not provide me at this moment with more than twelve legions of angels? But then how would the scriptures be fulfilled which say that it must come to pass in this way?” (Matthew 26:52-54).

Someone has once said, “Life is choices.” I do not remember in my lifetime a more profound image between good and evil. It is as if the words Jesus spoke to Peter were written in the year 2011, that is the beautiful thing about Truth, it is timeless.

One man, Pope John Paul II, chose to serve God and his fellow man by becoming a Catholic Priest and eventually was chosen as the Church’s leader, The Pope. He gave his life, his service, and his energy to proclaiming the message of peace, love, and mercy of God through the death and resurrection of his beloved Son, Our Lord, Jesus Christ. One of the shining moments in his Papacy was his obedience to the command of Jesus to Sister Faustina to designate a Feast celebrating the Divine Mercy of Our Lord, Jesus Christ.

Osama Bin Laden chose to use his material wealth to organize and finance a group of men and woman who would kill, maim, and disrupt the lives of other people around the world. He claims to have spoken for Allah. He chose to go on television to proclaim that Allah had been glorified when four planes flew into the Twin Towers, the Pentagon, and attempted to assassinate the President of the United States of America by trying to fly into the White House. That part of his attempt was thwarted by four brave men who disrupted his plan of terror.

What is God’s part? He has already declared his wishes by his Word, His deed, and His Son. Remember and peace be with you.