Trending Now
You are at:Home»Featured»Pelosi Blasts Catholics on Abortion: They ‘Have This Conscience Thing’
By Kathleen Gilbert on November 23, 2011 Featured, Government & Politics, Life Issues & Bioethics 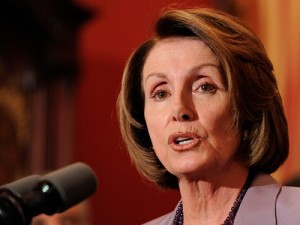 Former Speaker of the House Nancy Pelosi blasted Catholics for fighting for the right not to perform or fund abortions, describing their abhorrence for supporting abortions as “this conscience thing,” in remarks to the Washington Post.

Last month, during a debate in the House over a bill to stop abortion funding in the health care bill and to strengthen conscience rights on abortion, Pelosi had described the bill as “savage,” claiming that it would allow doctors to let women “die on the floor” because they could refuse to perform an abortion.

In her remarks to the Post, Pelosi, who says she is Catholic, defended her statements against the Protect Life Act. While some “may not like the language,’’ she said, “the truth is what I said.”

“They would” let women die on the floor, she said. “They would! Again, whatever their intention is, this is the effect.’’

“I’m a devout Catholic and I honor my faith and love it … but they have this conscience thing [about abortion],” added Pelosi.

Conservatives have been fighting to correct the health care overhaul’s propensity towards forcing taxpayers to fund abortion and contraception, an aspect of the legislation that has become increasingly clear since its passage in March of last year.

In particular, U.S. bishops and other pro-life leaders are vigorously opposing a new rule from the U.S. Department of Health and Human Services this summer that would force all employers to cover birth control, including abortifacient drugs, as “preventive care.” The only conscientious exemption in the rule is granted to religious employers who both employ and serve only members of their own sect, leaving out virtually all religious ministries.

The narrow exemption has been strongly supported by pro-abortion groups, such as National Partnership for Women & Families, who urged supporters to tell HHS Secretary Sebelius to “stand strong against anti-choice extremists” supporting a broader exemption.

At a speech in Norfolk on Saturday, Sebelius, a Catholic who as Kansas governor was a strong abortion supporter, concurred that health care reform must resist opponents of “women’s health care” as a matter of principle.

“Being a woman right now is a pre-existing condition,” she said. “That will never be the case in America again.”