Trending Now
You are at:Home»Featured»People Are Silently Dying for Big Money
By Judie Brown on January 21, 2012 Featured, Life Issues & Bioethics

The politically approved scientific use of human embryonic stem cells (hESC) for research and experimentation has plagued our quest for recognition of intrinsic human rights ever since the first such experiment became public in 1993. In 1998, a University of Wisconsin press release touted a discovery by UW researcher James Thomson and stated, “The dream of one day being able to grow in the laboratory an unlimited amount of human tissues for transplantation is one step closer to reality.”

This UW announcement did not admit the fact that embryonic children would have to die in order for such dreams to become reality. Science now admits that hESC research suffers from still-unresolved serious genetic errors and other scientific problems (see endnotes #13-17 on that site), that not one patient has been cured of anything, and that the major clinical trial by Geron was recently abruptly halted mid-course.

The underlying practice that led to Thomson’s work is in vitro fertilization (IVF). IVF clinics and research laboratories eventually had to confront the question of what to do with unused, unwanted embryonic children. Among the answers was the “donation” of unused human embryos to research with the caveat that the woman give “informed consent” after being deceptively advised that what she was donating was just a “pre-embryo,”— just a “ball of cells” or “tissues.” 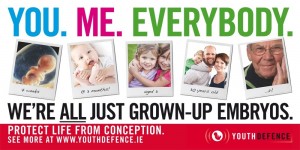 At no point did any clinician or researcher committed to the destructive work ever admit that, in fact, his/her research material consisted of human beings who had been killed for the purpose of his research or therapies. The false promises emanating from the biotech industry that propelled the research purportedly for “infertility treatments” and “curing vulnerable patients of diseases” have always been about money, not the relief of human suffering.

Just last week the Obama administration announced even more taxpayer dollars for the ghoulish practice. During the same week, the science journal Nature published an interesting analysis of stem cell companies and the dubious quest of one such company in particular—ACT (Advanced Cell Technology). The web of intrigue that holds these companies together is certainly fascinating and exposes the variance between reality and what the public is being told.

For example ACT’s chairman, Gary Rabin, an investment banker who has been on ACT’s board since 2007, has uttered nothing but optimism as the company moves forward with its research using human embryonic stem cells transformed into retinal pigmented epithelial (RPE) cells with the hope of someday treating macular degeneration.

Rabin reports that the first clinical trials began in July 2011 at the University of California’s Jules Stein Eye Institute (JSEI), and are being conducted by Dr. Steven Schwartz of JSEI and overseen by ACT’s chief scientific officer Dr. Robert Lanza. “Each patient has received an injection of 50,000 hESC-derived RPE cells in one eye. Both trials will involve twelve patients, and are designed to evaluate the safety and tolerability of the injected RPE cells. Based on the results of the first patient in each study, we are authorized by the Data and Safety Monitoring Board (DSMB) to move forward with the next two patients in the studies, each of whom will also be treated with 50,000 RPE cells.”

Rabin’s celebratory comments and the facts pertinent to these trials never get around to pointing out that, in order for such trials to be conducted, embryonic human beings must be killed. There is no other way for such trials to move ahead. Nor is it usually pointed out that clinical trials run by these researchers can decide to shut down a trial in the middle of it, leaving the patients enrolled in that trial basically abandoned after receiving hESC injections.

This is why it is only fair to say that there is nothing truly ethical about any of this work. In natural law ethics, the “good” must fall back to each and every member of the human society—not just to some (see endnote #22 on this site).

Speaking of ethics, one of ACT’s bioethicists is ex-Catholic nun Carol Tauer whose views have been at odds with Catholic teaching for some years. For example, Tauer recently promoted reproductive cloning and other practices which are in direct conflict with the Church.

Further, as Nature reports, Ronald Green, who is another of ACT’s bioethics advisers and a professor of religion and ethics at Dartmouth College in Hanover, New Hampshire, has a history of endorsing not only hESCR but fetal tissue transplantation as well.

The underlying problem with such research, whether taxpayer funded or otherwise, is that human beings, both preborn and born, are dying and nobody in a position of authority within the political or business community is pointing out this fact. Human beings have become mere commodities and nothing more.

Can such cruel deception continue unabated?

Who will speak out in defense of innocent human persons?