All parents want their newborn child to be “perfect”—free from any physical or mental impairment. Mainstream culture teaches us to reject disabilities, and to reject the children themselves if prenatal tests reveal the presence of conditions like Down syndrome. When we fail to respect inherent human dignity, any number of excuses can be made as to why some lives are worth more than others.

Studies have found that around 90 percent of women who receive a prenatal diagnosis of Down syndrome choose to have an abortion. Listening to abortion activists who approve and encourage these deaths, the general idea seems to be that it would be better for the children not to live because they will have difficult lives, and be a burden to their parents and society.

But Heath White was not so much concerned with how hard his daughter’s life would be as he was with how her disability would reflect on him.

“I’ve got genetically superior genes. I’m a winner with winner’s blood,” he wrote in a letter to his daughter Paisley. “Learning you’re going to have a child with Downs is like experiencing a death. That’s what I felt like. Like I was getting a broken baby. All I could think was: Why me?”

Fear about having a child with Down syndrome nearly conquered him, but in a compelling and beautiful video produced by ESPN, Heath explains how he overcame his fears, and hopes that his story will keep other parents from making the same mistake that he almost did.

Heath, a star athlete who graduated college with a 4.0 and was top of his class at the Air Force Academy, already had one “perfect” child, a daughter, with his wife Jennifer. The couple decided to have another child, and after prenatal testing, learned their second daughter, Paisley, would have Down syndrome.

“I did everything I could to try and force [Jennifer] into having an abortion,” Heath tells the ESPN reporter. “My main concern was what people would think about me as a man, pilot, Air Force officer or whatever; what weakness inside of me caused that.”

Heath decided to write a letter to his daughter Paisley as a way of repentance, and to explain the “emotional rollercoaster” leading to his change of heart.

“Dear Paisley, I wanted to take a second to let you know about the emotional rollercoaster you put me through the past two years. I was afraid you’d someday find out how scared and selfish I used to be. The more I thought about it, the more I decided that I want you to know the truth,” the letter begins.

Acceptance of Paisley’s condition took several months for Heath after Paisley was born. “The turning point, I had her down and I tickled her and she laughed and smiled and tried to push me away. And her laughing and smiling and reacting with me, that’s when I realized that she’s just like any other kid. She’s my kid.” 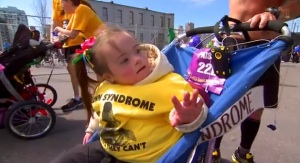 After halting his professional running career during the time he was struggling with Paisley’s birth and condition, Heath began running again following the “turning point” of accepting his daughter. But now he would not run alone; he would bring Paisley with him, pushing her in a stroller.

Heath wanted, “To let everyone know that I was proud of her. Nobody knew the way I felt before she was born. And if I can keep one family, one person, from having to live with the guilt and almost making the mistake that I almost made, it’s going to be worth the pain that Paisley will feel later in life knowing the way that I felt.”

“I wanted people to know just how much you’ve taught me. How much I love you,” Heath wrote in the letter to Paisley. “Before you were born I only worried about how your disability reflected on me. Now there’s no better mirror in the world. You’re my light in the dark. And it’s a privilege to be your dad.”

Many fathers and mothers around the world have no doubt experienced the same emotional struggles as Heath. For a couple trying to have children and grow their family, pondering the abortion of their unborn child would seem bizarre. But when prenatal tests show the child might not be “perfect,” not only does abortion become an acceptable option for some, but spouses, other family members and even doctors may pressure women to kill their child. 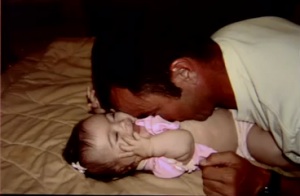 When Heath was pressuring his wife to have an abortion, it wasn’t a question of whether Paisley’s was a human life, only if hers was a life worthy of dignity and protection. When our selfishness causes us to reject the humanity of those different from us, we reject all humanity, and perpetuate a culture that views life as a commodity rather than something that is sacred.

It is a poverty for our nation that we no longer simply recognize and assume the humanity of our brothers and sisters in the womb. For Heath, it took seeing his daughter laugh months after she was born. For others, it’s an ultrasound, or even seeing the graphic images of what really happens during an abortion.

But millions of others angrily refuse to even consider the facts that may inconvenience them, and prefer to allow the destruction of abortion to happen. These are the ones who will not listen to evidence and reasoned argument – they need, like Heath, to have their hearts broken by a personal and undeniable encounter with the humanity of the child rejected in the womb. To this end, we must be grateful for Heath’s courage in letting his story be told, and pray that this video and others like it can move hearts and hasten an end to the lie that abortion is liberating for anyone.