Trending Now
You are at:Home»Featured»Perversity of Righteousness
By Luke Hamilton on September 27, 2014 Featured, Government & Politics, Law & Justice, The Social Order 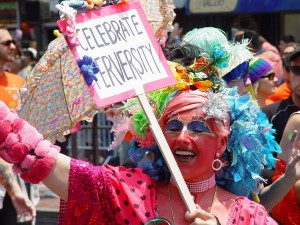 It is downright difficult to shock or awe anyone anymore. The convergence of instant-media platforms and invisible data networks, which connect these platforms to millions of eyeballs, means that anything which happens in the world is eligible for prime time. Like most situations involving groups of anonymous strangers interacting with each other, the trash floats to the top. Our palates have grown jaded and calloused, taught to seek the thrill which lies just beyond the boundary of social approbation. The slope becomes more slippery the further we slide down the hill, increasing the pace and inertia of our demise. Once-forbidden debauchery now sells clothing lines, attracts prime-time viewers, garners political support, spawns lucrative charities, and dominates headline, byline, and through-line of our news cycle.

Shocking is mundane and the outrageous is normal.

There is however one way guaranteed to get the panties of the masses in a collective bundle: mention Christ, the Bible, God, or His people; elaborate on His plan of salvation for a sinful and fallen mankind; affirm the exclusivity of the Christian message in the words of Christ Himself, (“Enter by the narrow gate, for wide is the gate and broad is the way which leads to destruction,” Matt 7:13). Should you communicate this simple message to the right audience, you will soon find yourself, like Abraham Van Helsing, holding aloft a torch in a dank and dusty crypt, surrounded by a horde of snarling individuals, intent on your demise.

Because righteousness is the new depravity. Purity has become debauched. Proof of this exists all around us. Public schools in Chicago announced last year that they are mandating the teaching of Sex Ed—for Kindergarteners. This material is to include homosexual relationships. Apparently, 5-year olds need to know about sodomy. Parents in Freemont, California recently forced the removal of a Sex Ed curriculum that sought to teach 9th graders about bondage and sex toys.

The maddening thing is that instead of being treated like the perverse ideas they are, these initiatives (and others like them) clearly have the support of their school district administrators or they would never have gotten off the ground in the first place. The sexualization of children is now an educational goal.

The flipside of this coin is the stories of children being suspended from school for saying “God bless you” to a classmate. Little ones being told they are forbidden from reading their Bibles during elective reading periods. A young girl being sent to change out of her “Virginity Rocks!” t-shirt because it’s too sexual. These stories have happened and will continue to happen as the moral poles of our society continue their 180-degree shift.

Outside of the school room, those who stand for righteousness are attacked even more viciously. Phil Robertson, the patriarch of the Duck Dynasty clan, was suspended from his television show for stating his religious belief regarding human sexuality in a magazine interview. Tim Tebow, after openly speaking about the faith which drives him and his commitment to remain sexually-pure before marriage, finds himself blacklisted in the NFL. This was clearly not a “football decision” since the Jets kept Mark Sanchez on the roster.

Chick-fil-A was roundly derided when its founder declared his honest support for traditional marriage. Hobby Lobby has been the target of ridicule and derision ever since it sued the Obama Administration in order to avoid being forced to subsidize abortifacient birth control for its employees. The list grows longer daily, of individuals and companies who are ostracized for their attempts to manifest a God-honoring position in their lives and businesses.

The light borne by groups and individuals who seek the righteousness of God is a powerful stimulant. The light illuminates the darkness and makes those who lurk there painfully aware of their iniquity. Consequentially, the source is attacked, in an attempt to shutter the light and plunge back into the unmolested darkness.

Make no mistake, carrying His light into the darkness isn’t a quest undertaken only by the brave or the adventurous. It is a command for every believer to fulfill in his lifetime. The bare minimum of our commission is to be prepared, as the Apostle Peter commands, to give a reason for the hope within us to whomever asks. Sadly, we no longer have to venture far to fulfill this mission, as the darkness envelops us where we stand. Simply standing for His truth in today’s world is enough to attract the enemies of righteousness and beckon to those who have gone astray in the moral twilight in which we are mired.

How does this duty to bear God’s light into the world square with the modern world’s assessment of objective truth as offensive? It doesn’t. After all, truth is offensive to those who have a stake in a lie. The question to consider is, do we believe the Gospel to be the truth? If we do not, then why claim to believe it? If we do, then what shame can be had in bringing it to others? These thoughts and questions are asked honestly and with abundant introspection.

Standing for God’s righteousness is not something which comes easily to anyone, even though there are those who seem naturally suited to it. If it was easily done, we wouldn’t have to fight tooth-and-nail to try to protect righteousness from being replaced by sacrilegious debauchery. Yet fight we must.

If sinners be damned, at least let them leap to Hell over our dead bodies. And if they perish, let them perish with our arms about their knees, imploring them to stay. If Hell must be filled, let it be filled in the teeth of our exertions, and let not one go unwarned and unprayed for. (C.H. Spurgeon)