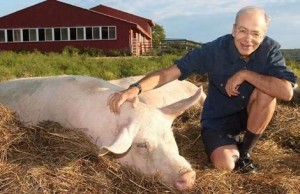 Noted animal rights philosopher Peter Singer recently delivered an address to students at the Stevens Institute on the topic of “Ethics and the Election.” He was discussing the American elections while speaking to an Australian audience, and what he had to say is of interest on several levels.

As a defender of universal healthcare, Singer takes the view that abortion for example, is a necessary evil, but he comes to this conclusion in a most unusual fashion. He “agreed with many pro-lifers that a fetus, even at six weeks, is a ‘living human being.’” But, according to the article, “Singer nonetheless believes that abortion is ethical, because even a viable fetus is not a rational, self-aware person with desires and plans, which would be cut short by death; hence it should not have the same right as humans who have such qualities. Abortion is also justified, Singer added, both as a female right and as a method for curbing overpopulation.”

This astoundingly specious statement gets to the heart of what it is that drives Singer’s quest. In his perfect world some animals such as chimpanzees would be valued more worthy of human rights than human beings. This is so because, according to Singerian criteria, without self-awareness a being cannot be defined as a full-fledged member of the human species. Consequently, such an entity cannot be protected as a human individual; this means that newborns, some people with disabilities, and those in an alleged vegetative state would be excused from their personhood and therefore their intrinsic human rights.

There are those who might find such a position as nigh on to ridiculous, but let’s examine another recent article. In a Frontpagemag.com story, author Daniel Greenfield stated, “Do you know how people laugh at those stories about rats being put on trial in the Middle Ages? These days, Spain grants personhood rights to apes and New Zealand granted personhood rights to a river. (A baby in the womb however is just a stray collection of cells and only some kind of ignorant religious fanatic would assume that it had any personhood. It’s not like it’s a river.)

Greenfield continued, “As I’ve said before, 90 percent of animal rights and environmentalist activism is about disenfranchising people and enfranchising things that cannot represent themselves, but can only be represented by liberal activists.”

Such an opinion may sound like nothing more than a different form of political extremism designed to instill fear, but the truth is, as usual, stranger than fiction. It has taken people like Peter Singer and his collaborators many years to make the inroads they have into the formation of opinion and deconstruction of ethics, but their time has come. If we choose not to pay attention to these warning signs, our quest to protect the intrinsic human rights of human beings is imperiled and will fail.

Scientists in Oregon have created embryos with genes from one man and two women, using a provocative technique that could someday be used to prevent babies from inheriting certain rare incurable diseases.

The researchers at Oregon Health & Sciences University said they are not using the embryos to produce children, and it is not clear when or even if this technique will be put to use. But it has already stirred a debate over its risks and ethics in Britain, where scientists did similar work a few years ago.

There’s that word again—ethics. There was once a time when ethical principles were directly connected to the natural law, thus ensuring a safeguard that would not permit macabre science from becoming mainstream. But today that measure of man’s integrity has been diluted, and the reason this is so is exemplified in reports not only of Peter Singer’s theories but others who have assumed unto themselves the role of God.

It’s time to do a reality check. The utopia envisioned by Singer and his contemporaries is upon us. The only defense we have is truth grounded in natural law as taught in Thomas and by those who understood that, with God, nothing is impossible and everything is plausible.