Trending Now
You are at:Home»Featured»Phill Kline: The Man Who Knows Too Much
By Judie Brown on October 19, 2011 Featured, Life Issues & Bioethics 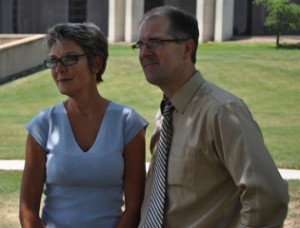 Former attorney general Phill Kline is under attack by the world’s leading proponent of abortion, Planned Parenthood. It isn’t stated that way in the media headlines, of course, but the facts are clearly evident among those who have eyes to see, ears to hear, and the ability to discern the presence of evil.

The 1956 Alfred Hitchcock suspense film, The Man Who Knew Too Much, featured Jimmy Stewart in the leading role of Ben. Over the course of the movie tragic things happen: one bad buy falls to his death and another abducts Ben’s son. Yet, in the end, Ben emerges victorious as he finds his son and helps expose the larger plot to kill a government dignitary. Good triumphed over evil. But that was a movie—a work of fiction.

The Phill Kline emerging dilemma is real life. This time the bad guys are in charge of the script and are skewing the evidence. That is Planned Parenthood’s modus operandi in nearly every situation, but we have an obligation to defend Phill against such deceptive tactics parading as fact.

To put this in perspective we must go back to 2007, the year during which Kline, then a Kansas district attorney, “charged Comprehensive Health of Planned Parenthood of Kansas and Mid Missouri with 107 criminal charges after a District Court judge reviewed the evidence and found probable cause that crimes have been committed. The charges stem from just 29 files dating back to 2003.”

When Brian Burch, founder of Catholic Vote and Fidelis Center for Law and Justice, wrote about the case in 2007 he warned, “America must watch this Kansas situation very closely. If the courts step in to rescue Planned Parenthood from the rule of law, it would be one of the most blatant acts of judicial activism and a trampling of First Amendment rights.” One could now say that Burch was a prophet and things took a left turn just as he had predicted they might.

Over the past seven years Phill Kline has been under investigation for “suspected” ethics violations in conjunction with these files. Of note is the fact that each of the 107 charges Kline originally brought against Planned Parenthood remain in place, but now Kline has been effectively punished for daring to expose the terror Planned Parenthood perpetrates against its customers.

Jenn Giroux and supporters of Women Influencing the Nation were “heavily involved in supporting the efforts of former Attorney General Phill Kline in his criminal charges against Planned Parenthood and to enforce the Late Term Abortion Law inside Kansas, the abortion capital of the world. Jenn testified before the Kansas Legislative Committee on September 6, 2007, representing over 5500 petitions asking Kansas officials to prosecute George Tiller for doing illegal abortions.” Now Jenn is working to get the facts out about the charges against Kline which have resulted in his alleged “guilt” in the ethics charge matter. As Giroux points out in an urgent alert received in our office yesterday, “These findings against Phill Kline are nothing but an effort to distract from the real and condemning evidence against Planned Parenthood. To be clear, none of these findings impact the underlying evidence against PP and (the original charges against) Tiller. Although the theme for years is that the investigation was flawed due to Phill Kline’s actions, nothing in this report affects that evidence or claims [that]any of that evidence, or Phill Kline’s representation of that evidence, was false or misleading.”

The suspension of Kline on ethics violations is currently on appeal to the Kansas Supreme Court. In a prepared statement released to the media on October 13, Kline stated, “My ‘mistake’ was my willingness to investigate politically powerful people and to let that investigation go where the evidence led.”

Jenn Giroux has been involved in exposing illegal abortions inside Kansas since 2006, supporting Kline’s efforts to enforce Kansas abortion law and in holding both George Tiller and Planned Parenthood accountable. She later signed on as Kline’s re-election campaign manager in 2008 and is the nation’s leading expert on Phill Kline’s strong character and commitment to truth.

As Giroux explained to me, “For anyone who is wondering, ‘Oh no, is it possible that any of the findings are true?’ let me assure you the answer is, ‘No! None of this is true.’ As you know I have seen this entire battle up close. There are no words to describe the outrage in this finding and recommendation, nor the pain that has been inflicted upon this family.”

This is why I am encouraging readers to contact Giroux directly and get involved in providing prayer support and words of encouragement to Kline and his family at this critical time. You may e-mail Jenn Giroux atJenngiroux9@gmail.com.

And remember the profound words of Edmund Burke, “All that is necessary for the triumph of evil is that good men do nothing.”