Trending Now
You are at:Home»Featured»Pius XII, Richie, Potsie, and the Fonz: Happy Days 2.0
By Dr. Gerard Nadal on June 14, 2013 Featured, The Social Order 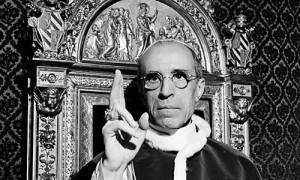 “A day will come when the civilized world will deny its God, when the Church will doubt as Peter doubted. She will be tempted to believe that man has become God. In our churches, Christians will search in vain for the red lamp where God awaits them. Like Mary Magdalene, weeping before the empty tomb, they will ask, ‘Where have they taken him?’ “ -Pope Pius XII

Prophetic words from a great man, a great Pope who was lionized by the Jews in the waning days and years after World War II. Not until the calumny against him began in the early 1960’s did anyone regard him as anything less than a prophetic voice in the Church. I’m happy to have been a part of restoring the truth about Pope Pius in recent years.

We look around us today, and often I hear people longing for the days of the 1930’s, 40’s, 50’s. It’s a romanticized period, a romanticism that made its way into my life in the eighth grade when the hit T.V. series “Happy Days” made its debut. It was an iconic time in American life. Jimmy Stewart and Donna Reed in Frank Capra’s “It’s a Wonderful Life”, Bing Crosby in “Going My Way” and “The Bells of St. Mary’s”.

From speaking with those in my parent’s and grandparent’s generations, it definitelywas as simpler time in many respects. But in that nostalgic and idealized world, Pope Pius XII uttered that dread prophecy. So what was going on, really going on? Consider the following quotes from contemporary sources in World War II:

Albert Einstein- Time Magazine, December 23, 1940:
“Being a lover of freedom, when the revolution came in Germany, I looked to the universities to defend it, knowing that they had always boasted of their devotion to the cause of truth; but, no, the universities immediately were silenced. Then I looked to the great editors of the newspapers whose flaming editorials in days gone by had proclaimed their love of freedom; but they, like the universities, were silenced in a few short weeks…Only the Church stood squarely across the path of Hitler’s campaign for suppressing truth. I never had any special interest in the Church before, but now I feel a great affection and admiration because the Church alone has had the courage and persistence to stand for intellectual truth and moral freedom. I am forced thus to confess that what I once despised I now praise unreservedly.”

The New York Times editorial on December 25, 1941 (Late Day edition, p. 24):
“The voice of Pius XII is a lonely voice in the silence and darkness enveloping Europe this Christmas… he is about the only ruler left on the Continent of Europe who dares to raise his voice at all… the Pope put himself squarely against Hitlerism… he left no doubt that the Nazi aims are also irreconcilable with his own conception of a Christian peace.”

Also The New York Times editorial on December 25, 1942 (Late Day edition, p. 16) states:
“This Christmas more than ever he is a lonely voice crying out of the silence of a continent… Pope Pius expresses as passionately as any leader on our side the war aims of the struggle for freedom when he says that those who aim at building a new world must fight for free choice of government and religious order. They must refuse that the state should make of individuals a herd of whom the state disposes as if they were lifeless things.”

The New York Times on the liberation of Rome:
“Under the Pope’s direction the Holy See did an exemplary job of sheltering and championing the victims of the Nazi-Fascist regime. I have spoken to dozens of Italians, both Catholics and Jews, who owe their liberty and perhaps their lives to the protection of the Church.”

Chief Rabbi of Rome:
Rabbi Israel Zolli in 1945 converted to Catholicism with his wife, and in honor of all the Pope did for the Jews during the War took Pius XII’s name, Eugenio and had the Pope as his Godfather.

Chief Rabbi Herzog of Palestine:
“The people of Israel will never forget what his Holiness and his illustrious delegates are doing for us unfortunate brothers and sisters in the most tragic hour of our history.”

FDR –August 3, 1944:
“I should like to take this occasion to express to His Holiness my deeply-felt appreciation of the frequent action which the Holy See has taken to render assistance to the victims of racial and religious persecutions.”

Pius was pope during the most convulsive period in all of human history. Eighty percent of his priests, brothers and nuns in Eastern Europe perished at the hands of the Nazis, virtually all of whom were baptized Catholics and Protestants who turned their backs on their Christian faith and followed the bloodlust of one of humanity’s greatest tyrants.

Some fourteen million people, including six million Jews perished in Hitler’s camps. Between 3.17% and 4% of the world’s population (62.5million-78.9 million humans) perished in that war.

Pius saw the turn of Protestantism to the embrace of contraception in the 1930s, the rise of eugenics in the first four decades of the century, and the beginnings of Nazi atrocities developing first in the corrupted medical community. Pius eyed the thirty-plus states in America that had forcible sterilization laws on the books and was no doubt appalled by the U.S. Supreme Cout’s upholding of those laws in its 8-1 decision in Buck v. Bell. Margaret Sanger, a once devout daughter of the Church rivaled Pius for the hearts and minds of Catholic couples.

Racism flourished in the Twentieth Century, and there were more man-made famines because of those intolerances than in any period before. Then came the perfection of annihilating humans by the millions with the atomic and hydrogen bombs.

Happy days, they were not. Yet many long for those “simpler” times. In so doing, they overlook the challenges faced by Christians in those darkest hours of human existence.

It has never been a good time to be a Christian. The Apostles, save John, all met a martyr’s death. The first few centuries saw Christians hunted down, fed to wild beasts in the Colliseum, doused in oil and used as torches. They met in catacombs, in the shadows.

When I was confirmed, the Bishop tapped each person’s cheek as a symbolic reminder to be prepared to die for the faith. We’ve had twenty centuries of martyrs. We live today during the pendulum swing back toward eugenics, but we also live in great times as well.

We no longer institutionalize the handicapped. They are integral parts of their families’ lives. We’ve developed miraculous therapies that teach them to speak, excel academically and vocationally. We now have sonogram technology that convinces 9/10 women contemplating abortion that there is a baby, marvelously fashioned, in her womb.

We have cures for cancers, antibiotics, vaccines, abundant and inexpensive food. The list goes on and on.

But we have our own challenges. We face a darkening world not unlike the darkness that enveloped Europe all those years ago. Like Einstein, we can no longer look to the newspapers or the universities for truth. Like Pius and the priests/religious/laity who heeded his call and paid with their lives, we are expected to stand and resist this evil, even at the cost of our own lives.

Those days weren’t as happy as the 70’s sitcom would have us believe. The world wasn’t as naive as we would suspect. Carly Simon got it right in the 70’s while Happy Days was enjoying its popularity,

“These are the good old days.”

Let’s take renewed strength and inspiration from Pius XII’s example and do the work we are called to do, both in the Church and in the Public Square, in order to prevent his dread prophecy from coming to fruition.