Trending Now
You are at:Home»Featured»Please, Profile Me!
By Mary Kochan on September 11, 2012 Featured, Law & Justice 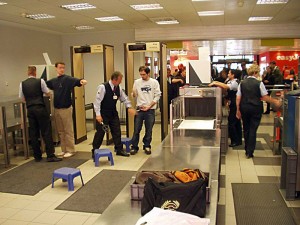 Okay, just for the record here is the profile. I am white, a US citizen, in my mid 50’s, a grandmother, and a practicing Catholic. Rosaries, prayer books, medals, scapulars and other such paraphernalia are from time to time located on my person.  I know a few other women who fit that profile and while we are a far cry from being a bunch of sedate old ladies with our hair up in buns whiling away the hours on rockers, we tend to be a fairly law-abiding bunch. To my knowledge, no one who fits this profile has ever hijacked or attempted to blow up an airplane, committed a suicide bombing, or machine gunned a roomful of people in God’s name.

I have never heard a Catholic grandmother use the Bible, or the Catechism, or some Marian message to make the case for bringing death to a plane load of strangers and raining destruction down upon innocent civilians below.

But it could happen. I mean there is nothing to keep it completely out of the realm of possibility, is there?

So, let’s say that it does happen some day. Then what.

Should I be subjected to extra searches and interrogation at airports on account of the anomalous behavior of some other grandmother? No. I don’t think so. I don’t think that the fact that just one time some other grandmother committed a terrible crime — attempting or succeeding in using an aircraft as a weapon of mass destruction or maiming and killing innocent civilians — should cast any suspicion on me. Even if she pretended to find in the pages of Sacred Sacred Scripture or the Tradition of the Church justification for murder and even though I do adhere to those writings, her esoteric interpretation should by no means be ascribed to me. Not even by suspicion.

Not the first time.

But the second time? The third? The fourth? The fifth? The 20th?

Long before the isolated incident of a Rosary-toting terrorist has become a rash, you will find me begging  — PLEASE, PROFILE ME! Please!

I will do anything and everything in my power — be subject to pat downs and sniffed by bomb detecting dogs and answer anything you want to know about where I am going and why — to reassure my fellow Americans that they are safe flying with me. You may go over my luggage with a fine tooth comb. Don’t want me to bring any luggage on the plane? Fine. I will ship my suitcase to the hotel ahead of time.

Would it disturb me that writings I hold sacred were being used to condone or incite horror and violence? Yes.  It would trouble me greatly, but my own clear and unequivocal condemnation of that violence and obvious commitment to the common good would best defend the reputation of those writings. They would not be served by objecting to my religion being singled out for profiling — not after hundreds of deaths.

I would understand. I had become frightening, with a profile similar to that of a murderous terrorist, excuse me — I mean a rogues’ gallery of murderous terrorists. I would not resent your questions. I would not think you were being unfair to me. The unfair people would be all the other white Catholic grandmothers who set off bombs and shot people. They would be the ones who to blame for the precautions you have to take with me. I would be glad you were taking them, because I would understand that they were for keeping me safe too!

So please don’t wait until the 20th time. I’m ready — the 2nd time a Catholic grandmother hijacks a plane, sets off a bomb in a subway, or carries out an assault on a motel, for the sake of security and justice, I beg you: PLEASE, PROFILE ME!