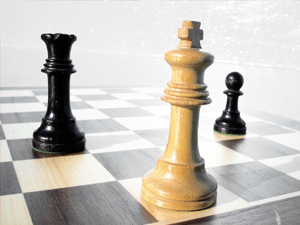 Plutocracies are societies where majority wealth is controlled by a shrinking minority. They are driven by economies powered and consumed by the wealthiest class over a mass population dependent upon their fortunes. Wealth creation is the principal motivator in these economies and corporations are their vital actors. Snatching public policy away from the hands of citizens, corporations further their interests through size, market dominance, and disproportionate political influence, enjoying an unparalleled lobby ensuring biased legislation and guaranteeing, among other things, their “personhood,” the legal fiction used by corporate interests to willfully neglect conscience and accountability “under the shelter of a joint name,” from which, as Pius XI wrote, “the worst of injustices and frauds are penetrated.”

The impact of for-profit control over our society has reenergized what some astute observers call plutonomy and plutonomy is exactly what we are living under today.

Corporations, as we know them today, rarely existed before the 19th century. Back then corporations served public purposes and were granted legal status under specific and strict provisions. Corporations were created by the state at the behest of private interests, endued with privileges and liabilities distinct from ownership, so that, should they fail, both investors and employees would be shielded from responsibility for company debts. Manufacturing, banking, construction, and other corporations were few in quantity and, in some cases, came into being with an expiration date.

Over time however, incorporation became more accessible. Lax regulations allowed corporations to proliferate. As they gained footholds over our national economy, and with individual states eagerly competing to accommodate their needs regardless of corporate guidelines and despite public interests, corporations easily dodged operational review. As Pius XI observed, “The laws passed to promote corporate business, while dividing and limiting the risk of business, have given occasion to the most sordid license.”[1] The Fourteenth Amendment, which protected the civil and political rights of its citizens and overruled previous decisions denying blacks the immunities and privileges enjoyed by the rest of the population, was arguably the first case to bestow “personhood” to corporations, entitling them to the same liberties and protecting them from any violation of rights natural to human persons.

In keeping with the unnatural “persons” they are, corporations, writes Christopher Ferrara, “display all the personality traits of a psychopath.” Citing 1st, 4th, and 14th amendments, corporations have a long history of relentlessly pursuing certain “freedoms”; freedom to lord over the mass of citizens, freedom from oversight and regulation. For example, in 1933, J.C. Penny sued the state of Florida and claimed Fourteenth Amendment equal protection after the state imposed a differential tax favoring small business against chain stores.[2] In 1967’s See v. City of Seattle, corporations benefitted from the court ruling prohibiting the fire department from entering private property without a warrant, to avoid random environmental, health, and safety checks. In 1978’s First National Bank of Boston v. Bellotti, the U.S. Supreme Court declared corporate persons as having the same free speech rights as natural persons, allowing them to spend unlimited sums of money towards expressing their agenda through advertisements and campaign contributions. With enormous financial resources, personhood netted corporations free speech and voting rights, as well as limitless access to Congress, unofficially granting these corporations first class citizenship while the rest of us “humans” suffer the effects of their relentless, successful lobbying.

It isn’t a stretch to accuse corporate free speech of extinguishing freedom of the press. As if taking a cue from the encyclical Mirari Vos, the great Soviet dissident Alexander Solzhenitsyn charged our corporate media with disinterest in any meaningful analysis of our real problems and irresponsible publishing, citing the people’s right “not to have their divine souls stuffed with gossip, nonsense, vain talk.”[3] The scandalous press and their surrender to false common values are indicative of shrinking competition: NewsCorp owns Fox and its affiliates, holds stock in the Wall Street Journaland New York Post, and various online services. TimeWarner, the biggest media conglomerate, owns CNN and its international affiliates, HBO and several cable networks, as well as TIME, People,Sports Illustrated, and Fortune.

When we grant the rights of individuals to corporations, privacy and free speech rights, including the influencing of political leadership and legislative redress, we may wish to ask whether the mass of citizens and corporations are truly enjoying the same impartiality guaranteed by the bestowing of equal rights. Are corporations and the rest of us judged and penalized equally, even when these “persons” pollute our air and water, perpetuate fraud against consumers, or violate the public health?

We, the Plutocrats of the United States

In the 1920s, General Motors killed the electric streetcar. The streetcar was efficient and saved taxpayers millions of dollars, but it also presented a competitive problem for General Motors. With the convenience and cheap cost of streetcars, automobile sales flatlined. Unable to sell more cars or prevent the filthy wheels of mass production from grinding, GM waged war against its competitor. Conspiring with Firestone Tire and petroleum companies like Standard Oil, General Motors purchased electric trolley lines and then drove them out of the marketplace. In over 80 cities they dismantled electric streetcars and replaced our public roads with motorized buses and trucks. Following an investigation by the Justice Department in 1936, General Motors was found guilty and fined a whopping $5,000, a slap in the wrist by today’s standards, even if we adjust for inflation.

In 2004, the insurance giant AIG was charged with accounting fraud and forced to pay $126 million dollars in a settlement with the Securities and Exchange Commission. The company avoided criminal charges. Two years later the same company “agreed to pay state and federal regulators more than $1.6 billion and change business practices to settle allegations that it engaged in securities fraud, bid-rigging, and failed to make contributions to workers’ compensation funds.”[4] Once again, the company dodged criminal charges.

Citigroup, along with JP Morgan Chase, coughed up over $300 million to settle accusations the banking giant helped conceal Enron’s true financial condition before collapsing. In 2003, Citigroup paid $143 million in various fines and penalties. The following year Citigroup paid $2.65 billion to settle scandals involving WorldCom stocks and bonds. In 2005, accused of manufacturing reports and concealing conflicts of interest, it settled with investors of Global Crossing for $75 million. That same year, and again in June of 2007, Citigroup was charged with providing misleading documents and faulty mutual fund practices, paying over $35 million in fines and restitution.

Not all news is bad news. As The Examiner reported in December, Los Angeles became the first major U.S. city to unanimously vote against corporate personhood, calling for a Constitutional Amendment asserting corporations are not entitled to the same constitutional rights as persons.[5] Last year the U.S. Supreme Court “ruled against AT&T’s claim that personal privacy rights prevent the federal government from disclosing agency records that might reveal corporate wrongdoing to the public… AT&T may not invoke FOIA exemptions that protect ‘personal privacy’ in order to stop FCC disclosure of documents that refer to it.”[6] Citigroup may also finally face criminal charges. Last month, Federal District Judge Jed S. Rakoff refused to approve a $285 million dollar settlement between the SEC and Citigroup “involving transactions in which the bank bet against mortgage-backed securities it sold to customers.”[7]

According to leaked Citigroup memos, plutonomies are “economies powered by the wealthy,” from which we “will likely see even more income inequality,” thanks to “capitalist-friendly governments…and globalization.”[8] Indeed, the memos go on to admit the current existence of plutonomies, ubiquitous whenever “economic growth is powered by and largely consumed by the wealthy few…” The authors wax cheerfully of our inability to recuperate sane economic measures to end plutonomies without traveling back in time and changing our “fertility rates,” an obvious reference to the population imbalances caused by the twin evils of contraception and abortion. The same memos, quoting Kevin Phillips’ Wealth and Democracy, openly credit the rise of plutonomy with technological fascination, the role of creative finance, cooperative government, immigration and overseas conquests, the rule of law, and patented inventions.

According to the Citigroup memos the only antidote potent enough to curb the rise of plutonomies are structural regulations and ideological tax policies in favor of the mass of citizens. They credit the First and Second World Wars and the post-Depression era as the source of plutocratic decline. That is, until the 1980s emerged and corporate and income taxes relaxed, shifting the earlier “coupon-clipping, dividend-receiving rentiers,” to our current “Managerial Aristocracy indulged by their shareholders.”

Christ the King Will Prevail

Conservatives harp on public subsidiarity. The more decentralized government is, they argue, the better. And this should be applauded. But they ignore subsidiarity in the private sector and support the free competition challenged by the social teachings of the Church, giving large businesses like Wal-Mart, ExxonMobil, Gap or big banks a pass. Progressives, on the other hand, stress the importance of private subsidiarity while ignoring the leviathan of our central government and, therefore, the public subsidiarity necessary to distribute competent authority into smaller units. What we need is both public and private subsidiarity to replace plutocracy and bureaucracy; a Christian course out of the plutonomy and “insatiable greed… blind and immoderate selfishness, making men seek nothing but their own comfort and advantage,” prevalent in a nation which has, for the greater part of its history, ignored the Kingship of Christ from the onset and continue to repudiate the truth faith. Is it any wonder, then, why we are under the clutches of big business and big government? Lest we forget, Pius XI’s caution against challenging the authority and Kingship of Christ, the unequivocal authority of Jesus described by Annum sacrum as the “empire of Christ the King,” includes not only Catholic nations but the whole of mankind—all are “subject to the power and dominion of Jesus Christ.”[9]

Let us call for the restoration of expiration dates on corporate charters, the downsizing of both our public and private sectors, and encourage alternate forms of incorporation, perhaps based on “for-profit, non-profit” models, where surplus is used to accomplish specific moral and social purposes rather than primarily pay dividends. The creation of a traditional Catholic political action committee, tasked with the mission of bending every knee to Christ the King, defending the weakest in society, including the lives of the unborn, advocating for a positive Catholic economy to replace our plutonomy, calling for public and private subsidiarity, and fighting legal fiction like corporate “personhood”; a new lobby insisting upon political harmony with the principles of the Church.

Collective organization under a corporate structure is not intrinsically evil. However, perhaps we should heed the criticism of Pius XI who warned, “corporative order savors too much of an involved and political system of administration… it rather serves particular political ends than leads to the reconstruction and promotion of a better social order.”[10]

[5] “No More Corporate Personhood in LA, Unanimous” The Examiner, http://www.examiner.com/human-rights-in-national/no-more-corporate-personhood-la-unanimous.