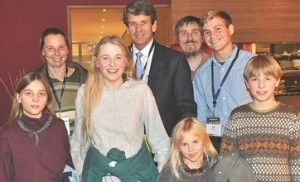 The sole grounds for removal were that the parents, Dirk and Petra Wunderlich, continued to homeschool their children in defiance of a German ban on home education.

As the family quietly began their homeschool day, they were interrupted by a ring at the door. Dirk Wunderlich described the frightening turn of events.

“I looked through a window and saw many people, police, and special agents, all armed,” he said. “They told me they wanted to come in to speak with me. I tried to ask questions, but within seconds, three police officers brought a battering ram and were about to break the door in, so I opened it.

“The police shoved me into a chair and wouldn’t let me even make a phone call at first. It was chaotic as they told me they had an order to take the children. At my slightest movement the agents would grab me as if I were a terrorist,” he said. “You would never expect anything like this to happen in our calm, peaceful village. It was like a scene out of a science fiction movie. Our neighbors and children have been traumatized by this invasion.”

Wunderlich said that his 14-year-old daughter Machsejah had to be forcibly taken out of the home.

“When I went outside, our neighbor was crying as she watched,” he said. “I turned around to see my daughter being escorted as if she were a criminal by two big policemen. They weren’t being nice at all. When my wife tried to give my daughter a kiss and a hug goodbye, one of the special agents roughly elbowed her out of the way and said, ‘It’s too late for that.’ What kind of government acts like this?”

After the children were taken away, the family was asked to attend a meeting with the senior social authority in charge at the scene. The Wunderlichs agreed to the meeting and were joined by their attorney, Andreas Vogt, who came as soon as he was notified, traveling hours by train to attend.

When the parents asked when they could seek a hearing to contest the seizure of their children, they were told they would have to wait until the regular judge returned from vacation. Vogt told Home School Legal Defense Association that the authorities had displayed little sympathy.

HSLDA obtained and translated the court documents that authorized this use of force to seize the children. The only legal grounds for removal were the family’s continuation of homeschooling their children. The papers contain no other allegations of abuse or neglect. Moreover, Germany has not even alleged educational neglect for failing to provide an adequate education.

Judge Koenig, a Darmstadt family court judge, signed the order authorizing the immediate seizure of Dirk and Petra Wunderlich’s children on August 28. Citing the parents’ failure to cooperate “with the authorities to send the children to school,” the judge also authorized the use of force “against the children” if necessary, reasoning that such force might be required because the children had “adopted the parents’ opinions” regarding homeschooling and that “no cooperation could be expected” from either the parents or the children.

HSLDA Chairman Michael Farris said Germany has continued to show its disregard for the human right to homeschool. “Germany has grossly violated the rights of this family,” he said. “This latest act of seizing these four beautiful, innocent children is an outrageous act of a rogue nation.”

The right of parents to decide how children are educated is a human right of the highest order, said Farris.

“The United States Constitution is not alone in upholding the right of parents to decide how to educate their children,” Farris said. “Germany is a party to numerous human rights treaties that recognize the right of parents to provide an education distinct from the public schools so that children may be educated according to the parents’ religious convictions. Germany has simply not met its obligations under these treaties or as a liberal democracy.”

“HSLDA and I will do whatever we can to help this family regain custody of their children and ensure that they are safe from this persecution,’ he said. “This case demonstrates conclusively why the Romeike asylum case is so important. Families in Germany need a safe place where they can educate their children in peace.”

The Wunderlich family has faced their share of problems in trying to homeschool their children. In October 2012, state youth officials were granted formal legal custody of the Wunderlich children by a German court based solely on the fact that the family was homeschooling, but the ruling was forestalled by Vogt.

Over the past four years, HSLDA has reported on the Wunderlich family as they have moved from country to country in the European Union looking for a place to call home where they could freely homeschool their children.

Although they found refuge from homeschool persecution, Mr. Wunderlich was unable to find work, and last year the family had to return to Germany. At their return, the children’s passports were seized to ensure they couldn’t flee the country again.

Following the raid, Dirk Wunderlich told Mike Donnelly, HSLDA Director for International Affairs, that he and his wife were devastated.

“These are broken people,” Donnelly said. “They said they felt like they were being ground into dust. They were shaken to their core and shocked by the event. But they also told me that they had followed their conscience and the dictates of their faith. Although they don’t have much faith in the German state, they have a lot of faith in God. They are an inspiring and courageous family.”

“I’ve been fighting for German homeschool freedom for years,” he continued, “and I had hoped that things were changing in Germany since it has been some time since brutality of this magnitude has occurred. But I was wrong.”

Petra Wunderlich said her heart was shattered. “We are empty,” she said. “We need help. We are fighting but we need help.”

HSLDA has begun a nationwide campaign to urge American homeschoolers to call the German embassy and its consular offices in the United States to protest this blatant violation of Germany’s human rights commitments.