Trending Now
You are at:Home»Columnists»Polish Priest Discovers He is a Jewish Holocaust Survivor
By Peggy Bowes on November 19, 2011 Columnists, Featured, On TV and Movies 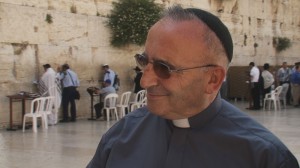 Imagine you are a Catholic priest in your 30s. Suddenly, at your mother’s deathbed, your world is turned completely upside-down. This was Polish Father Romuald Waszkinel experience when he learned that his real name is Yaacov (Jacob) Weksler and that his birth mother was a Jew. His Jewish Mother, Batia, had given him to Polish Catholic neighbors in order to save him from the Nazis and the Holocaust during World War II. His Polish Catholic mother, Emilia, raised him.

Torn is the apt title for a fascinating documentary featured in Manhattan’s The Other Israel Film Festival (http://www.otherisrael.org/films). Torn explores the dilemma faced by Fr. Weksler-Waszkinel, who lives in Lublin, Poland, as he tries to navigate his feelings of confusion and anxiety brought on by this identity crisis.

For years Fr. Waszkinel continues his work as a priest but is upset by anti-Semitic sentiments exhibited by many Catholics in Poland and in the Polish Catholic church. The Catholic Church preaches that anti-Semitism is a sin and Catholics know this, but he experiences anti-Semitism all around him. He compares this to “people smoking under a sign that says ‘No Smoking.’”

Nearing retirement in his mid-60s, Fr. Waszkinel feels compelled to move to Israel and immerse himself in the Jewish culture and faith of his birth mother. He hopes to live in one of the monasteries in Israel, but none will accept him.  Changing tactics, he attempts to enter a kibbutz (a communal farm or settlement in Israel) and asks to leave every Sunday to celebrate Mass. The kibbutz leaders refuse his request. Distressed, Fr. Waszkinel declares, “I can deny everything, but not Jesus!” He finally agrees to their conditions and moves to Israel to join the kibbutz.

Catholics will no doubt scratch their heads, thinking that to give up saying Mass is essentially to deny Jesus. I felt Torn about this myself until I talked to the director of the film, Ronit Kertsner.  She was empathetic to the Fr. Weksler-Waszkinel dilemma, as she too discovered in her 30s that her adoptive parents had not been truthful about her true identity.

Ronit muses, “Suddenly I had no idea who I was, which is ridiculous. Nothing had changed. I was married. I had two daughters and my life was fine, theoretically. Somehow I just got completely disconnected from my past. I guess this is what’s called an identity crisis. A psychologist told me that your identity is like a woven tapestry. Sometimes one strand gets torn, and the whole thing falls apart.”

When I asked Ronit why a Jewish audience would be drawn to a film about a Catholic priest who wants to live in Israel, she went straight to the details I had overlooked.

“It’s not just a Catholic priest who found out he is Jewish. His story is of the Holocaust. Part of why he became a priest was that he was raised as a Catholic as a result of his Jewish mother’s sacrifice. She was being sent to her death and the only way she could save him was to give him to a Catholic family. Father’s whole confusion, his whole ordeal is because of what happened during the Holocaust.

Torn is a very sensitive portrayal of Fr. Weksler-Waszkinel’s anguish at his mixed identity. He wants to have it both ways but clearly he cannot. I was impressed by the goodwill shown to him by both Catholics and Jews. After he says his last Mass in an Ursuline convent in Poland, the nuns serenade him with a guitar and music, wish him well and promise to pray for him. You can clearly see the sisters’ love for this priest and their regret at his decision.

When he arrives in Israel, the members of his new Jewish community make him feel welcome and are patient with his attempts at learning their language and customs.

Currently, Fr. Weksler-Waszkinel is working at a Holocaust memorial in Jerusalem. He still has three years to come to a decision regarding Israeli citizenship. According to Ronit he has not yet officially left the priesthood.

Torn was shown at the Other Israeli Film Festival on November 15th and 16th. Details are available at http://www.otherisrael.org/films. Readers wanting to learn more about the Jewish faith might enjoy reading Catholic author Cheryl Dickow’s fascinating book, Our Jewish Roots: A Catholic Woman’s Guide to Fulfillment Today by Connecting with her Past.