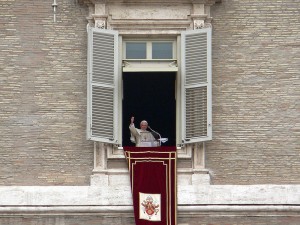 He was born in 1927 in Marktl-am-Inn in southern Germany.

But also today, shocking revelations coming out of Belgium, where an archbishop has confessed in a television interview to sexual activity with two of his nephews, continue to reverberate.

Reflections on Our Crisis

The present crisis of our Church is not something that can be exorcised merely with a wish and a prayer. There must be sacrifice, and discipline, and actual change of behavior.

There must be a thorough cleansing, a purification, as so many have lost their way, and in their disorientation, no longer even realize — as the archbishop in Belgium confesses — what they are doing, why they are doing it, or even that it is wrong

And this cleansing must include sacrifice, beyond wishes and prayers.

Our tragedy is that evil has become banal.

(The phrase “banality of evil” was coined by  the Jewish writer Hannah Arendt and incorporated in the title of her 1963 work Eichmann in Jerusalem: A Report on the Banality of Evil. It is the idea that the great evils in history generally, and during the persecution of the Jews during the Second World War in particular, were not executed by fanatics or sociopaths, but rather by ordinary people who accepted the premises of their state and therefore participated with the view that their actions were normal. Explaining this phenomenon, Edward S. Herman has emphasized the importance of “normalizing the unthinkable.” According to him, “doing terrible things in an organized and systematic way rests on ‘normalization.’ This is the process whereby ugly, degrading, murderous, and unspeakable acts become routine and are accepted as ‘the way things are done.'”)

The moral collapse of our time cannot be fought unless the fog of banality is lifted, unless evil is called evil, felt as evil, and fought as evil.

Our age has fallen into this trap: we no longer sense that we are in the grip of evil. We have grown numb.

In one of his books, Walker Percy, the American Catholic novelist who died about 20 years ago, uses an epigram he attributes to Dante. Certain human beings, he says, no longer have a sense of the gravity of sin, and this is a terrible condition, he says. “So low they had fallen that they no longer believed themselves creatures worthy even of being damned.”

In other words, the very worst condition of all is to forget one’s true nature.

There is something even worse for a man than committing abominable crimes. It is to commit such crimes and not to sense that one is damnable

It is to have lost the sense, the belief — the knowledge — that one has dignity…

That one has the dignity of a being who can be held responsible forever, through all time and space unto eternity, for his or her actions.

The first type of being is tragic, but even in his fall, retains a type of terrible greatness.

The second type of being, who has forgotten his or her nature, is no longer tragic, and not even comic, but just insignificant — without significance.

This type of being has no meaning at all.

He or she is like a soap bubble, floating for a moment or two, and then collapsing into a ring of foam which vanishes away.

So the return to a sense of conscience, of a sense of sin — which is necessary before one can even begin to take the road of repentance, which is the road to salvation — cannot begin without an anthropological revelation… without the understanding and belief that a human being has an eternal destiny, an eternal soul.

This is what we have lost.

This is what our age has lost.

And in losing this, we moderns have fallen below the horizon of the damned.

This is the malaise of the modern age. We have lost the eternal horizon of human existence, and, no longer believing ourselves creatures worthy of being damned, we have become trivial, capable of commtting any crime, because it doesn’t really matter anyway, in the vast scheme of things.

And so the road back must pass through a recovery of an anthropology which reveals, argues and proves the true dignity and greatness of what our age, in fact, believes is, in the end, trivial, worthless: human life, human personality, the human soul.

The highest of all possible created things — higher even than the angels, because linked to the very being of God, through Christ, in the Eucharist, when we “become” Him…

Along this road, Pope John Paul tried to give us some signposts, with his emphasis on human dignity, on the dignity of every human being.

And, this teaching of the eternal dignity of man is at the heart of the teaching of Pope Benedict, as I will have occasion to explain in future emails.

But I will note here only one thing: that this may also mean punishment, as Benedict himself noted in his recent book-length interview with German writer Peter Seewald, Light of the World.

There the Pope connected an anti-punishment mentality to the response that some Church officials have had to sexual abuse among clergy.

The awareness that punishment can be an act of love “ceased to exist,” the Pope said. “This led to an odd darkening of the mind, even in very good people.”

Now it is sufficient to wish Benedict a “Happy Birthday” at the end of his 84th year toward heaven, and to wish him many more years, as we need his clarity of vision as we attempt to creep out from the fog of what has become of the spiritual life of our age. Because his insights are startling and profound, and act as a light in the general darkness.