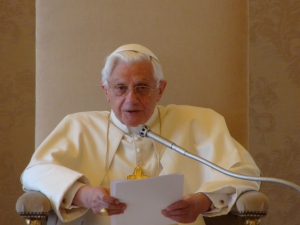 It seems to me particularly important that the theme “The Question of God Today” was chosen this year for the Plenary assembly.Wemust never tire of re-proposing this question, of “recommencing from God,” in order to give back to man the whole of his dimensions, his full dignity. For a mentality that has been spreading in our time, in renouncing all reference to the transcendent, has shown itself unable to understand and safeguard what is human. The spread of this mentality has generated the crisis we are living in today, which is a crisis of meaning and of values, before being an economic and social crisis. The man who seeks to exist only positivistically, in what is calculable and measurable, ends up suffocated.

In this scenario, the question of God is, in a certain sense, “the question of questions.” This brings us back to man’s fundamental questions, to his desire for truth, happiness, and freedominnate in his heart,which seek for realization. The man who reawakens in himself the question of God opens himself to hope, trustworthy hope, which makes it worth his while to take on the effort of journey in the present (cf. Spe Salvi, 1).

How can the question of God be reawakened so as to make it the fundamental question?

Dear friends, if it is true that “being Christian is not the result of an ethical choice or a lofty idea, but the encounter with an event, a Person” ( Deus Caritas Est, 1), the question of God is reawakened by the encounter with those who have the gift of faith, with those who have a vital relationship with the Lord. God is known through men and women who know him–the road to Him passes, concretely, thorough those who have met Him. Here your role as lay faithful is particularly important. […] You are called to offer a transparent witness of the relevance of the question of God in all fields of thought and action. In the family, in work, in politics, and in economics, contemporary man needs to see with his own eyes and touch with his own hands how, with God or without God, everything changes.

But the challenge of a mentality closed to transcendence obliges even Christians themselves to return in a more decisive way to the centrality of God. At times, efforts have been made to make the presence of Christians in social, political and economic affairs more incisive, but perhaps there was not the same concern for the solidity of their faith, as if it were something acquired once and for all. In fact, Christians do not live on a far away planet, immune from the world’s “ills,” but share the unrest, the disorientation and the difficulties of their time. So it is no less urgent to re-propose the question of God even within the Church itself. How many times, though defining themselves as Christians, people do not have God as the central reference point for their way of thinking and acting, in the fundamental choices of life. So the first answer to the great challenge of our time lies in the profound conversion of our hearts, so that the Baptism that has made us light of the world and salt of the earth may truly transform us.