Trending Now
You are at:Home»Featured»Pope Denounces Moral Relativism on Korea Trip
By Hilary White on August 20, 2014 Featured, Live in Christ 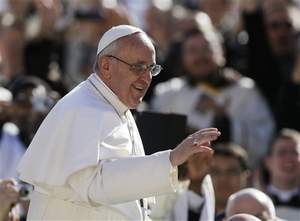 Pope Francis denounced the trend of moral relativism during a meeting on Sunday with Catholic bishops from Korea and around Asia. Christians must avoid the temptation “to compromise our faith, to water down the radical demands of the Gospel and to conform to the spirit of this age,” the pope said.

He said that dialogue is “an essential part of the mission of the Church in Asia” but added that it is impossible unless we are “clear about what we are.”

“The spirit of the world,” he said, tempts us with “the deceptive light of relativism, which obscures the splendor of truth and, shaking the earth beneath our feet, pushes us toward the shifting sands of confusion and despair.”

“It is our living faith in Christ which is our deepest identity; it is from this that our dialogue begins, and this that we are asked to share, sincerely, honestly and without pretence, in the dialogue of everyday life, in the dialogue of charity, and in those more formal opportunities which may present themselves,” the Pope told the representatives of the Federation of Asian Bishops Conferences (FABC), assembled for the occasion at the Haemi shrine in Daejeon Diocese, South Korea.

He warned against not only formal, philosophical relativism, but the “everyday practical relativism which almost imperceptibly saps our ?sense of identity.”

The remarks to the Asian bishops followed a brief, solemn visit by the pope to a symbolic “cemetery” for victims of abortion on Saturday where he prayed silently in a field of hundreds of white crosses. While the abortion law in South Korea restricts it to cases of pregnancy due to rape or incest or where the child is thought to have a “severe” genetic disorder, the abortion rate in the country is thought to be one of the highest in the world.

Korean health authorities estimate the abortion rate to be about 340,000 per year, out of a population of about 50 million, though this number does not take into account abortions on unmarried women. The Korean total fertility rate remains one of the lowest in the world at about 1.25 children born per woman.

Also on Saturday, in a ceremony attended by about 800,000 people, Pope Francis beatified 124 Korean martyrs who died in a wave of persecution in the 18th century, in which the Vatican estimates about 10,000 were killed.

In a possible reference to the ongoing violence against Christians and other minorities in Iraq at the hands of Islamist militants, Pope Francis said, “They knew the cost of discipleship … and were willing to make great sacrifices.”

“They challenge us to think about what, if anything, we ourselves would be willing to die for,” Francis said.

During his trip, his first to any Asian country, Pope Francis emphasized the need for “reconciliation” and called repeatedly for “peace” between the two Korean countries.

At the 6th Asian Youth Day, Francis said, “There is only one Korea, but this family is divided.”