Trending Now
You are at:Home»Featured»Pope Francis, Mary and the Urbi et Orbi
By Fr. Edward Looney on March 15, 2013 Featured, Live in Christ 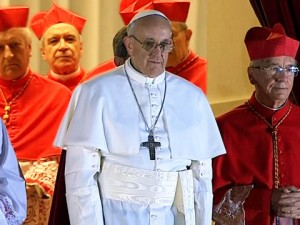 Pope Francis in his initial remarks following his papal election led those gathered at the Vatican and those watching on television or online, and listening via radio in a prayer for Pope Emeritus Benedict XVI, asking the Lord to bless him and Our Lady to protect him.  The prayers he led were traditional prayers, the Our Father, Hail Mary, and Glory Be.

After the blessing, Pope Francis shared that tomorrow he wanted to go and pray to the Madonna, that she would protect Rome.

Pope Francis has followed his successors by calling upon the intercession of the Virgin Mary.  It is interesting to note that in the English translations thus far, he specifically addressed Mary’s protective role.  He wanted us to ask Our Lady to protect Pope Emeritus Benedict XVI, and he wants to go and pray to the Madonna that she would protect Rome.

Mary has often been hailed as a protectress.  For example, she is often invoked as the protectress of the unborn and the protectress of the faith.  Of a more interesting note, in Rome the Basilica of Santa Maria Maggiore is home to the Shrine of Our Lady Protectress of Rome.  Furthermore, by wanting to go and pray to the Madonna, Pope Francis acknowledges the importance of pilgrimages, in this case, Marian pilgrimages.  Given that he wants to ask Mary to protect Rome, it may be fitting for him to pray at Santa Maria Maggiore.

My new blog, Mary and the Pope, over the next several years of Pope Francis’ papacy will chronicle and analyze the Marian references and devotion of Pope Francis.  Be assured that if and when Pope Francis makes a pilgrimage to invoke Mary’s intercession, I will cover it.

Now that we know who our new Holy Father is, I will begin researching the Mariology of Pope Francis as Cardinal Bergoglio.