Trending Now
You are at:Home»Featured»Pope in Mexico Tells Church Not to ‘Rest on Its Laurels’
By ACN-USA News on February 19, 2016 Featured, Those in Need 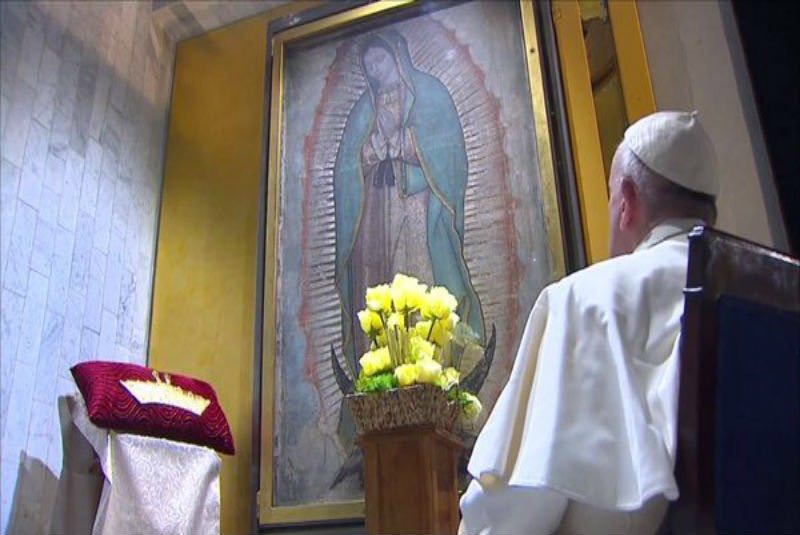 Pope Francis prays to Our Lady of Guadalupe; ACN photo

MEXICO CITY—During his visit to Mexico, Pope Francis has expressed his concern for people’s social problems, pain and suffering, and he has shared optimistic messages of hope and comfort. His smile graces all his language and his expressions of love permanently underscore his words.

“The tears of those who suffer do not go unseen,” he said, while showing concern about “children and displaced persons.” He invites the faithful to be, like St. Juan Diego, the ambassadors of the Virgin of Guadalupe, through deeds of mercy, and being true to the Gospel of the Beatitudes.

The Holy Father expressed his concern about aimless youth, especially when noting that young people are Mexico’s greatest asset. He spoke words of comfort for the neglected elderly and at all times highlighted mercy as a Christian duty.

Putting his words into action, he visited children with cancer and said that sometimes a single caress helps them recover.

Aid to the Church in Need (ACN), an international papal charity, is in close harmony with all of Pope Francis’s initiatives. Through social networks and standard media, the ACN echoes all his words and attitudes, aware that the Church “should not rest on its laurels” and must fulfill its mission.

Mexico’s indigenous population has featured in his speeches since his very first day in the country. The Pope calls for a recognition of their contributions, which are many, in building a pluralistic and prosperous nation, brimming with potential. The Pope would like to see a Mexico that is a land of opportunity for all, so people don’t have to leave their homeland in search of a better life. The issue of migration — not only in Mexico but in the world — is therefore present in his words and his heart as he calls for solidarity and mercy at all times.

The Pope also warned that people should avoid three common temptations: ill-gotten wealth (from drug trafficking, corruption and other causes), the vanity of placing ourselves above the rest and pride — three temptations which Christ also faced in the wilderness. The Pope noted that Jesus did not even reply to any of these temptations—because one should not dialogue with the devil.

The Holy Father’s message no doubt touched the hearts of many people going through various circumstances. Today he reminds us that he comes as a missionary of Mercy and Peace — a peace that Mexico cries out for in the midst of so much violence, injustice and inequality.

Pope Francis invites all Mexicans to be a Church that is the voice and hope for building a different world of opportunity for all.

Julieta Appendini is the director of ACN Mexico