Trending Now
You are at:Home»Featured»Pope Paul VI and Humanae Vitae: I Told You So
By Jennifer Brinker on February 10, 2012 Featured, Life Issues & Bioethics 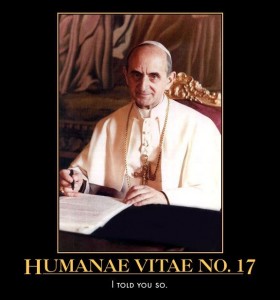 The image has spread rapidly around social media networks: It’s a photo of Pope Paul VI, and in the likeness of those popular inspirational posters, includes the saying, “Humanae Vitae No. 17: I told you so.”

It’s a humorous but stark nod to a reality that Catholic Americans are facing today: a slow, but sure dissolution of freedom of religion, this time through forcing artificial contraception upon Catholic institutions.

In his 1968 encyclical “Humanae Vitae,” Pope Paul VI waxed prophetic of the consequences of artificial contraception — the same contraception that the current federal administration wants to force Catholic institutions to provide in health care plans. This mandate includes drugs that produce abortions, as well as sterilization procedures.

“Careful consideration should be given to the danger of this power passing into the hands of those public authorities who care little for the precepts of the moral law. Who will blame a government which in its attempt to resolve the problems affecting an entire country resorts to the same measures as are regarded as lawful by married people in the solution of a particular family difficulty? Who will prevent public authorities from favoring those contraceptive methods which they consider more effective? Should they regard this as necessary, they may even impose their use on everyone.”

Most Catholics have a pretty clear understanding that the Church teaches artificial contraception is an intrinsic evil — yes, a sin. But many — as evidenced through numerous studies that show a majority of Catholics still use contraception — either don’t fully understand or appreciate the Church’s teaching.

Here are a few reasons why the Church teaches against contraceptives:

In “Humanae Vitae,” Pope Paul VI wrote, “The Church, nevertheless, in urging men to the observance of the precepts of the natural law, which it interprets by its constant doctrine, teaches that each and every marital act must of necessity retain its intrinsic relationship to the procreation of human life.”

“This particular doctrine, often expounded by the magisterium of the Church, is based on the inseparable connection, established by God, which man on his own initiative may not break, between the unitive significance and the procreative significance which are both inherent to the marriage act.

“The reason is that the fundamental nature of the marriage act, while uniting husband and wife in the closest intimacy, also renders them capable of generating new life — and this as a result of laws written into the actual nature of man and of woman. And if each of these essential qualities, the unitive and the procreative, is preserved, the use of marriage fully retains its sense of true mutual love and its ordination to the supreme responsibility of parenthood to which man is called.” (No. 11 and 12)

2. The birth control pill is an abortifacient

While the Church repeatedly has noted that the birth control pill has the ability to act as an abortifacient, members of the medical community also have spoken to that reality.

As an abortifacient, the pill has the ability to prevent a human embryo from implanting in a uterus. Yes, that means it’s an abortion.

3. Contraceptives do not solve our problems

In the secular world, it’s been touted time and time again that contraception will lower unintended pregnancies, reduce abortions and even benefit marriages.

In fact it’s done just the opposite, as Pope Paul VI warned:

“Responsible men can become more deeply convinced of the truth of the doctrine laid down by the Church on this issue if they reflect on the consequences of methods and plans for artificial birth control. Let them first consider how easily this course of action could open wide the way for marital infidelity and a general lowering of moral standards.”

He went on to say that any man who “grows accustomed to the use of contraceptive methods may forget the reverence due to a woman, and, disregarding her physical and emotional equilibrium, reduce her to being a mere instrument for the satisfaction of his own desires, no longer considering her as his partner whom he should surround with care and affection.”

A 2011 Guttmacher Institute fact sheet states that nearly half of all pregnancies among American women are unintended. Four in 10 of those are terminated through abortion. And 54 percent of women who have had abortions had used contraception during the month they became pregnant.

Paul VI sure told us so, didn’t he?

This article courtesy of the St. Louis Review.