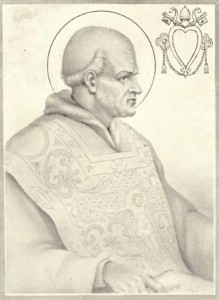 St. John held the office of Vicar of Christ from 523-526 when he was martyred at the behest of Theodoric. His official journey to Constantinople was successful in making peace at a time when Arianism had again reared its heretical head, and had created dissension between the Latin and Greek churches. The Byzantine Emperor, Justin, received the Pope submissively and moderated his excessively harsh decrees against the heretics. Theodoric was incensed to see his co-Arians setback, and had the Pope imprisoned upon his return to Italy. St. John died of his privations and of exhaustion in the prison at Ravenna.

For a more detailed analysis of our Saint’s life, see the Catholic Encyclopedia.