Trending Now
You are at:Home»Featured»Porn Not the Only Industry Commodifying Women
By Chelsea Zimmerman on April 24, 2012 Featured, Reproductive Technology 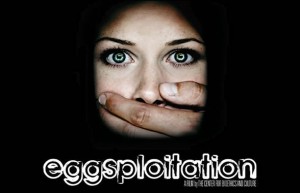 We’re all well aware of the fact that the “adult entertainment” industry rakes in major profits by exploiting women and their bodies, but they aren’t the only ones. Recently, Rebecca Taylor explained how the cloning/embryonic stem cell research industry is dependent on women putting their bodies on the line in order to obtain the “raw materials” needed for their experimentation.

The same thing can also be said of the rich and politically powerful fertility industry. In fact, the Center for Bioethics and Culture recently filmed a documentary all about how this industry exploits women, treating them as banks of harvestable biological material and often not fully disclosing the risks involved with the process.

“Donating” eggs is not like “donating” sperm. It involves heavy doses of hormone injections, not to mention minor surgery requiring general anesthesia (although, writing for the Atlantic last week, Catherine Lacey, notes that the agency through which she made multiple “donations” always referred to the procedure by which her eggs were removed “as a ‘retrieval,’ never ‘surgery.’”). Besides the health risks involved in this process (which includes infertility and Ovarian hyperstimulation syndrome), after reading Catherine’s description of it, it also just sounds like an incredibly unpleasant experience.

The Daily Mail reported recently that the UK has experienced a “chronic shortage” of egg donors for the past few years, with some IVF clinics having to put couples on a four year waiting list. Not surprisingly, the Human Fertilization and Embryology Authority wasn’t happy with this trend and has responded to the shortage by, what else, sweetening the deal for potential egg donors. Last month payment for eggs in the UK rose by £550 per cycle. The result has been a five-fold jump in egg donors. Imagine that! Oh, but don’t worry. According to Dr. Gillian Lockwood of Midland Fertility Services: “Early counseling sessions would quickly identify women who were doing it purely for the money.” I’m sure.

The commodification of women by the fertility industry doesn’t stop with harvesting eggs.  Surrogacy is a booming business in India where impoverished women are recruited to be “gestational carriers” for middle-to-upper-class Western women. Surrogacy is not exclusive to India. In recent years, it has been popularized here in the U.S. by celebrities like Sarah Jessica Parker, Elton John, Neil Patrick Harris and Nicole Kidman.  According to a recent ABC News story, many U.S. military wives are becoming surrogate mothers to supplement their husbands’ meagre wages – and your tax dollars might be paying their pre-natal and hospital bills.

Often, these women, especially in India, are seen as ‘just the wombs‘, but it’s not just their wombs. Pregnancy is more than being a human incubator for nine months, it affects a woman’s entire body, both physically and emotionally, before and after birth. To make matters even worse, surrogates may be pressured into having an abortion if tests show that the unborn children they are carrying are less than perfect.

The baby-making industry is a global market that makes many people very rich at the exploitation of others.** Yet, because of feel-good narratives offered by celebrities and others, it has been widely accepted with little to no criticism. In fact, it has become so mainstream that it’s even being used to help people without any major fertility problems reproduce. This is not how children should come into the world and this is certainly not how women should be viewed or treated, whether they allow it themselves or not. A woman’s body is a sacred, life-giving vessel, not a baby factory or a hardware store for spare baby-making parts.

————————-
**I should add that women are not the only one’s commodified by this industry. Besides the children that are created, of course, men, too, are used for their sperm just as much as women are for their eggs and wombs.