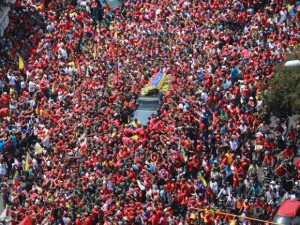 The gushing, almost angelic praise for Hugo Chavez by the left in America and around the world has been shocking to behold, but hardly surprising. I will not bother repeating the litany here. Rather, I’d like to focus on another surreal aspect of Chavez’s death—namely, the rush to preserve and display his body, so the faithful may pilgrimage and pay homage for decades to come.

Here again, I’m sadly not surprised. The far left has never been shy about venerating its heroes. This is supremely ironic, given that many of the subjects of veneration, as well as those doing the venerating, were not merely agnostics and atheists but militantly so. Recent examples include Asian communists Mao Tse-Tung and Ho Chi Minh, but the best example remains Vladimir Lenin.

Upon his death in January 1924, Lenin’s body was embalmed and preserved in a tomb, actually a shrine, in Red Square, whereby the faithful could forever honor the Great One. Etched in the marble holding the Bolshevik godfather’s body is this inscription: “Lenin: The Savior of the World.”

For an atheist state angrily committed to a war on religion, this would seem odd. In fact, however, it is precisely what we came to expect from communist regimes. In short order after Lenin’s death, poems and songs were written in praise of the “eternal” Lenin who “is always with us.” Yuri Gagarin, the first Soviet cosmonaut, visited Lenin’s mausoleum immediately before his flight so he could meditate over Lenin’s rotting flesh and draw strength for his mission. Later, Gagarin returned to the sacred site to report to Lenin on his mission.

The “Leninization” of the Soviet state’s spiritual life quickly took flight. Throughout the USSR, “Lenin Corners” were established, modeled on the Icon Corners of the Russian Orthodox Church. These mini-shrines included icon-like paintings of Lenin along with his words and writings.

A “secular religion” was established, one that, as noted by Dmitri Volkogonov, Lenin’s biographer, demanded “unquestioning obedience” from its disciples. So certain was the Party of Lenin’s infallibility that in 1925, one year after his death, the Politburo established a special laboratory to remove, dissect, and study Lenin’s inactive brain. The purpose, said Volkogonov, was to show the world that the man’s great, infallible ideas had been hatched from an almost supernatural mind.

This nonsense (if not blasphemy) continued for decades. Just ask any former Soviet citizen who suffered through the extended nightmare. A Ukrainian citizen, Olena Doviskaya, once told me: “Everywhere you went, there were statues everywhere of Lenin. They wanted you to worship Lenin.”

Most curious about this Lenin reverence and mysticism is the fact that Lenin himself considered any worship of a divinity an outrage. Lenin blasted the notion of “god-building.” He thought the most horribly unimaginable things about religion, calling religion “abominable” and “a necrophilia.” A vicious, hateful man, Lenin might have hastily shot those responsible for deifying him.

Nonetheless, communists and certain elements of the far left have engaged in such behavior for a long time, readily placing their faith in (leftist) men and replacing traditional religion—Christianity, Judaism, Buddhism, Islam, etc.—with a Marxism or socialism that they essentially treat as a religion. Brian Lowe of the University of Virginia notes that in the Soviet system, Marx was the Messiah, the Party was the Church, the Proletariat was the Elect, the Revolution was the Second Coming, and more. The Communist Manifesto was accorded a level of sanctity approaching Holy Scripture. Marx and Lenin and Stalin were deemed other-worldly.

All of which brings me back to Hugo Chavez and his enshrinement—and its paradoxes.

Chavez comes from a Roman Catholic country, whereas Lenin came from a Russian Orthodox country. In both the Roman Catholic and Russian Orthodox traditions, suspected saints—people who lived uniquely holy lives—have been placed in special tombs for purposes of veneration and to see if their dead body is ultimately incorruptible, divinely protected on earth even in death.

The Bolsheviks turned this upside down. They created atheist museums where dead priests/saints were displayed with worm-holes and other decay. They attempted to pose this in contrast to Lenin’s incorruptibility, even as the jaundiced Lenin consistently required removal and re-embalming and re-waxing.

And so, is the left currently in the process of enshrining Hugo Chavez’s body as a form of saintly veneration? Will he become a symbol of the left’s sacred cows of collectivism, wealth redistribution, and nationalization?

Don’t ever let anyone tell you that secular/atheistic progressives and socialists don’t have saints and martyrs. They’re every bit as faithful as the most Bible-thumping fundamentalist. And with the death and preservation of Hugo Chavez, they might be preparing themselves a new saint.

[Editor’s note: A version of this article first appeared at American Spectator.]