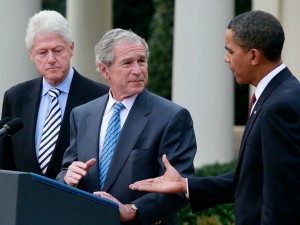 We hadn’t seen two numbers reported since Pres. Bill Clinton’s poll numbers plummeted: the intervening presidency was held by a Republican, to whom no special consideration would be afforded by the Democrats running mainstream media.

The first incidence I’ve seen of an Obama Poll Twofer arrived on Saturday the 25th:

The poll showed that President Obama’s likability had increased by nine percent since the end of the government shutdown in October. Fifty-eight percent of Americans now view the president as very or somewhat likeable. The good news for the president does not extend to his policies however. The poll shows that the view of the president is slipping even among Democrats and liberals. The percentage of Americans who view Obama as outstanding or above average has declined by six points since he was reelected in November 2012. Thirty-one percent now view Obama’s presidency as outstanding or above average while 42 percent see it as below average or poor.

That take was preceded, on Jan. 23rd, by this AP article:

Nice guy, so-so president. Taking stock of President Barack Obama at the five-year mark in his term, less than a third of Americans consider him to be an above-average chief executive. Nearly twice as many find him likable.

Will this bifurcation — the likes of which was never afforded to Pres. George W. Bush when his poll numbers sank — will it continue? Only if Obama’s fellow Democrats in mainstream media think they need to help to blunt the impact of his poll numbers on their political party’s electoral prospects.