Trending Now
You are at:Home»Featured»Pro-Life Provisions In Hungarian Constitution Shock EU
By Colin Mason on May 9, 2011 Featured, Life Issues & Bioethics 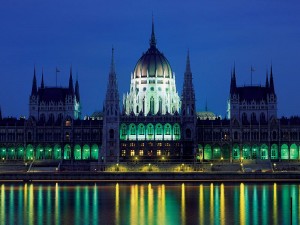 I was praying before the tomb of the great Cardinal Mindszenty in his cathedral at Esztergom, when I heard the news that his beloved Hungary had passed a new, pro-life constitution. The Cardinal, who took sanctuary in the U.S. Embassy for 16 years after Soviet troops crushed the Hungarian Uprising of 1956, would be proud. — Steven Mosher

In a move that has shocked the European Union and drawn heavy fire from pro-choice and homosexual activist groups around the world, Hungary approved a new constitution that bans gay marriage, and protects human life from the moment of conception.

Approved on April 18th, the document also makes across-the-board changes to the Hungarian political structure, including financial reforms intended to address the country’s ballooning deficits. According to Hungarian officials, this constitution is designed to be the final step in moving the former Soviet bloc country away from the old communist ways of doing things.

“We’ve just participated in a historical moment,” parliamentary speaker Laszlo Kover said to the Associated Press. “The new constitution is built upon our past and traditions, but seeks and contains answers to current problems while keeping an eye on the future.”

Questions have been raised about some of the constitution’s provisions. Some have criticized a provision that allows the dissolution of parliament if a budget is not passed on time, but in an era of ballooning deficits, this may be just what is needed to achieve fiscal restraint. (Certainly the U.S. Congress would be forced to seriously address our own fiscal problems if their failure to do so would put them immediately before the electorate in a special election!)

Carlos Beltramo, PRI’s correspondent in Spain, says that the new constitution also gives the government a tighter grip on the mass media and reduces the power of the Constitutional Court, Hungary’s equivalent to the Supreme Court. These aspects of the new constitution, he notes, may raise legitimate concerns about possible infringements on civil liberties and create other problems down the road.

What is drawing the most attention from the media, however, is the fear-mongering of pro-choice and pro-homosexual groups, whose only reason for bashing the new constitution is that it protects life and marriage.

The Hungarian LGBT Alliance, for example, urged the president “not to sign the new Constitution into law, and to give a new opportunity to the Parliament to adopt a truly modern, European constitution … instead of a political pamphlet motivated by homophobic prejudices.”

Human Rights Watch, which has become stridently pro-abortion over the past few years, has leveled criticism against the new constitution as well, fretting that (among other things) its pro-life clauses might “lead to efforts to overturn Hungary’s abortion law and result in restrictions on abortion that would put a number of fundamental rights for women at stake.”

We at PRI sincerely hope that the worst fears of this pro-abortion organization are realized, and that the new constitution will provide the legal basis for restricting, if not banning entirely, abortions in dying Hungary. We concur with Beltramo that, while the new constitution may not be perfect, it is “the best on the European continent right now.”

As far as the constitution’s other issues are concerned, Beltramo holds that, since Hungary is now recognizing basic rights like the right to life and the right to marriage, that they “can handle these other matters over time and without jeopardizing fundamental democratic principles.”

Which is why we at PRI applaud Hungary’s efforts. While the new constitution may not be perfect, the fundamentals of a free and just society—the right to life and the protection of marriage—are now in place.

We now hope and pray that they continue to build upon these principles and create a society where all Hungarians are welcomed into the world and raised in natural families.