Trending Now
You are at:Home»Featured»Profession of Vows: Wildflower in the Pages of an Ancient Book
By Sr. Theresa Aletheia Noble on September 16, 2014 Featured, Live in Christ, Vocations 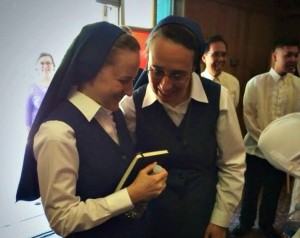 I made my first vows of poverty, chastity and obedience on August 30, 2014.

Visibly not much has changed. The biggest change is the veil I am wearing now. It has cleared up a lot of confusion. When I walk down the street, people now look at me and usually know what I am. In my novice outfit, people could rarely figure me out. At various times I was mistaken for being Jewish, Amish, Mormon, and a member of hotel staff.

These days people usually look at me curiously for just a few moments, then quickly avert their eyes before I have the chance to do a jig and yell, “I love Jesus!” in their face.

I spent a lot of time thinking about the outward changes involved in making vows and how they would affect my life. But really, the biggest change is interior.

I prepared for four years to make vows. I took classes, discussed the vows, observed other sisters living the vows, discerned my ability to live the vows. But none of these things adequately prepared me for this covenant with God. What can really prepare a person to vow their life to the Creator of the Universe?

It is hard to describe in a concrete way how my interior life is different after making vows to God to live chastity, poverty and obedience in imitation of the way Jesus lived on earth. The only way I have been able to describe it to myself is that I now feel that I have stepped more deeply into the mystery of God. I feel like a small piece of metal that voluntarily dove into the magnetic field of the strongest magnet on earth. It is as if my vows pressed my soul upon God like a small wildflower between the thick pages of an ancient book.

I am still overwhelmed by the mystery of what I have done.

In the Daughters of St. Paul, we usually keep our baptismal name and add another name. My chosen name is Aletheia, the Greek word for truth. It has caused some confusion and incited a litany of misspellings and mispronunciations, (although I was assured that pretty much any way you can pronounce the name is a way the name has been pronounced at some point in the history of the Greek language). If you are interested, you can go to the link above and hear the way I pronounce it.

But in the end, I am not really concerned about all that. The name chose me a long time ago and regardless of the impracticality and confusion I love it.

Because the New Testament is written in Greek. St. Paul spoke and wrote in Greek. His mission was to the Gentiles. In the same way, I see my mission in the Church as one that is to everyone; it is beyond the walls of the Roman Catholic Church and extends to other Christians, people of other religions and nonbelievers. I believe the Greek word for truth communicates my identity as the daughter of the Apostle to the Gentiles and heir of his universal mission.

Because God is Truth. Jesus is the Way, the Truth and the Life. Throughout my life, even when I was an atheist, I believed in truth, I thirsted for truth and wanted to live for truth. Little did I know that Truth is a person and he is Jesus. The entire time I sought truth, he was right there beside me, inviting me and guiding me back to him.

Also, God approaches me through my mind. He helps me to understand the complexities of a world that is impossible to understand without him. But at the same time that he respects my intelligence and my ability to reason, he also overwhelms my grasp of the truth with his overwhelming, all-encompassing Truth. I have been seduced by the mystery of God’s Truth.

In the Gospel of John, Jesus prays in the high priestly prayer saying, “Consecrate them in the truth. Your word is truth. As you sent me into the world, so I sent them into the world. And I consecrate myself for them, so that they also may be consecrated in truth” (Jn 17:17-19).

I wish you all could have been at my profession. For those of you who would have liked to have been there or would like to feel that you were there, here are some of the highlights:

*If any of the videos are not working, try accessing them directly on the Daughters of St Paul website.
Thank you everyone for your prayers and love, my commitment is not possible without you!

Oh and one more announcement, I have been stationed in Miami, FL and will be helping at the Pauline Books and Media bookcenter there, known in Miami as Paulinas Libreria. I will be practicing my Spanish, eating a lot of pastelitos and drinking copious amounts of cafe cubano, so if you are in the area, come say hello to me at our bookcenter and buy some fabulous Catholic books!