Trending Now
You are at:Home»Featured»Promoting the Angelus as an Advent Devotion
By Fr. Edward Looney on December 1, 2014 Featured, Live in Christ, MyChurchParish.com 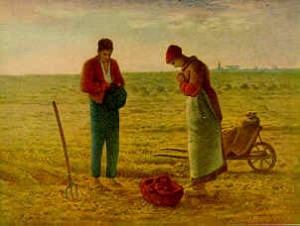 Farmers pause in their fields at midday and bow their heads in prayer. [i]Businessmen and women overhear the ringing bells during their lunch break in the downtown business district. And neighbors to Catholic Churches may hear the church bells toll at six, noon, and six as an invitation to pray the traditional devotion of the Angelus in which the faithful lift their mind and heart to God while recalling the incarnation and paschal mystery.

Spanning various religious traditions, it is customary for faith traditions to have different sets of prayers that are commonly prayed throughout the day. For Catholics, communities of monks and sisters, in addition to diocesan priests and the laity pray the Liturgy of the Hours at least five times each day. This prayer is undertaken on behalf of and for the people of God. Those of the Jewish faith pray three times daily and Muslims turn toward Mecca and pray five times every day. This rhythm of prayer marks a religious believer, despite the different faith traditions.

In recent years lay Catholics have rediscovered the Liturgy of the Hours, and have begun to recite it more often. Mirrored on the liturgical prayer of the Church, the traditional Catholic prayer of the Angelus helps one to recall God’s presence in their life by its daily recitation. As Christmas draws near, the Church will once again begin its observance of preparation through the holy season of Advent. Paul VI in his apostolic exhortation, Marialis Cultus, speaks of the specific Marian dimension of the Advent season. In my own reflection on the Angelus, I have concluded that this Marian devotion is appropriate for the season of Advent.

The Season of Advent is a time of preparation for Christ’s coming among us as a child. . Each time we pray the Angelus we recall the events leading up to the incarnation by meditation on the events of the Annunciation. “The Angel of the Lord declared unto Mary, and she conceived by the Holy Spirit. Hail Mary… Behold the Handmaid of the Lord, be it done unto me according to thy Word. Hail Mary…” We call to mind the reality that the Angel Gabriel appeared to Mary, and told her she would conceive by the Holy Spirit. Fittingly, we then recite the Hail Mary, the same greeting of the angel to Mary—Hail, Full of Grace, the Lord is with Thee.

The second verse recalls Mary’s response to the Lord’s will—be it done unto me according to thy word. As we pray the words of Mary we express our desire to imitate her virtue. We desire to be disposed to the will of God as she was. We will probably never receive our vocation in life through similar events; nevertheless, we can pray to be open to the will of God in our lives, just as Mary was.

The third strophe of the Angelus, “And the Word was made flesh, and dwelt among us” causes us to reflect on the reality that Christ became Man and was born of the Virgin Mary. When I was taught the Angelus many years ago, I was taught to genuflect at that point of the prayer. These words come from the prologue of St. John’s gospel, which in the extraordinary form, is known as “The Last Gospel.” When these words are read, those at the liturgy genuflect at those words.

In the Nicene Creed or Profession of Faith prayed during the Sunday liturgy, the faithful are instructed to bow at the words “and by the Holy Spirit was incarnate of the Virgin Mary and became man.” In the Extraordinary Form, the Faithful genuflect. When we make this gesture of bowing we acknowledge the importance of the incarnation, that there is something special and unique—deserving of reverence. Similarly, whenever we pass by the altar we bow as a sign of reverence for Christ’s presence. There are, however, two occasions during the liturgical year that instead of bowing we genuflect at that point during the creed: the Annunciation and Christmas. We genuflect because of the intimate connection of the incarnation with those feast days, that Christ literally and truly became man. In summary, praying the Angelus during the Advent Seasons allows us to anticipate the liturgical action of genuflection during the Christmas liturgy.

At the end of the Angelus we invoke Mary’s special intercession as we ask: “Pray for us, O most holy Mother of God, that we may be made worthy of the promises of Christ.” We continue by a special closing prayer:

Let us Pray: Pour forth, we beseech Thee, O Lord, Thy grace into our hearts, that we to whom the Incarnation of Christ Thy Son was made known by the message of an angel, may by His Passion and Cross be brought to the glory of His Resurrection. Through the same Christ Our Lord. Amen.

Similar to our liturgical action of genuflecting during the third strophe of the Angelus, the closing prayer also has a connection to the liturgy. This prayer is the collect or opening prayer for the Fourth Sunday of Advent. The inclusion of this prayer within the liturgy of Advent acknowledges the forthcoming celebration of Christmas, because the Incarnation of Christ has indeed been made known to us by the message of an angel. We beseech the Lord to bestow his grace within our hearts because of Christ’s incarnation, and we acknowledge the graces we will receive from our participation in the Eucharistic celebration. During the same liturgy the priest prays over the gifts, “May the Holy Spirit, O Lord, sanctify these gifts laid upon your altar just as he filled with his power the womb of the Blessed Virgin Mary. Through Christ our Lord.” Just as Mary conceived by the Holy Spirit and the Word was made flesh, the same Word now becomes present again by the power of the Holy Spirit on the altar of sacrifice.

The Angelus prayer is fitting for the season of Advent because it prepares us for the feast of Christmas by recalling the event of the Annunciation. The Angelus can be understood as a semi-liturgical prayer, as it calls the faithful to prayer as specific times throughout the day. Additional the liturgical action of genuflection and closing collect are intimately connected with the season of Advent and the feast of Christmas. By no means is the Angelus limited to the Advent and Christmas Season because the Church recommends it recitation throughout the year with the exclusion of the Easter season. During the season of Easter, the Church invites the faithful to pray the Regina Coeli, a prayer to Mary in which we rejoice because the Lord has risen as he promised.

The Angelus is appropriate for the season of Lent as we reflect on the incarnation as part of the paschal mystery. In the closing prayer we acknowledge the connection of Christ’s incarnation with the Passion, the Cross and the Resurrection. Christmas morning paved the way for Christ’s salvific death on the Cross and his defeat of death by his Resurrection and Ascension. Because of the incarnation we ask that we too may be brought to the glory of the resurrection. During the season of Lent we can use the incarnation as a means of preparation for the saving work of Christ. Lastly, during Ordinary time, the Angelus affords us the opportunity to keep before our eyes of faith the joy of Christmas the paschal mystery.

Many people share with me they wish they could have a deeper love for Mary. Maybe you have wished to deepen your devotion to the Mother of God by trying to pray the rosary daily. The daily rosary is a noble endeavor but we can often become discouraged if we fail in our commitment. Consider implementing a Marian devotion in your life through small baby steps. During the season of Advent, consider praying the Angelus three times each day, at breakfast, lunch, and dinner, as a means to prepare for Christmas morning.

As a Christian community, let us wait with holy longing for the coming of the Christ-child in the manger on Christmas morning. Our devotion to Mary through the Angelus helps us to remember the joy that she must have experienced in her life knowing that she was going to give birth to the Son of God. Yes, Mary was probably intimidated, but she disposed her will to the will of God when she said, “Behold I am the handmaid of the Lord, be it done unto me according to thy word.” This Advent let us keep the joy of Christmas before our eyes by pausing three times each day and invoking the intercession of the most holy Mother of God.

i The most famous depiction of this is Jean Franciois Millet’s painting, “The Angelus.”