Trending Now
You are at:Home»Featured»Pursuing Mercy
By Mike Eisenbath on August 9, 2014 Featured, Live in Christ 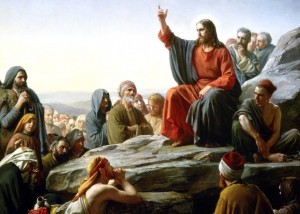 Not everyone reads the Bible. And even though many people who attend a church that is based in the Bible have beliefs that proceed from the “Good Book,” they don’t all adhere to 100 percent of those words – and perhaps don’t even know what is inside the book.

Chances are they know the “highlights:” That Jesus, the Son of God, was sent to suffer and die for our sins, then rose from the dead to open the possibility of eternal life in Heaven for all who repent, believe and try to live in His footsteps.

What does “living in His footsteps” mean?

You can find plenty of instruction in the Old Testament. And Jesus addressed that throughout the four Gospels. But if you are looking for a quick lesson, check out the Gospel of Matthew, Chapter 5, verses 3-12:

The Eight Beatitudes, from the Sermon on the Mount.

I thought about those teachings today when the word mercy started rolling around in my brain. And I played my frequent game of trying to understand the word a little better, in my life and in my world. Because it is so prominent in our hope to understand God, His relationship with us and the kind of people He wants us to be, we need to see how we can pursue mercy.

Some definitions of “mercy” from the dictionary include:

* Compassionate treatment of an offender or adversary; clemency.

* Compassionate treatment of the unfortunate and helpless; sometimes, favor, beneficence.

* Disposition to exercise compassion or favor; pity; compassion; willingness to spare or to help.

* A blessing regarded as a manifestation of compassion or favor.

One source I found said the English word for “mercy” is found in a common translation of the Bible 341 times. There are four different Hebrew words and three Greek words that translate as “mercy,” some of which can be translated as kindness, loving kindness, goodness, favor, compassion and pity; those words appear a total of 454 times.

We are told frequently that mercy is one of the most special qualities of God as He relates to man – and that we are supposed to imitate God in that way. Most pointedly: “You have been told, O mortal, what is good, and what the LORD requires of you: Only to act justly and to love mercy, and to walk humbly with your God.” (Micah 6:8)

I think of all the times I have attended Mass and begged God to have mercy on me, to forgive me for all I have done to offend Him and hurt others. I remember all the times I have confessed my sins and prayed God would be merciful enough to absolve me of those transgressions. I don’t deserve any of that, I promise you.

“You cannot conceive, nor can I,” novelist Graham Greene said, “of the appalling strangeness of the mercy of God.”

Beyond that, I think of some of the people in need of God’s mercy:

As God’s Divine Providence would have it, I ran across the following in some of my prayer reading today. I usually wouldn’t run such a substantial writing from someone else, but in this case it says things better than I ever could. It is taken from a sermon given by French bishop St. Caesarius of Arles, who lived in the late fifth century to early sixth century:

“Mercy” is a beautiful word: more beautiful still is the thing itself. All men wish to receive it, but the worst thing is that not all of them behave in a way that deserves it. Although everyone wishes to be shown mercy only a few wish to show it.O man, how can you have the effrontery to ask for what you refuse to give to others? You must show mercy in this world if you want to receive mercy in heaven. … For there is mercy in heaven and we come to it through earthly mercies. As Scripture says: Lord, your mercy is in heaven.

So there is earthly and heavenly mercy: that is, human and divine. … What is divine mercy? Without doubt, to grant forgiveness of sins. Whatever human mercy gives away on the journey, divine mercy pays back when we arrive at last in our native land. … As He Himself has said: ‘As much as you have done for the least of these, you have done it for me.’ What God deigns to give on heaven, He yearns to receive on earth.

What sort of people are we if we want to receive, when God offers, but when God asks, we refuse to give? … I ask you, brethren: when you come to church, what do you want? What are you looking for? Is it anything other than mercy? Then give earthly mercy and you will receive the heavenly kind. … Hear Christ saying ‘Give and it will be given to you.’ I do not know how you can have the effrontery to want to receive what you do not want to give.

As we criticize those people around us – including our political leaders as well as enemies and strangers – we need to look in the mirror before making any move or opening our mouths.

Or as author Jodi Picoult imagines God asking: “I know you love me. The question is, how much?”