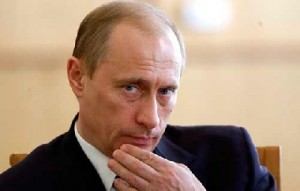 To the uninitiated, Vladimir Putin has seemingly just undertaken what President Obama might call a “reset” of the Russian political landscape. In fact, the prime minister’s announcement Saturday that he would swap offices with the current president, Dmitry Medvedev, just clarifies an abiding reality:  There is not, and since at least 2000 never has been, any power center in Moscow other than Putin, the former KGB operative-turned-authoritarian kleptocrat.

The real question is whether that revelation will make it impossible for the Obama administration to persist in its delusion that a conciliatory U.S. policy towards Russia will encourage the Kremlin to moderate its repression at home and its aggressiveness abroad?

To date, this American reset with Russia has certainly done nothing to ameliorate the plight of journalists, human rights attorneys and activists, independent businessmen and other opposition figures who have become, under the de facto Putin regime, literally endangered species.  Neither has it dissuaded the Kremlin from: using energy weapons to force what Putin calls “the near abroad” and even Europe to submit to his demands; selling vast quantities of advanced arms to the world’s most dangerous regimes; meddling in the Middle East, Central Asia, Latin America, Europe and anywhere else that the Kremlin’s influence can be expanded at the United States’ expense; and exploiting U.S. dependence on Russia for everything from access to Afghanistan to access for our astronauts to the space station.

In particular, Obama’s reset with Putin’s Russia has failed to diminish the Kremlin’s continuing commitment to the modernization of its arsenal of strategic and tactical nuclear weapons.  While the former has shrunk with the retirement of Soviet-era long-range missiles andsubmarines, what remains is being systematically upgraded with modern warheads and platforms.  As my Center for Security Policy colleague, Ben Lerner, observes in a forthcoming white paper on the misbegotten New START Treaty, U.S. negotiators ignored this reality and gave away the store in the hope of persuading Moscow to join in the President’s fantasy of “ridding the world of nuclear weapons.”

Notably, Team Obama gave up on long-range missile defenses of Europe and the United States based in Poland and the Czech Republic to appease Moscow.  His representatives reportedly approved language the Russians drafted giving them what amounts to a veto over future “quantitative or qualitative improvements” to U.S. anti-missile systems.

Obama and Company also agreed to terms in New START that forced us to dismantle strategic weapons, but not the Russians.  Worse yet, the Kremlin got to keep its entire, vast arsenal of shorter-range, relatively low-yield “tactical” arms.  By some estimates, they enjoy a 10-to-1 advantage in such weapons.

Even more ominous is the fact that some of those weapons are believed to be aboard cruise missile-armed submarines known to operate within striking distance of our coasts.  And like Russia’s strategic forces, these tactical weapons are being upgraded — in some cases with advanced technologies whose military effects, and therefore lethality, are not fullyunderstood by our weapons designers.

In the course of what passed for the Senate ratification debate on New START during the lame duck session late last year, administration spokesmen blithely assured skeptics that the next treaty with Moscow would capture tactical weapons and otherwise correct the myriad deficiencies of the 2010 accord.

On the basis of such dubious promises, Senator Lamar Alexander and a handful of other Republicans joined all Senate Democrats to provide the necessary two-thirds majority. Sen. Alexander evidently enjoyed so much the favorable press and other accolades he achieved for breaking ranks with the rest of the GOP leadership that he has just announced that he will give up his post as chairman of theSenate Republican Policy Committee – presumably in the interest of having more latitude to engage in such defections in the future.

As with other Obama delusions, there has never been any basis for believing the Russians would give up weapons that they assert could be used to shape and prevail in tomorrow’s battles.  Even if, against all odds, the Kremlin were to agree to curbs on tactical nuclear weapons, their relatively small size and ease of portability means that any such limitations would be inherently unverifiable.

No worries.  According to the Washington Times’ invaluable “Inside the Ring” column, the administration will not be dissuaded from its goal of ridding at least America of its nuclear arms by Vladimir Putin’s continuing recalcitrance or other obstacles.  Columnist Bill Gertz reports that Gary Samore, the top arms control guru on President Obama’s National Security Council, “noted that if there is no agreement or treaty, ‘even unilateral’ cuts are being considered.”

In other words, despite the fact that Russia’s once-and-future president is not going along — and, for that matter, neither is any other nuclear weapon state, the Obama administration blithely plans to reset America’s deterrent.  Gone will be the time-tested strategic Triad of intercontinental-range bombers and land- and sea-based missiles.  If we are lucky, we will be left with a far-less-resilient “Dyad” equipped with obsolescing, untested weapons.  Never mind that the world is becoming more dangerous by the day; a new study dubbed a mini-Nuclear Posture Review has been ordered up to justify such unilateral disarmament.

With the successive budget cuts eviscerating our conventional forces, it is not clear how much of a fight the military leadership will put up to preserve weapons that may be the ultimate guarantor of our security but that some deem unusable.  Expect no complaints from Vladimir Putin and his friends.  This is just the sort of reset — read, self-inflicted American wound — that he relishes most.