Trending Now
You are at:Home»Featured»Quis ut Deus? A Reminder on the Place of Politics
By Kevin Symonds on October 13, 2012 Featured, Society & Common Good 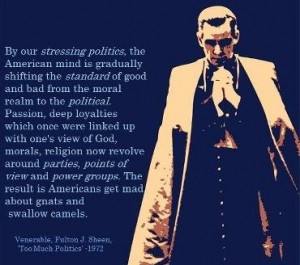 While following political developments, I became nonplussed but could not name why.  As I was puzzling-out my thoughts, I unexpectedly received assistance from the Servant of God, Archbishop Fulton J. Sheen.  I would like to share my observations and reflect for a moment on the place of politics in society.

Sheen said the following back in 1972:

By our stressing politics, the American mind is gradually shifting the standard of good and bad from the moral realm to the political.  Passions, deep loyalties which once were linked up with one’s view of God, morals, religion now revolve around parties, points of view and power groups.  The result is Americans get mad about the wrong things.  They strain gnats and swallow camels.[i]

I believe Sheen points to a very important problem happening right now: the Social Kingship of Jesus Christ has been written right out of the discussions.

At first, the above statement may seem incredulous.  After all do we not see the many religious groups/organizations fighting the culture wars of today?  This fact does not concern me.  Rather, my concern is a silent enemy creeping into the mindset of those fighting the culture wars.  That enemy is secularist thinking through what Sheen calls the “stressing of politics.”

Consider the following questions: to whom do Christians (and other like-minded Americans) turn for a resolution to, say, the sin of abortion?  What about same-sex “marriage” or “religious liberty”?  There are countless efforts to effect change through voting the “right” political candidate into office, which not a few end in disappointment when the politician fails to deliver.  Perhaps in no other issue do we see this more prominently than in abortion where this issue continues to remain a political football and is never resolved.

The issues of our day will never be resolved because we almost never hear them within the context of morality.  I submit two reasons for this.  The first is argument and logic, in which the Church has the superior position and experience.  The second is relativism which does one of three things: whittle morality down to some “common denominator,” question which “morality” is the acceptable one (followed up usually with the matter of Church and State), or it asks “who are you to impose your morality on me?”

The above three things form nothing less than a challenge, one that must be taken up by God-fearing Christians who believe whole-heartedly in the Social Kingship of Jesus Christ.   It is this fact of Christ’s mission as Priest, Prophet and King that ought to serve as the foundation for Christian activity in the social order.  Sadly, however, it seems we are all too often happy to compromise the Faith so as to eat out of the hand of an ever-increasing secular government.

As Christians, we need to keep our priorities in order.  The spiritual life comes first, the social realm second.  We are bound to spreading the kingdom of heaven in our lives and that kingdom is spiritual, concerned with spiritual things.[ii]  We ought to be spending more time working on hearts than political processes.  Let us remember the words of Pope Leo XIII:

The moral training…should be a foundation for the development and the application of the great principles of morality and religion, as bearing on men’s conduct within the family, and in the social sphere.  Scientific instruction will give you learned and clever young men and women; religious education will give you, on the contrary, honest and virtuous citizens.  Instruction, separated from education so called, serves rather to fill young hearts with vanity than to discipline them aright.  It is quite otherwise with a right education; such a training, under the guidance of religion, which is the regulator of the heart of man, and the inspirer of pure and generous affections, knows how to implant and to cultivate virtue in the most illiterate souls without the aid of much scientific polishing or instruction….[iii]

If Christians do not focus upon their primary tasks, they will, as Archbishop Sheen notes, strain gnats and swallow camels.  The principle is simple: work on hearts and the social realm will be affected.[iv]

While working on hearts, there is one’s civic duty of participating in public life.  In fulfilling this duty, Christians should be preaching Christ crucified (1 Corinthians 1:23).  For this, St. Paul says, is a scandal to the Jews and foolishness to the Gentiles.  That last part, foolishness to the Gentiles, is something we ought to consider more deeply in our situation.

It has become a hallmark within the contemporary climate (with liberalism controlling the thermostat) to be embarrassed of Jesus Christ.  Imagine that!  The very Person through whom all things were created is the one we would rather not mention in “polite” conversation, lest we “offend” someone.  What is the real scandal?

Have Christians become so jaded by liberalism and its atheistic principles that we have admitted a silent defeat and joined ranks with the enemy?  If Christ is the measure, then we have to acknowledge the Social Kingship of Jesus Christ.  It is time for Catholics to recognize they have traded their identity for favor with society.

To effect real change, it is first necessary to remember “a true renewal of the Church is obtained with a sincere spirit of repentance and a demanding process of conversion.”[v]  We need to confess we have sinned against God and do penance.  Secondly, we must meet the rigorous demands of conversion.  To this end, I suggest we take up the great charters of the Popes, the Papal Encyclicals, and study them.  These documents are a call to battle and we need to know the mind of the Church if we are going to enter into the combat.

In the meantime, if you want to watch a funny, yet serious video that demonstrates the above points, please watch the following video:

[iii] James Joseph McGovern, The Life and Life-Work of Pope Leo XIII.  (Chicago: Allied Printing, 1903), 192-193.  Online resource at this link.  The quote dates back to before Leo became Pope.

[iv] Furthermore, not to focus on hearts runs the risk of turning our religious organizations into simple social institutions.  This is a grave error, not only in itself, but it also risks jeopardizing our eternal salvation—for we placed our faith not in God but in man.