Trending Now
You are at:Home»Featured»Religious or Not, Human Power Untethered From Reality is Tyranny
By Robert J. Gieb on August 30, 2011 Featured, Law & Justice 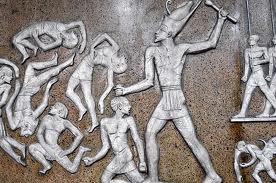 Before American troops arrived in Afghanistan, Christians were jailed and sometime killed for their faith by the Taliban government. The persecution has already resumed in areas where the Taliban is resurgent.

Closer to home, a Protestant minister was brought up on charges in Canada for repeating the Christian teaching, unchallenged for centuries, that sodomy is immoral and should not be promoted. Christians who speak out on the true meaning of marriage in San Francisco are harassed by the hyper-secular local government. The archdiocese of Boston quit providing adoption services because it was threatened with legal action by the state government if it did not agree to provide those services to homosexual partners.

The former loses its connection to reality, even to (especially to) God who is the Creator of all things, and disintegrates into the frenzied chaos of relativism amidst religious cult. The latter is reduced to merely the empirically verifiable, making it unable to understand anything more than the mechanics of nature, and thereby cutting itself off from all other reality, even from (especially from) God. Therefore, like the theocratic state untethered from the Divine Plan, the Godless and faithless state also collapses into relativism. Both then are turned in on themselves and closed off from the transcendent, with no immutable moral principles to guide them.

The God of Christianity is a God of Reason. He has created a universe that is intelligible and He reveals Himself in His creation. While His revelation is, ultimately, mystery, and will be fully understood only when we come face to face with Him, we are in our earthly life able to understand the contours and many details of that revelation.

As Pope Benedict XVI said in his 2006 address at Regensburg, God is logos. He is not sola voluntas. In making this point he cited Ibn Hazm, an 11th century Muslim theologian of Cordova. Hazm, said the pope, “went so far as to state that God is not bound even by his own word, and that nothing would oblige him to reveal the truth to us. Were it God’s will, we would even have to practice idolatry.”

But God has chosen to be bound by his own Word. The moral principles meant to guide our lives do not rest on whimsy. The Ten Commandments will not be changed next week. St. Paul had it right: “This saying is trustworthy: If we have died with him we shall also live with him; if we persevere we shall also reign with him. But if we deny him he will deny us. If we are unfaithful he remains faithful, for he cannot deny himself. 2 Tim 2:11-13”

The reasonless theocracy ultimately manufactures a new god to replace the true God, whose creation and Divine Plan it has rejected. That new god looks and acts not surprisingly very much like its human creators. Eventually good and evil and the dignity of man are reduced to the whims of those theocratic creators.

The citizens of the faithless state, which refuses to recognize humanity’s connection to the transcendent, fare no better. Answers to the overarching questions in the hearts of all human beings about the nature and purpose of existence, the way to genuine peace and happiness, and the ultimate disposition of our being upon death are not found in a science lab, a philosophy classroom, a courtroom, or a legislative chamber.  In fact, if questions of good and evil and the ground of human rights are answered only by empirical evidence and positive law, the sure and expected result is a utilitarian morality that is no different than that which is produced by the religious relativism of the theocrats.

So we must ask again: Is there any real difference between some theocratic society where human blood is shed by religious mullahs and shamans to appease a whimsical god of their own creation, and the bloodshed caused by the political mullahs and shamans of the French revolution or of Russian and Chinese communism to justify their political theories? Or, what is the difference between the brutally secular police state of North Korea and the brutally religious theocracy of Iran or the Taliban of Afghanistan? Asking the same question differently, what will the institutions of the West be like if the current secular movement to sever all ties to its Judeo-Christian heritage is successful? Will that not be, as Yogi Berra put it, déjà vu all over again?

The answer is not hard to come by. The rise of totalitarianism and the abuse of human rights that follows-whether arising from the religious or the secular-is assured when either religion and faith are excluded from the political and social arena or reason is segregated from faith.

As Pope Benedict has reminded us on countless occasions, the Godless state that wants to create a just society without reference to the transcendent and without the proper understanding of the role of the individual as the true moral agent, who works to change society and forms the moral influence and basis for a just society, is doomed. The concept of a politically constructed just society rests on the premise that the state itself can be a good moral agent, imposing its constructs on its citizens. At some point this process terminates in rampant utilitarianism where matters of good and evil, and the dignity of man are left to the bureaucrats to define and to enforce.

But as the pope also told us in his 2006 Regensburg address, society created by religious zealots and extremists who cut religion off from reason are no less dangerous. Indeed as the entire world has observed, when the theocrats cut religion off from reason they end up cutting the heads off their citizens. They have no interest in merely being a correcting and leavening influence in the public arena. Reasonless faith disconnected from the incarnated Logos-Reason itself!-mutates from true religion and communion with the Divine to the arrogant and frequently violent isolation of the inbred. The public square then is not a place for discourse, evangelization, and conversion, but rather dominion and enslavement for all except (if only initially) those who pledge their souls to the manufactured god created to justify that dominion. Although the theocrats see themselves as wise, they are not. A wisdom that comes from an ersatz transcendence is an ersatz wisdom, and relativism will soon enough become the coin of the realm.

In summary then, whether through the rigid secular state without faith or the rigidly reasonless theocracy, the result is the same: a corruption of the Creator’s will as expressed in His creation and Revelation. In either event the true God is either exiled or re-created in man’s own image. Society in both cases sinks into violence, the first born offspring of relativism.

Finally, it is important to remember that in each instance the Church is unwelcome because the Church is the Prophet of truth and the accuser of those who deform the truth. Its leaders and members should never forget that they who carry the message of truth to the public arena should expect to receive no better reception than did He who is Truth itself.